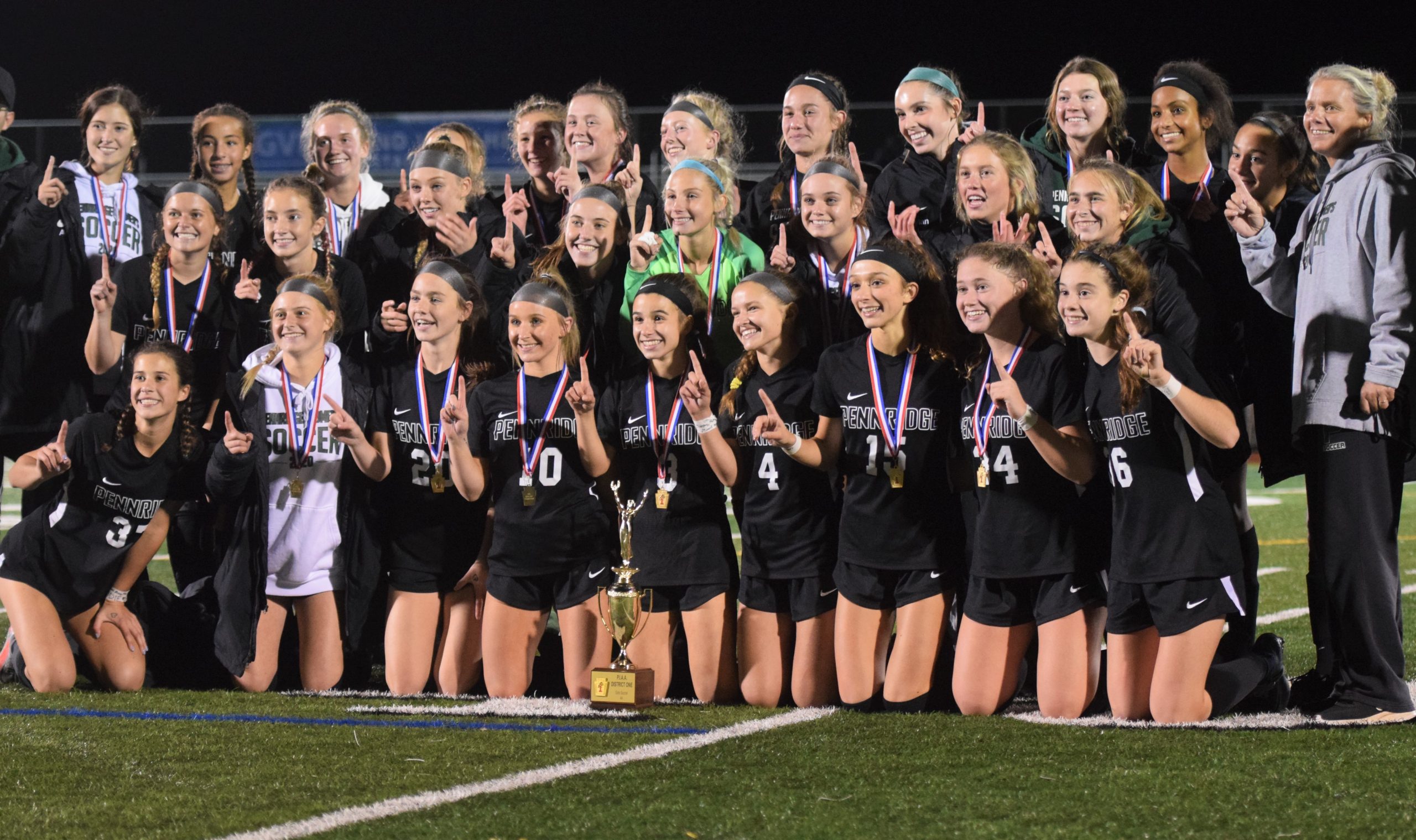 The Pennridge girls soccer team poses with the District 1 trophy after repeating as champion Thursday night in a 2-0 win over Spring-Ford. (Austin Hertzog - MediaNews Group)

EAST ROCKHILL >> Lindsey DeHaven took the District 1 medal off her neck so it could go to a teammate, feigned a tear then went right back to smiling and dancing with her teammates.

For the second straight year, the Pennridge girls’ soccer program had won the District 1 Class 4A title, but with the oddities of a season under COVID-19, the Rams had done it on their own field and with no boys’ to follow. They weren’t going to waste a chance to celebrate, especially knowing how hard it had been to get past Spring-Ford and keep the trophy.

In a high-level championship game, No. 3 Pennridge topped No. 5 Spring-Ford 2-0 in the battle of the Rams with both teams giving an effort worthy of the stakes. Two of the district’s best teams throughout the pandemic-compressed season, both sides seemed to be on a collision course once the bracket got sorted out. On paper, it looked like a clash of stellar defense against a high-powered offense but what materialized was just a high-tempo, high-intensity clash between two committed groups.

DeHaven said her team was up for the challenge especially knowing the quality of the visiting Rams, who had won their previous three district games by 1-0 scorelines. Pennridge on the other hand, had scored 12 goals in three playoff games and knew its best chance was to be at its swarming, pressing best.

“It’s just us all putting our heads together,” senior center back Cady McKean said. “We all have one goal as a team and it’s so important we all think the same thing, put our energy together and play for each other on the field.” Spring-Ford’s rugged defense looked the part through much of the first half, with junior center back Olivia Curry breaking apart build-ups and sweeping out chances left and right while keeper Riley Wallace pushed away some early Pennridge looks.

Pennridge’s defense was equally as dug-in, with McKean and freshman Anna Croyle cleaning up the back all night while keeper Sierra Shaeffer had one of her best games of the season, denying three golden chances for Spring-Ford.

What made the night so difficult for the visiting Rams was the swarm of host Rams that seemed to appear around the ball every time a Spring-Ford player got it to their feet. Pennridge felt it lacked energy in Tuesday’s semifinal win over Abington, but refused to let anyone be the let-off with the title at stake Thursday.

“The better team won tonight. That’s a really, really good Pennridge team and the result was correct,” Spring-Ford coach Tim Raub said. “We had the scouting report on them, they did what they did well and were better than us. That’s the idea of a press defense, counter up the field, press the ball higher and you can gamble more in the attacking third. They do it well and are going to be a real dangerous team here down the stretch.”

Pennridge’s first goal came, naturally, due to its pressure. After the back line won the ball, midfielder Jess Levush played a targeted ball up the field with forward Sophie Craig fighting a defender to keep the play alive.

The ball rolled across open field where junior Riley Hepler ran onto it and unleashed a wicked right-footed bomb into the back corner of the goal with 15:52 left in the first half.

“We had to continue to put our heads down and work hard,” Hepler said. “It really started at the back line. I saw the goal, so I was going to take a one-time shot. I’m always looking for the corner when I shoot but I would say it was more the luck of where it came from and how I got my foot on it.” Early in the second half, Spring-Ford forward Ally McVey showed her team had far from exhausted its fight by taking the ball through the Pennridge defense, denying the swarm a chance to gather and ripping a shot that unfortunately for her hit the outside netting. It was a sign to Pennridge that it’s already high energy wasn’t enough.

So, the Rams just turned it up even more. The forward group of Hepler, Leah Malone, Sophie Craig, Lindsey Balmer and Tori Angelo were just as involved defensively pressuring as they were attacking but Angelo in particular became a menace in the second half.

“You have to give these girls credit for working so hard, especially not knowing what to expect of them in these big moments,” Pennridge coach Audrey Anderson said. “We talked in our team room before the game that we have what it takes but it was going to take everything we have. That second push in the second half showed how much more we have.” Angelo was relentless, making run after run on the right side and forcing Spring-Ford to deal with her and in turn, give Pennridge opportunities. One of those runs got the hosts a throw-in that would eventually lead to their second goal.

DeHaven and Hepler combined to play the ball across the box, where freshman Liv Grenda controlled it and pulled in three Spring-Ford defenders. Making the right read, Grenda played a short ball to her left that Malone hammered in off her first touch with a half-hour to play.

GIRLS SOCCER 29:43 2nd half: Pennridge 2, Spring-Ford 0
Leah Malone punches in the goal after a great read and pass by Liv Grenda off Kera Dam’s throw pic.twitter.com/WQjRuumInC

“Knowing people are behind you or next to you the whole time, it makes the game easier to get through,” DeHaven said. “I really feel like this team plays as a family and we know we need every single person on the field to win a game and that’s the mentality we go into every single game with.”

The loss ended Spring-Ford’s season with a 13-2-1 record, an extremely successful run by any metrics but especially in a year where only one team will play in the state tournament and the PAC didn’t contest a playoff. Raub, in his first year with the program, lauded his team’s willingness to buy into what he and assistant Rob Rooney wanted to do and the seniors for setting a standard that helped the program return to prominence.

Players like Wallace, Hope Flanegin, Emily Higgins, Caitlin Norwood and the rest of the seniors not only earned a share of the PAC title this fall but demanded the very best out of Pennridge in a championship setting.

“That’s been the way we’ve been all season,” Raub said. “This is a special group. I have enjoyed every moment of working with these girls. They’re hard-working, dedicated kids but they’re gritty and have moxie. My heart breaks for them knowing for a lot of these girls, it’s their last time on a field together.” Pennridge advances to the PIAA semifinals on Nov. 17 where the Rams will face either District XI champion Parkland or District 4 winner Williamsport. While the team welcomes the weekend of rest, it also wants to try and keep the level of play in Thursday’s second half going into Tuesday’s match.

The Rams are still laser-focused on a state title and McKean felt that would be all the drive they needed to keep pressuring and keep working next week. For one night however, there was a celebration worthy of the accomplishment and the caliber of opponent that had to be overcome.

“Props to them, they’re the best team we’ve played and they played a great game,” Hepler said. “I think it was just effort for us, honestly. We did not want to lose on our home field and we knew this was a must-win game to get to our main goal of winning a state championship.”