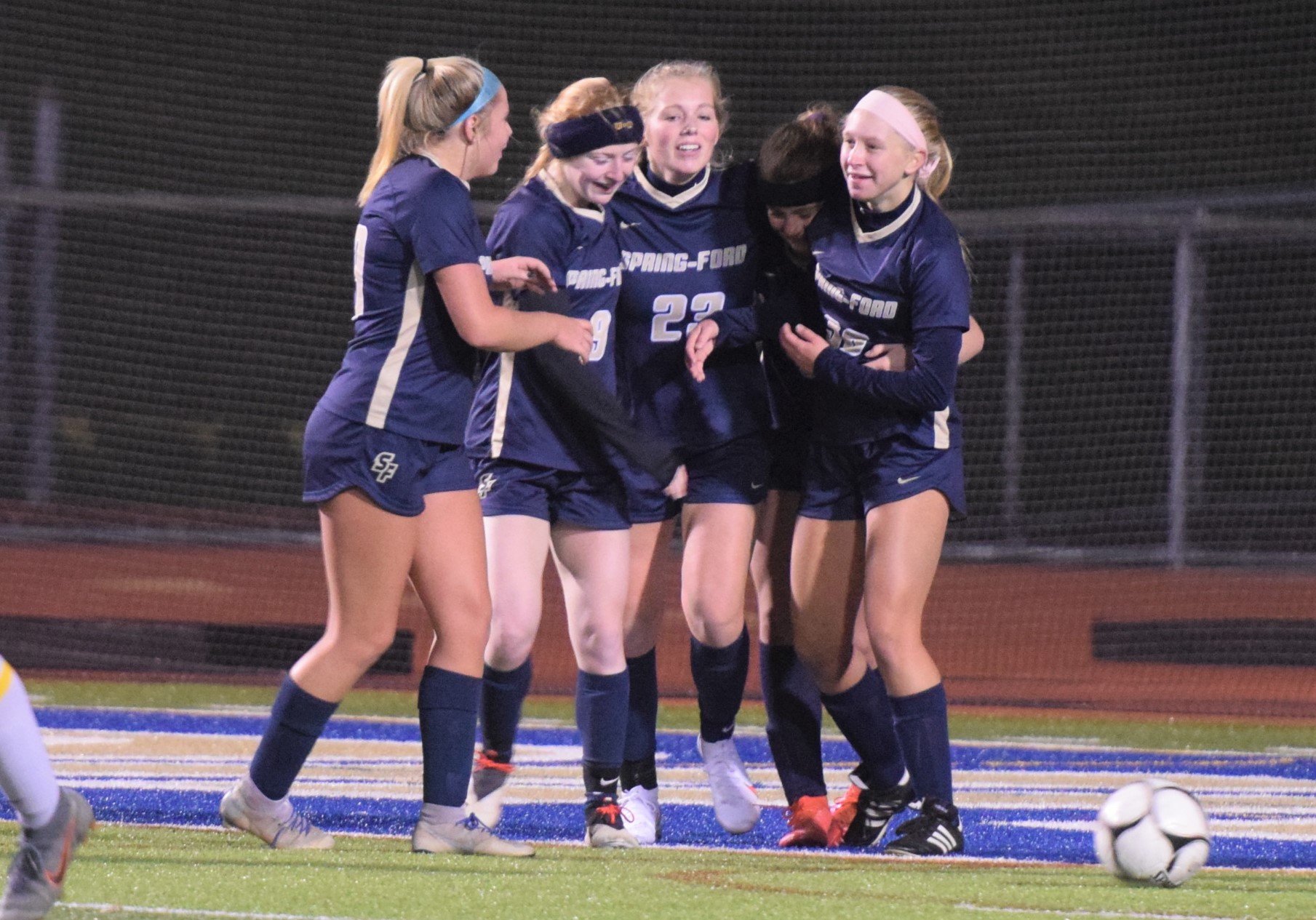 Every year from 2006 to 2019, the Pioneer Athletic Conference girls soccer championship was decided by a playoff final.

This year amid the COVID-19 pandemic, the league chose to forego a league playoff and base its champion on regular season league record.

The PAC’s runaway top 2, Spring-Ford and Owen J. Roberts, tied and were left to share the prize.

Nothing will be shared on Thursday in the District 1-4A quarterfinals, a match made possible by No. 5 Spring-Ford’s 1-0 victory over No. 12 Central Bucks West thanks to Liv Curry’s second half goal in the first round Monday night at Spring-Ford’s Coach McNelly Stadium.

Junior center back Curry finished an end-line cross from senior Emily Higgins in the 63rd minute to break a deadlock against a formidable Bucks (6-4-1) opponent that gave Spring-Ford (11-1-1) a tough matchup. It was the Wisconsin commit’s first career Spring-Ford goal.

“We outworked them in the game and I felt like we really deserved it. I thought we had a good match against them,” said senior midfielder Molly Thomas. “They were really physical. It felt so nice to beat a team that was so into the game and physical.”

Thomas saw some similarities to the style of the Rams’ next opponent, Owen J. Roberts, and was thankful to have a challenging game in the leadup to the PAC rivals’ next encounter.

“It was definitely good to be tested, especially because they play a similar style to Owen J.,” Thomas said. “It’s a good preparation for us, especially since Owen J. hasn’t played for a week and a half and we just came off a good win so I think we’ll have momentum.”

Owen J. Roberts reached the second round via non-traditional route – No. 13 Unionville forfeited their first round match due to a player’s positive COVID case.

Spring-Ford had to do it on the field but did so with its eight shutout in 13 games as senior goalkeeper Riley Wallace needed to make just four saves.

Wallace praised the job of her center back pairing, Curry and senior Caitlin Norwood, for their contributions this fall.

“I really like the way Liv and Caitlin Norwood in the back are playing,” the four-year starting keeper said. “Caitlin’s really good at clearing the ball and Liv is able to shut anybody down. You can’t really dribble past Liv.”

Curry was a force throughout and did well to limit CB West’s junior playmaker Taylor Moyer, who had a hand in the bulk of the Bucks’ scoring while finishing second in the Suburban One Continental.

The chance of the game that didn’t result in a goal came thanks to a scrambling double save by CB West goalkeeper Jenna Abaza after S-F’s Ally McVey got behind the defense 12 minutes into the game. Abaza (6 saves), a four-year starter, handled the first attempt and recovered with a dive to keep out the rebound attempt.

Thomas feels good about the form Spring-Ford is in amid the most challenging time of the season.

“I think in the beginning of the season things obviously clicked when we played Boyertown (6-0 win in season opener) because we were shot out of a cannon but then I feel like we had a little bit of a lull. But now in playoff time everyone is playing for each other I think,” Thomas said. “We’ve been playing good. This is our best team since I’ve been here.”

The Pioneer Athletic Conference didn’t hold an official league final. But the Rams’ players were happy to find a way around that.

“This does kind of feel like our PAC championship honestly,” Wallace said of the impending match against OJR.

“I think playing them for a third time since we both have a win, I think that’s going to be our PAC championship,” Thomas said. “We were tied for everything. We have a chance to knock them off this season. This will be the biggest game of the season and I can’t wait to play.”