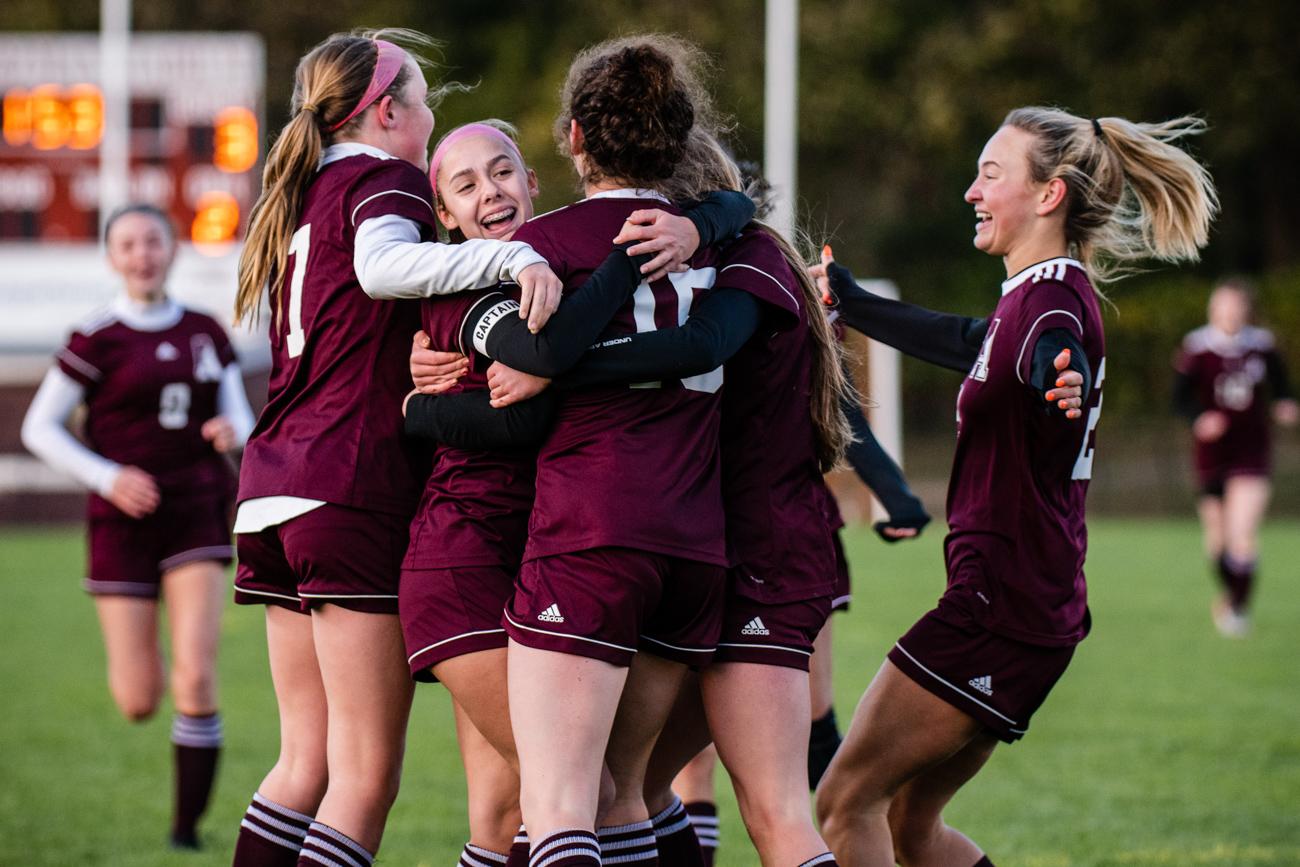 The Abington Ghosts surround Casey Touey (22) after she scores the tying goal against West Chester Rustin in their District 1-4A first round game on Monday, Nov. 2, 2020 at Abington High School. (James Beaver/For MediaNews Group)

ABINGTON >> Casey Touey walked off her home field at halftime knowing she hadn’t been good enough.

The Abington senior co-captain’s team follows her lead and knew it had to be better in the next 40 minutes or the Ghosts’ season would be over. But if Touey and Abington proved anything in the month-plus leading into Monday’s District 1-4A opener, it’s that they don’t quit.

Spurred by Touey and some superb defensive plays, the No. 2 Ghosts rallied to beat No. 15 West Chester Rustin 3-2 and advanced to Thursday’s quarterfinals.

“In the first half, it wasn’t really working for me,” Touey said. “I didn’t have a good touch on the ball, I wasn’t getting any good shots off and at halftime, I reflected on that. I know that I’m better than that and I had to push myself harder.

“I told myself this very well might be the last time I step on this field, so I might as well give it everything I had and that’s how I got the mentality to score.” Abington’s Lanae Wilson-Mattson (5) sends the ball upfield just out of the reach of Rustin’s Mia Amen (8) outstretched leg during their District 1-4A first round game on Monday, Nov. 2, 2020. (James Beaver/For MediaNews Group)

While Abington couldn’t have thought of a more nightmarish start, it was exactly the kind of opener the visiting Golden Knights wanted. A strong wind carried at their backs and the Knights saw a slow-starting Abington team ripe for an early stunner.

That’s exactly what Rustin gave the hosts. Ellie Keefer hit a shot from long range that caught the wind and sailed over the keeper for a 1-0 lead just 4:04 into the match. The Knights weren’t done, turning a counter into a second goal less than two minutes later.

Forward Mia Amen’s run pulled the keeper out, then froze her when Amen lofted a ball to the far post that Sarah Johnston tapped in from the doorstep on a trailing run.

“What’s been really nice about our girls is that they play so well together as a team and once they find their attacking momentum, they really connect and bring it forward,” Rustin coach Ashley Ainsworth said. “In the first 10 minutes, putting away two goals was that momentum working for us as we figured it out as a team.”

Abington settled in after the rude awakening, but for all the work the Ghosts were putting into the attack, they had little to show for it. Whether it was set pieces or shots from the run of play, Abington struggled to put much of anything on target, leaving them to retreat to their bench at half frustrated.

Senior co-captain Ally Holden noted the team’s attitude wasn’t a defeated one and the Ghosts knew they had to be more productive in the second half.

“It’s a mentality, you just have to want it more,” Holden, a center back, said. “We came out to start and you could we definitely didn’t want it more but in the second half, we changed that. We came back, wanted it and played our game.”

Like Rustin had started fast in the first half, the Ghosts would start fast in the second. A foul gave Abington a free kick on the left flank, which sophomore Maura Day hit right into the middle of the box where Touey touched past a defender and fired.

The senior turned and gave a yell of approval as the ball rustled the netting and Abington felt its confidence coming back.

Four minutes later, Touey struck again. Some hard work by Piper McGinley, Touey and Carley Slavin in the center of the field led to Slavin hitting a through ball to Touey and the Drexel-bound senior did the rest by going in and chipping the keeper at the near post.

“We talked about it at halftime, but we weren’t nearly as aggressive as we should have been,” Touey said. “When we lost the ball, we weren’t eager to get it back so we talked about putting pressure on as soon as you lose it because it will cause a mistake and we’ll break the defense down that way.” Abington goalkeeper Alexis Ditri (11) makes a huge save on a penalty kick late in the second half to maintain a 3-2 lead over West Chester Rustin during their District 1-4A first round game on Monday, Nov. 2, 2020. (James Beaver/For MediaNews Group)

After Touey tied it with 31 minutes to play, Holden bailed her team out when she booted a ball off the goal line about four minutes later. The senior, along with center back partner Caroline Holden, really buckled down in the second half and recovered well anytime the Knights stormed back their way off a counter.

The eventual winning goal came 10 minutes after the equalizer. Slavin found McGinley, who drew in the defense before slotting a through ball out to Myana Bebee-Gomberg on the right and the senior skillfully slipped a shot just inside the far post.

“We usually emphasize playing to feet and we have players who know how to finish the ball in the back of the net,” Holden said. “We just did that more in the second half.”

Abington has split keepers all season, with junior Alexis Ditri getting the second half. Last week, Ditri had to sit and watch with her arm in a sling after an injury but at the team’s last practice, she told coach Rick Tompkins she was ready to come back.

With 17:48 to play, the Knights drew a penalty kick, putting Ditri to task. Diving to her right, the junior stonewalled the PK, keeping her team in the lead.

“Even with her arm in a sling, she’s trying to get me to let her play and practice so I told her to relax and she’d be there when we needed her,” Tompkins said. “She definitely picked us up there.”

Ainsworth said her one regret on the season was that the Knights didn’t get more games together to see how much more they would have grown. While they lose a good group of seniors including co-captains Emma Pelkowski, Katie Chisholm and Jama Keefer, they return eight on Monday’s 11 starters.

“What’s nice about our team is that we have strength in every grade level,” Ainsworth said. “We have several freshmen who stepped up this year and that’s setting a really nice precedent for the coming years. All of the girls, no matter who or how much time they’re getting, they’ve all done really well out there.” Tompkins has cited his team’s chemistry as one of its biggest strengths, right next to its no-quit mentality and knew getting to extend their time together was important to everyone, not just the seniors.

“It means everything to me, especially during these times, soccer is pretty much all that we have,” Touey said. “We would do anything to keep playing and that reflected tonight. We wanted it more and that’s why we get to keep playing on Thursday.”