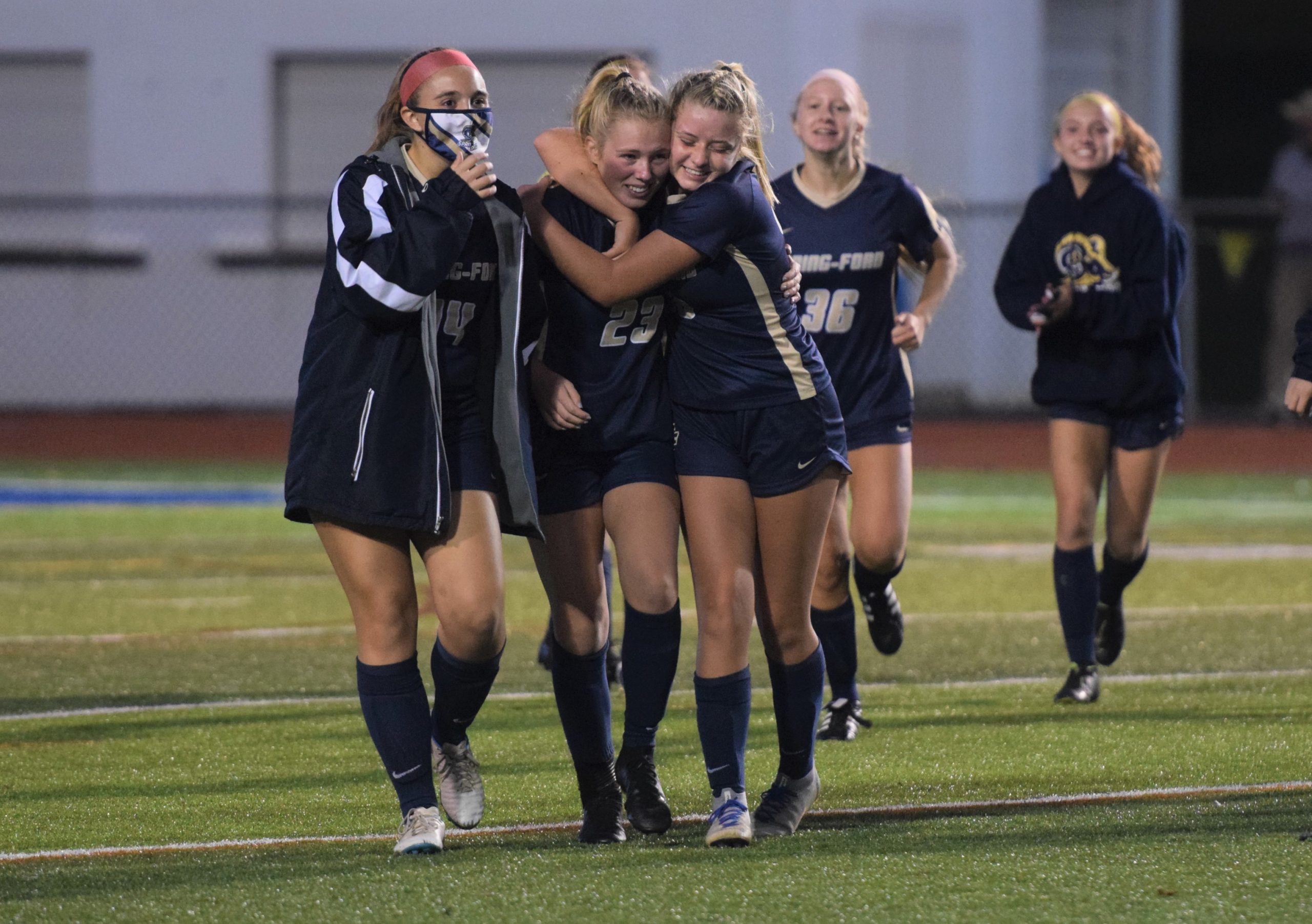 Or, if history truly is written by the victors, he can just change who his words were directed to during overtime of Saturday afternoon’s clash with Owen J. Roberts.

“Don’t waste it,” Raub lamented when junior right back Raven Wellington played a speculative cross across the 18-yard line following a quick throw-in.

Junior Emily Higgins, despite being 50 yards away, somehow had those words running through her brain.

Higgins certainly did not waste her chance when Wellington’s cross made its way through to the on-rushing left winger and she blasted a one-timer into the near side of goal to give Spring-Ford a 3-2 overtime victory over previously unbeaten Owen J. Roberts in a battle of the Pioneer Athletic Conference’s top two teams at Coach McNelly Stadium.

“I saw Raven going up to cross the ball and I knew where she was going to cross it,” Higgins said. “What was going through my head was, ‘This has to be in the back of the net. I have to shoot this as hard as I can so the goalie can’t stop it.’

“Once I shot it, I saw all my teammates’ faces and we all fell into a (celebratory) pile. It was such a great feeling.”

Senior midfielder Hope Flanegin scored goals in each half, the first cancelling out Alexa Vogelman’s penalty kick in the 14th minute for OJR. Flanegin was assisted by Ally McVey on the opener to make it 1-1 at halftime, and she scored on a towering header from a corner kick by fellow senior middie Molly Thomas in the 64th minute.

The Wildcats found a late leveler on senior defender Emily Sands’ looping header of a Sarah Kopec corner kick to make it 2-2 with 6:27 left in regulation.

The Rams grew into the game and by overtime were in the ascendancy, a deserving winner when Wellington’s low cross found Higgins’ boot at the 6:25 mark of the first overtime.

“We were all looking forward to this game,” said Flanegin. “They’re a really good team; they outplayed us last time and have really good chemistry. We were excited to play them again.”

There will be no PAC playoffs this season – the league champion will be determined from a 12-game regular season between the seven programs that began the season Sept. 25 – so the head-to-head matchup had a big-game feel with the winner holding the inside track to the title.

“Spring-Ford hasn’t won a big game with this class of kids so this is our first chance to be there and put ourselves in position,” Raub said. “Have we won anything yet? No. But we’ve at least put destiny in our own hands and that’s the important thing.”

The previous matchup was a major motivator for the Rams on Saturday, recognizing their PAC championship dreams would effectively be over with a loss.

“Our goal was to get revenge for the first game because obviously we lost and we felt like our season was on the line, that we have to win no matter what,” Higgins said. “I think the team was rallied up. We all wanted it, we knew our (PAC championship chances) could be at an end tonight so I think we accomplished our goal.”

Spring-Ford had not conceded a goal to any other team this season (six shutouts). While it couldn’t add to its clean sheet total, junior defender Olivia Curry, who made life very difficult for PAC leading scorer Vogelman, felt the Rams imposed themselves on the game.

“This season is shortened and this is the only team we’ve lost to – other than that we’ve had all shutouts and we’ve played very good soccer,” said the Wisconsin commit. “For some reason last time against OJR we let them make us play their game. Tonight I felt like we made them play ours.”

Curry was joined by Wellington, senior Caitlin Norwood and sophomore Maddie O’Donnell on the back line with senior Riley Wallace in goal (3 saves).

It was largely a battle in the midfield, S-F’s Flanegin, Thomas and junior Reese Kershner combatting OJR’s Kopec, Gabby Koury and Sabrina Marks.

Raub was thrilled with the entire performance, but especially the play of standouts Thomas and Curry.

“Molly is that kid that stays connected with our back line. You often don’t notice her on the field because she’s doing well,” Raub said. “Playing in the 6 (holding midfielder) like that, if they’re doing their job they blend into the game. The minute they make a mistake it’s amplified. But Molly is an unsung hero for us. She kept everything out to Vogelman’s feet.

“And Liv Curry was unreal. She played like a Big Ten player and the best player in this league, like we know she is.”

The game very well could have ended in regulation if not for OJR goalkeeper Sam Hughes, who came up with saves on a pair of Ally McVey breakaways in each half on the way to eight saves.

Despite playing it to overtime, OJR coach Joe Margusity felt the right team won the day.

“I really think that they were the better team today. They had a real plan. We can’t have our ‘A’ game everyday, not to take anything away from them. They caused us to play that way. It was the boxer versus the puncher. They were the boxer, they had the better possession.”

He’s confident the loss won’t linger as the Wildcats look toward the rest of the PAC season and the District 1 playoffs, which begin Monday, Nov. 2.

“It’s a good learning lesson for districts. I expect them to bounce back well,” Margusity said. “They know they gave the game away there at the end by not communicating properly. We’ll go back and look at it on film, learn from it and build from there.”

As for Coach Raub and his sideline comment, wrong rarely feels so right.

“I’m perfectly thrilled with being wrong. I’ve never been happier. (Higgins) came out of nowhere. She followed from the back post and it’s something we’ve worked on all season. She put it away with a great finish.”