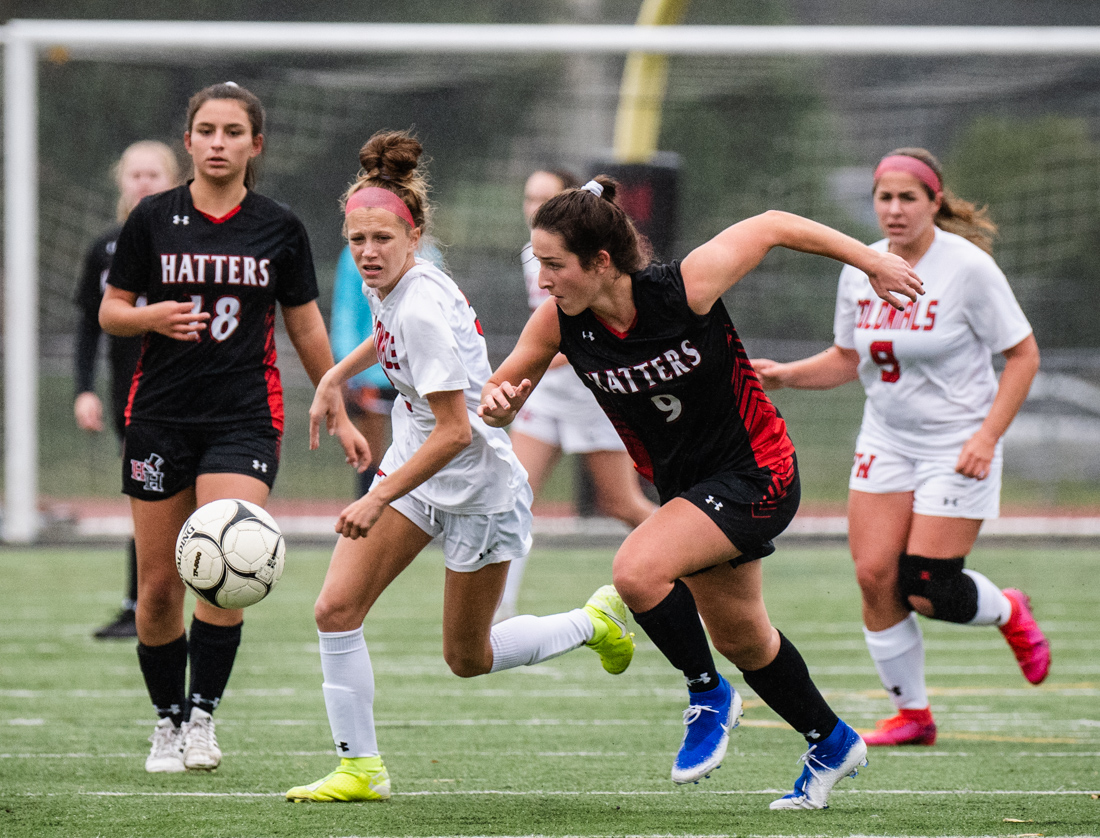 HORSHAM >> Effort isn’t something tracked in statistics, but there was plenty of it between Hatboro-Horsham and Plymouth Whitemarsh.

The Hatters and Colonials girls soccer teams, meeting for the first leg of a home-and-away series to open the week in Horsham, played one of their typical low-scoring grinder matches where statistics only said so much. Hatboro-Horsham’s ability to generate chances didn’t reflect in the score while PW got plenty of effort from a lineup that likely hadn’t seen the field together before the first whistle.

In the end, the Hatters were able to put one chance away and it was all they needed to edge the Colonials 1-0 on a rainy Monday afternoon.

“I think we played way better as a team and this was one of the best games we’ve played so far,” Hatters winger Caroline Shegogue said. “We’ve been passing in to the middle and back out wide, and that’s led to a lot of opportunities for crosses which we scored on today.”

Shegogue, a sophomore, supplied the cross that led to the only goal of the afternoon early in the second half. The winger was just as active putting balls on frame, having three attempts stopped by PW freshman Caitlyn Dinh including an effort that was parried off the crossbar and just missed crossing the goal line. In total, the Hatters put 16 shots on net to go with a handful of tries that narrowly missed the target, putting the Colonials’ makeshift back line under a lot of pressure. With a multitude of key players out for a multitude of reasons, it’s all hands on deck for Plymouth Whitemarsh with three more games still on tap for the week.

“They did a really nice job,” PW coach Ryan Zehren said. “Raya had a good game in I think just her second start, Brianna Reynolds I don’t think played a varsity minute before and played all 80 today.”

Ianniello and Gauntlett started in front of Dinh in the team’s last game against Quakertown while Caffery was deployed as a midfielder. With Caffery moving to the back line and freshman Reynolds being inserted, it was yet another combination for the Colonials to work through.

Dinh was also excellent in goal, making 14 saves to keep her team in the game.

“I have to give credit to assistant coach (TJ) DeLucia, he really coaches up the back line and did a nice job preparing them,” Zehren said. “Everything was really last minute today but he talked to them pregame and did a great job of laying out who was playing what position, what their jobs would be and what they needed to do.”

In previous games this fall, the Hatters would fall back on two or three players to carry the bulk of the offensive responsibility. While they have skilled players like Emily Thomas and Maggie O’Neill who can do that, a defensively solid team like PW can take that away.

Shegogue added that it also led to the ball getting stuck in the middle against previous opponents where on Monday, it came out wide more and more. Again, there’s no stat for stretching out a defense and sending in a cross, but as the first half wore on, Hatboro-Horsham saw that could be a productive outlet.

“We saw the openings and have a strong attacking top three, so we knew we could take them on,” O’Neill, a senior, said. “We just tried to get some shots up and keep them coming.”

O’Neill was a bit unlucky to not score on Monday, hitting the post on a second half strike with the keeper well out of net, but her ability to either play wide and serve the ball in or take on defenders led to several of the Hatters’ better looks. The first half did lead to a lot of half-finished attacks with the Hatters stringing passes to find a service but then nobody making the trailing run into the areas where the ball was going.

“It’s important to stay patient,” O’Neill said. “We talked about it at the half, as long as we play hard in the offensive third; it’s eventually going to come. Today, it did.” The goal came fittingly off a cross. Freshman Emma Levin carried the ball into the final third and played it back to Shegogue on the right wing, who took her bit of space and fired a pass across the front of the Colonials goal. O’Neill made an early run to draw the keeper’s attention, but the ball carried past both.

Its flight carried to Thomas bunched up between two PW defenders, where the ball made enough contact with the jumble of legs and feet to direct into the net with less than two minutes expired in the second half.

“Honestly, I was just crossing it and hoping someone would be there to kick it in,” Shegogue said.

“We have trust in each other,” O’Neill added. “There’s a lot of talent up top, so as long as we continue to combine and work together, we’re going to score.”

PW, aside from hosting the Hatters on Tuesday, also has a back-to-back with Upper Dublin scheduled for Thursday and Friday. The Colonials aren’t making excuses for who may be out and instead are asking the next set of players up to fill in the best they can.

“It could be a completely different game (Tuesday), it could be 4-3, you have no idea,” Zehren said. “That’s the exciting thing and paying attention to all these league games, almost everything has been tight. For the most part, everybody has been in every game and that’s the best thing you can ask for in this league.” It’s also an important week for the Hatters, who host Abington in a pivotal match for the SOL Liberty standings on Thursday. Hatboro-Horsham won the SOL American last fall, and their only loss thus far came to the Ghosts in their first meeting.

O’Neill said that at the beginning of the season, the Hatters didn’t realize they had the talent to win the conference again but now that they’ve seen it come together, they’re eager to try and make up that one game difference.

To do that, the Hatters will first have to get by the Colonials again and as coach Kelsey Daley noted, that’s far from a given outcome no matter how much effort her team brings to the field.

“Tomorrow can be a completely different game, it’s on their home field and we seem to struggle when we play there,” Daley said. “I told them if we win out, we have the chance to become league champs again and I don’t think it had processed with this team yet. Finally hearing that, I think it really fired them up for the competitive week we have lined up.”

Lower Merion’s Audrey Brown is Main Line Girls Athlete of the Week
Phoenixville football back on track to start games, all other fall sports approved