With college career on hold, Stevenson back home with Pennridge 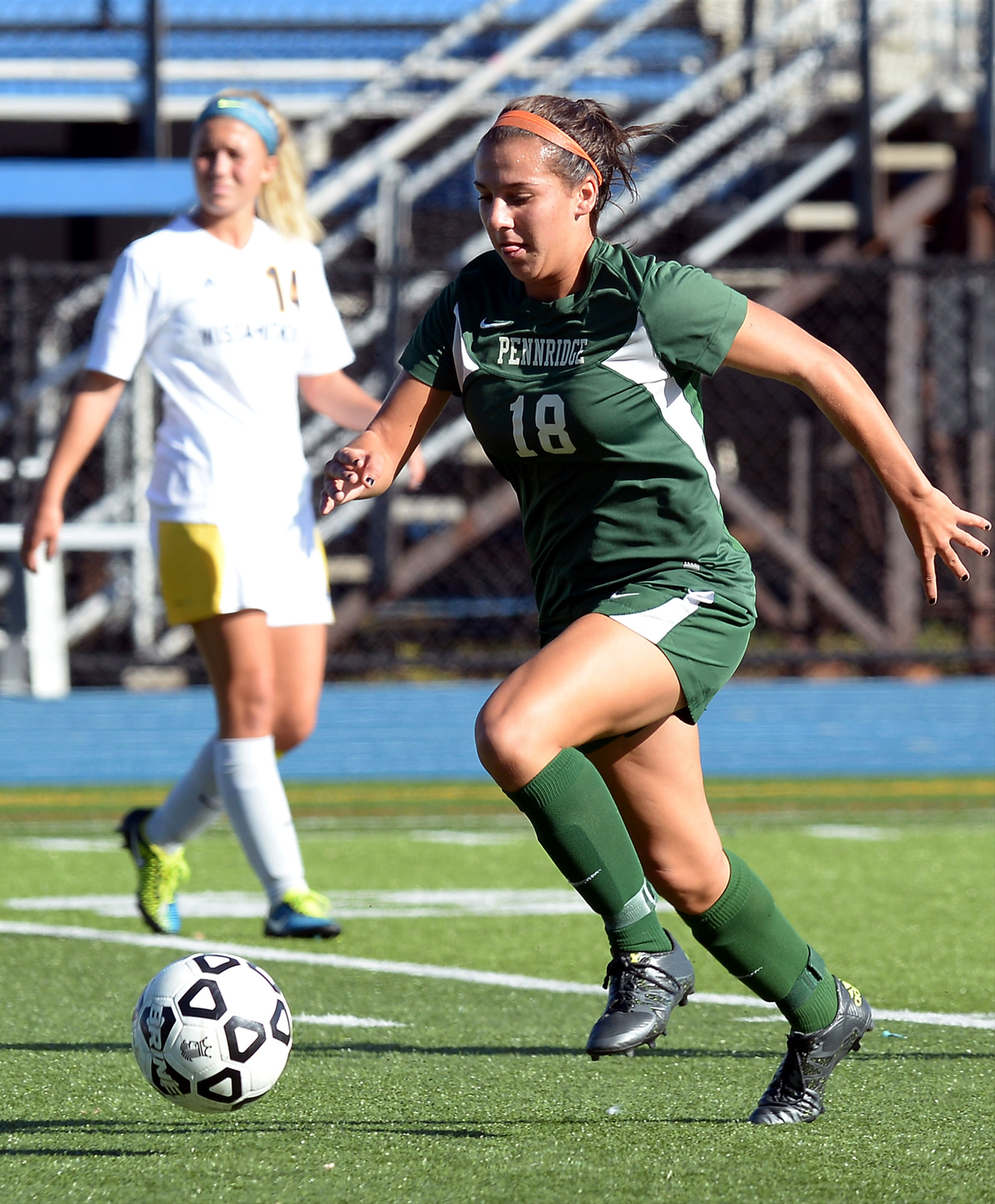 Pennridge's Erin Stevenson moves the ball up field against Wissahickon during their game on Oct. 5, 2015. Bob Raines/MediaNews Group File)

Erin Stevenson is home in more than one way.

The 2017 Pennridge graduate should be playing her senior year with UMBC’s women’s soccer team this fall, but due to COVID-19, the Retrievers and their parent conference in the America East have pushed their season to the spring. Instead of going back to Maryland, Stevenson opted to spend this semester back home in Sellersville and needing something to do, reached out to her old program.

It turned out to be stroke of good luck in a bad situation as Stevenson is serving as Pennridge’s JV coach and assistant with the Rams girls soccer team this fall.

“I love it, I love being a part of this program,” Stevenson said prior to coaching the JV against Souderton on Thursday. “Being back with these girls, it’s great seeing they’re still doing the same traditions we were doing. It’s a good experience to be back here.”

The Reporter Girls Soccer Player of the Year after her senior year at Pennridge, Stevenson was known for her unmatched intensity on the field. Her play as a senior was a major catalyst in leading the Rams to the District 1 title match and second round of states and while UMBC hasn’t had the same success, Stevenson has been a mainstay in the lineup since arriving on campus.

Stevenson said since deciding to stay home this fall, she’s started to think about her future after college but also weigh some options with the NCAA’s response to the coronavirus. Fall athletes are being given an extra year of eligibility whether their team competes this fall, this spring, both seasons or not at all and Stevenson admitted it’s given her some things to consider.

Right now, she’s enjoying being around the sport she’s played her whole life from a different perspective.

“Soccer’s always going to be a part of my life so any way I can get around it, I’m going to,” Stevenson said. “It’s definitely different. No one knew this would all happen but as an athlete, you have to be ready for anything to happen and be ready to change your mentality.”

Knowing she’d be around, Stevenson texted Rams coach Audrey Anderson and asked if she could come help out her old team. It so happened Pennridge needed a JV coach and Stevenson eagerly accepted the role.

Someone with the type of intensity Stevenson brings to the field doesn’t just turn it off and she’s not shied away from bringing to coaching.

“It hasn’t changed, that’s for sure,” Stevenson said. “At Pennridge, there’s such a high standard you’re being held to and I told them I’m not going to treat them any different than the varsity girls and we’re working to get you to varsity so we’re going to do everything we can to keep the intensity high.”

Rams freshman Liv Grenda, a starter on varsity, grew up going to Pennridge games and saw plenty of Stevenson as a player. While JV and varsity don’t always practice together, just having the former All-SOL midfielder around has been like giving the 2020 team an open book on how to reach the program’s standards.

“I always remembered her being super-aggressive and I know it’s something I need to work on,” Grenda said. “Seeing her play, it means something when she tells you to be aggressive.”

Stevenson said she couldn’t hide her desire to be on the field during the Rams’ 2-1 varsity win over Souderton on Thursday and that feeling of competing is what she has missed most this fall.

Senior Lindsey DeHaven, a High Point recruit, has taken over Stevenson’s old position at holding midfield.  While DeHaven has proven herself as an All-SOL performer, it’s her first season in the role and she is trying her best to live up to it.

“I’ve been looking up to her ever since I was a little kid watching her play and it is a little intimidating having her watching me,” DeHaven said. “She has a lot of expectations for this team but at the same time, it is fun trying to match those expectations, be better and impress her.”

Stevenson left a plenty big mark when she graduated from Pennridge, but moving on from home often brings new experience and wisdom and she’s grateful for the chance to share some of that with the next generation of Rams players.

“I tell them go have fun, but leave it all out on the field and don’t regret anything when you come off.”

LEXOW IN THE MIDDLE

The past two seasons, Abington’s Bryce Lexow lined up as a winger for the Ghosts boys soccer team.

This fall, the senior co-captain is in a new spot in the starting lineup but having a strong impact for 3-1 Abington. As one of the tallest players on the Ghosts roster and being skilled on the ball, Lexow is now playing alongside co-captain Gavin O’Neill as a center mid. “They put me in the middle to try to slow everything down and control the ball,” Lexow said after scoring the winner in Tuesday’s 3-2 victory at Hatboro-Horsham. “I think I’m good on the ball technically and able to win headers, so being in the middle, I can go either way with the ball. I’m just looking to distribute as much as possible.”

Abington had its unbeaten start snapped in a 3-0 loss to Plymouth Whitemarsh on Thursday, making the second half of the SOL Liberty race still wide open.

The Lower Moreland girls soccer team has had a lot to deal with already.

Not only are the Lions now in a brand new league, moving from the Bicentennial Athletic League to the Suburban One League this fall, but they have a new coach in Mike Gould and an unwanted rash of injuries to deal with. Gould, a Lower Moreland graduate who just finished a career with Cabrini’s men’s soccer program, has helped the team navigate the ups and downs as Lower Moreland sits at 2-0-1.

“I think it’s all due to the senior leadership,” Gould said. “Amy Zeisinger, Paige Malpezzi and Maggie McGarry are healthy and have been great leaders. Sara Matraku and Phoebe Lynch are done for the season but have been like additional coaches for me.”

Lynch was the most recent injury and an unfortunate one. After scoring both goals for the Lions in their first win of the season, the striker injured her knee and had to shut down for the rest of the season.

It’s put a lot of pressure on Lower Moreland’s underclassmen, which includes five freshmen and three sophomores in the starting lineup. Gould also coaches with Huntingdon Valley Athletic Association (HVAA), a cornerstone for young athletes in the Lower Moreland community.

“The freshman group is really coachable and I think a lot of it has to do with the fact all these girls have played at HVAA at some point so they came through the same system together,” Gould said. “It creates a family culture.”