Catholic League is now a go for fall sports, but the Del Val says no 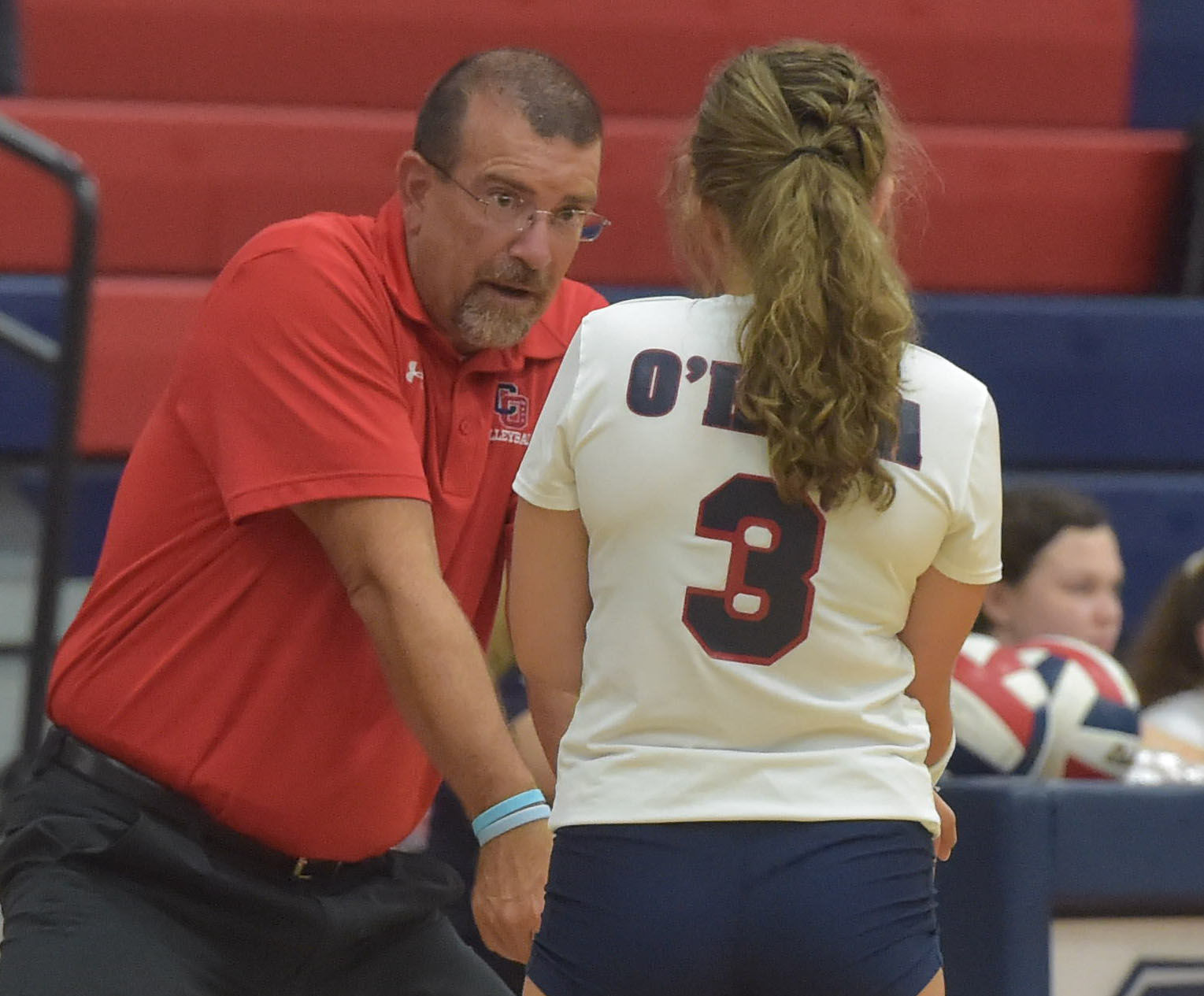 Cardinal O'Hara volleyball coach Bill Collins, left, gives instruction to his daughter Emily, who is a senior setter for the Lions. (MNG File)

The Catholic League has reversed course and will resume fall sports. The Del Val League will stay the course, choosing not to play its fall season until 2021.

The Office of Catholic Education and Faith in the Future Foundation announced late Friday afternoon that the 17 high schools in the Archdiocese of Philadelphia “may resume interscholastic athletic competition while continuing to strictly follow health and safety guidelines.”

That is an about-face of the Aug. 24 announcement to postpone fall sports until the New Year.

“Since the late August announcement, our school administrators have worked closely with senior leadership from the Office of Catholic Education and Faith in the Future to meticulously study pandemic metrics, guidelines, and school COVID profiles as part of our continuous assessment process,” Sister Maureen L. McDermott, the superintendent for secondary schools for the Archdiocese of Philadelphia, said in a statement. “After carefully reviewing all possible factors, including the successful opening of our schools, we believe the environment has changed for the better over the past month.

“We understand and value the importance of athletics as part of the program of formation within our high schools,” Sister McDermott went on to say. “We express our gratitude to our school communities for their trust and support while we appropriately deliberated how to bring back athletic programs with a commitment to safety in these unprecedented times.”

The Catholic League is the third league with Delco schools as members to reverse course. The Central and Ches-Mont Leagues announced earlier this week that it will resume the fall season in the coming weeks.

There was no mention in the release as to when teams can start practicing or begin playing games, whether it would be league-only competition or if teams would be able to take part in the PIAA playoffs or just hold a league-wide playoff format. Teams must have a minimum of 15 practice sessions before competition may begin. A district spokesperson did not respond to an email regarding those questions. Several coaches contacted by phone said all comments had to come from the office of communications.

Collins said he could live with a league-only playoff.

“I’d rather have the whole thing, but I’m not going to argue about having districts or states,” Collins said. “These kids are getting a chance to get back in the gym and play. That’s all I care about, so I’m happy.”

The announcement by the Archdiocese came several hours after the Del Val League said it was sticking to its decision of Aug. 14 to postpone the fall sports season until 2021.

“The Del Val League has revisited the start of fall sports considering some school districts are beginning to return to their buildings,” the league said in a statement. “The Del Val Athletic Directors, Principals, and Superintendents have worked together over the last few weeks to try to establish a full season for our student-athletes. Unfortunately, we shut down for the safety of all our school communities, and we continue to stay shut down for the same reason. The Del Val Athletic Association knows that athletics play an integral role in the students’ lives and we are planning in conjunction with the PIAA to proceed with a fall season at an alternative time. The well-being of our school community is, and will continue to be, our priority and focus.”

Penn Wood athletic director Rap Curry said the league’s five athletic directors came up with a plan for a return that included four games in football and six in sports such as boys and girls soccer, field hockey and volleyball. However a major stumbling block is that three of the schools are not close to returning to in-person classes.

“We were unanimous in the decision that all of us had to be completely on board with all the steps that we were going to follow collectively and there were just a couple of steps that we could not iron out,” Curry said. “Safety was our first priority and we just decided that we couldn’t pull it off right now.

“We were trying to hammer out all the details about how we would go about the games. We were also trying to go about how we were going to spread out the schedule so we wouldn’t only have one game a day. We were also trying to figure out the concerns that people were going to face internally for a couple of our schools that wouldn’t be back in school at that time. We just found out that trying to solve all those problems as a group and individually wasn’t going to be in an environment that we felt we could function in.”

“It’s unfortunate for student-athletes who are trying to find a collegiate home,” Chester football coach Ladonday Bell said. “Hopefully, January brings opportunity to have a season.”

Curry said the plan is to start with the winter season, then move into the fall and spring seasons. However, he said that he was not sure if the winter season would start on time as scheduled or if the league will hold off until the New Year. Practice for the winter season is slated to start Nov. 20 with games beginning on Dec. 11.

“We still have to work out those details with District 1, not only have games between ourselves, but hopefully have some nonleague opponents as well, just in order to give our kids more opportunities,” Curry said.