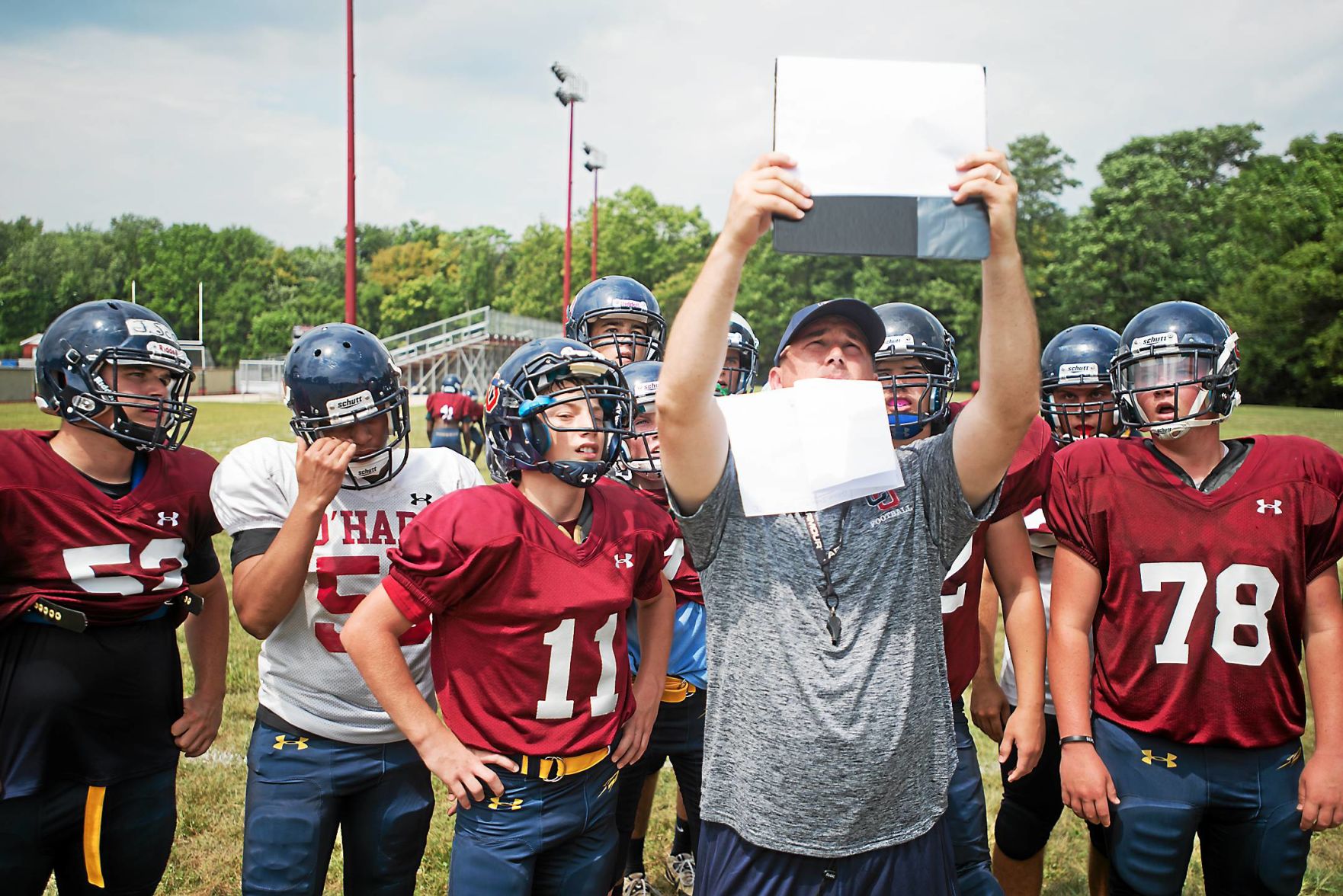 In a normal year, Cardinal O'Hara football coach and athletic director B.J. Hogan, center, would be preparing for the start of practice next week. However, the Catholic League, along with the Ches-Mont League, have pushed the start of the fall season back due to the coronavirus pandemic.

The Philadelphia Catholic and Ches-Mont leagues Wednesday made the call to delay the start of their fall sports seasons.

In a statement on the league’s website, the PCL Board of Directors voted unanimously to push back fall sports until Aug. 31, which would mark the start of heat acclimatization week for football teams.

“The PCL is committed to a safe return to competition, but the safety and welfare of our student-athletes, coaches and athletic staffs is the primary focus,” said Joseph McFadden, who is the chairman of the PCL Board of Governors and principal at Archbishop Ryan. “We hope our student-athletes can enjoy a competitive and safe athletic experience this fall if the opportunity presents itself.”

According to the West Chester Daily Local, the Ches-Mont League has revised its fall sports schedule, as well. Athletic directors voted Wednesday to begin heat acclimatization Sept. 7 and no football games will be played prior to the weekend of Sept. 24-25. Sun Valley is the Ches-Mont’s only Delaware County member.

The Del Val League, which has not announced plans to delay its season, is in the middle of a two-year scheduling partnership with Ches-Mont schools. The Ches-Mont’s decision to delay sports will no doubt have an impact on the Del Val, which consists of only five members — Academy Park, Chester, Chichester, Interboro and Penn Wood.

In the Catholic League, the opening week of football contests will take place the weekend of Sept. 18-19. Strength and conditioning workouts for football players will continue through the end of this week.

Student-athletes competing in cross country, golf, soccer, tennis and volleyball will begin practice Monday, Sept 14. Games will get under way Oct. 2-3. The Catholic League has opted to play a league-only schedule in all sports, mimicking the decision the Inter-Ac League (a non-PIAA conference) made earlier this week.

Cardinal O’Hara athletic director and football head coach BJ Hogan believes all non-football sports could have a complete District 12 and PIAA postseason, provided the PIAA votes to move forward with postseason championships. The PIAA steering committee will meet Aug. 26 to decide the fate of state tournaments in the fall.

“With the two divisions (Blue and Red), the Blue Division is where it’s going to get jammed up with all the sports because we’re going to lose the first two weeks of competition. It’s going to depend on the PIAA. They’re going to come out on (Aug.) 26 whether they’re going to have districts and states (playoffs) or whether they’re going to move up the state championships so we kind of won’t know until then,” Hogan said. “We’re planning on district and state playoffs for field hockey, soccer, volleyball. We feel we can start them on Oct. 5 and still be done in plenty of time to have playoffs. I think the district deadline is Nov. 18 or 19. Football is the only sport that gets a little crazy because you can’t play more than once a week.

“The key is going to be the PIAA on Aug. 26. If they say there’s no state playoffs, but you can do districts, at least we can figure that out. How does District 1 in football go on (with playoffs)? They have 16 teams (in Classes 6A and 5A). How do they figure that out if there is a state playoff? You’re going to have to play four league games and go right to playoffs. How do you sort that out.”

Athletic directors from the Central League are expected to meet Monday to decide the league’s plan for fall sports. Penncrest was the first Delco school to push the start of its fall practices back to Aug. 24. Because teams must have three full weeks of practices before competition can begin, the earliest that Penncrest teams can play games is Friday, Sept. 11.

Chester was the first Delco school to announce that it will operate virtually in September. Pennsylvania Gov. Tom Wolf said last week it would be unfeasible for virtual schools to have sports in the fall.

“If the school is going completely virtual, it seems hard to justify having in-person contact sports being played in the fall,” Wolf said.

Tom Quintois, the athletic director and girls soccer coach at Archbishop Carroll, is happy the PCL came to an agreement on a plan instead of just an outright cancellation to the fall sports campaign.

“To be honest, I’m thrilled to death that we’re having a season at all. All that matters is that kids are healthy and playing sports, and quite frankly, I’ll take whatever they’re going to give us,” Quintois said. “In talking to parents, we were saying, it’s going to be a delay, let’s get the kids into school, let’s show everybody that we can keep everybody healthy and safe, and then let’s get back at it and try to get this season in. My only concern is getting the kids healthy to play sports.”

Needless to say, plenty has yet to be decided regarding high school sports in Pennsylvania. And the top priority remains the health and safety of the students.

“I’m scared out of my mind for our athletes at O’Hara,” Hogan said. “We need to be in school and we need sports just because we’re a tuition-driven school, but how are we going to keep our kids safe?”