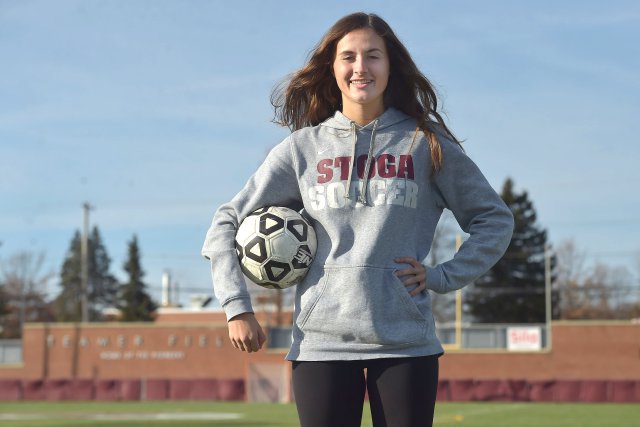 TREDYFFRIN >> It may sound familiar: a Daily Local News’ Player of the Year in soccer who hails from Conestoga High School and has the last name of Donovan.

In 2017, it was a two-time All-American who led the Pioneers to the state championship game and was headed to play Division I soccer in college. And two years later, the name and resume remain exactly the same.

Siblings Chris and Caitlin Donovan have been competing and pushing each other for a long time. So it should come as no surprise that a couple years after Chris was honored as the area’s best boys player, his younger sister is now repeating the feat.

“They followed a pretty similar trajectory through their four years of high school,” said Ben Wilson, the head coach of the girls’ program at ’Stoga.

“It’s always a competition with me and my brother,” Caitlin acknowledged. “Chris set the standards pretty high, so I’ve always wanted to strive to achieve what he has.”

The only children of Karen and Dave Donovan have been challenging each other in everything from school grades to video games to athletics. And soccer seemed to be a focal point.

“We were so close growing up and we spent a lot of time together,” Caitlin explained. “We would play soccer in the living room with a mini soccer ball, and actually used the hearth of the fireplace as the goal.

“We’d do that every chance we could for years, and it was a lot of fun,” she laughed. “But plenty of stuff got broken and our parents weren’t too happy about that.”

Chris is now a sophomore and the leader scorer at Drexel. Caitlin is headed to crosstown rival La Salle, coming off a fantastic senior season at ’Stoga .

“Chris has had a huge impact on me,” she said. “He’s always been a great role model for me. I would always watch his high school and club soccer games to try and learn as much as I could.”

An attacking center midfielder, Caitlin led Chester County with 33 goals and chipped in nine assists this fall. It was the fourth straight year she was the Pioneers’ leading scorer. In all, she amassed 82 career goals.

“She’s been our leader on attack since she was a freshman,” Wilson said.

“I am a hungry player who is always looking to score goals and put my teammates in positions to where they can score,” she added.

Donovan was the key cog for a team that captured its third straight Central League title and advanced all the way to the state title game. The United Soccer Coaches Association subsequently named her the state’s top player and put her on its All-American team.

“Caitlin was not only scoring a lot of goals, she was helped building a lot of scoring chances for Calista (Courtney) and McKenzie (Coleman, who combined to score 35),” Wilson said. “She kind of terrorized teams with how dynamic she is on the ball. She definitely was a big part of our success.”

In addition, Donovan was named the Central League co-MVP, and was a repeat selection for All-State, All-Region and All-American honors. She supplied the game-winning goal in double digit matches this season, including a win over Pennridge in the state semifinal.

“She actually scored all of those goals while only playing about half of those games because we didn’t want to run up scores,” Wilson pointed out. “She probably would have scored 100 goals the last two years if we just would have let her do here thing.” “It goes back to before I can even remember,” she said.

When Wilson first saw Donovan as a freshman, two things stood out: that she was able to control the ball better than anyone, and that she was a natural goal scorer.

“The ball is kind of glued to her foot,” he said. “And lot of players have to have a perfect setup to score a goal, but Caitlin can score any way she wants to, with header, long-range shots, curl the ball with both feet.

“She is pretty ambidextrous. Her feet move so quick sometimes it’s like her feet are too fast for her body. But she is still able to keep the ball under control.”

Donovan made big strides between her sophomore and junior seasons thanks to work in the weight room. By then she had already verbally committed to La Salle. And even though national powers eventually showed interest, she is sticking with the Explorers.

“She could play anywhere in the country,” Wilson said.

“When I went on my visit, I just knew it was the right place for me,” Donovan added. “I love the coaches and the whole program. I think it will be a good fit for me.”

And a new rivalry with her older brother is already starting to take shape.

“We just recently watched the La Salle men’s basketball team beat Drexel, so there were a few comments back and forth during that,” she said.

“But the rivalry is definitely a good thing. It just made me a lot more competitive growing up – trying to keep up with my older brother.”

The decade that was: The All-Delco database in the 2010s
DLN ALL-AREA: Girls Soccer 1st Team, 2nd Team, Honorable Mention & Coach of the Year