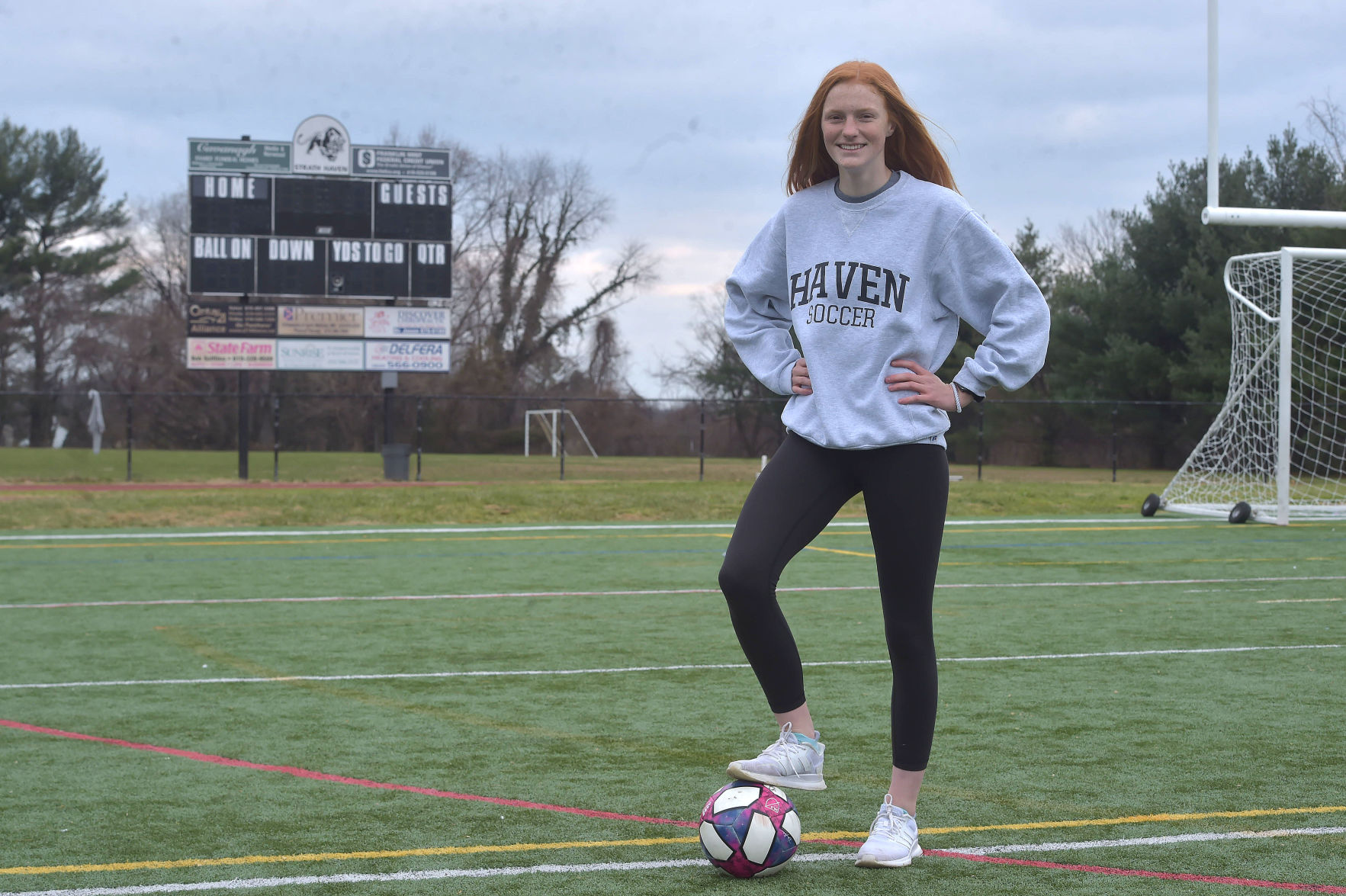 Maggie Forbes, following in the athletic footsteps of her older sisters, has evolved into a leader of Strath Haven's girls soccer team, and has been selected as the Daily Times Player of the Year. (Pete Bannan/MediaNews Group)

The CliffsNotes version: Maddie Forbes was a track All-Delco. So was Grace Forbes, times three, plus a two-time Girls Track and Field Athlete of the Year. In her only season of cross country, Grace was the Girls Runner of the Year. Both now run at Rice University.

But Maggie also knows that soccer is pretty popular around the Forbes household. Maddie, a speedy winger, was a starter for Strath Haven in her day. It was a difficult decision for Grace to drop soccer after three years and focus on cross country last fall.

Maggie has followed her older sisters in their soccer/track time-sharing. But the junior is the only one to prioritize soccer in that arrangement. While her older sisters certainly had an affinity for the sport, the demands of the track eventually won out. Strath Haven’s Maggie Forbes, left in this shot from a game against Unionville, assumed a leadership role for the Panthers this season, helping to lead them back to the state tournament for the first time since 2012. (DFM File)

Maggie, however, is bucking that trend.

“I definitely like soccer,” she said. “It’s hard for me to rank them. I like them both for different reasons. I think I really like the team aspect of soccer and it’s not just the individual. Track can be a team sport, too, but it’s not the same. You play countless games with your teammates and you just get really close with soccer. I value that a lot.”

It doesn’t take long watching Forbes in the middle of the pitch to feel like it’s where she belongs. With her long, loping strides that focus into quick, adroit movements on the ball and her long red hair trailing her movements across the field, Forbes has a blend of size, speed and technical ability perfectly adapted for the demands of the midfield engine room. Whether she’s tracking down an opponent with the ball or turning to connect combination passes, it’s not hard to see why soccer has won out in the contention for her considerable athletic gifts.

The Strath Haven program is certainly better off for it.

With Forbes in the middle of everything, Strath Haven won 14 games this season, making its first PIAA tournament since 2012. For that level of achievement, Forbes is the 2019 Daily Times Player of the Year.

Forbes and Payton are two-time All-Delcos. Only seven of the 12 selections are seniors. Snopkowski, Polsky, Forbes and Shiller are juniors, while Kuzemka is on the team as a sophomore. The All-Delco team is selected in consultation with area coaches.

Forbes qualified as a veteran leader for the Panthers this season. On a team where only two seniors started regularly, the power was undoubtedly housed in the junior class. Forbes’ level of play even from a young age dictated that she would ascend to a leadership role sooner rather than later.

All-Delco Girls Soccer: Leyden made all the stops as Agnes Irwin soared in Inter-Ac

For someone naturally soft-spoken, Forbes’ developing talent and experience helped her assume that full leadership task.

“I’ve always wanted to be able to be a great teammate but also being able to tell others what to do or support them, and helping them make the right decision was also a good thing to be able to do,” she said. “Having a voice as an upperclassman, when you’re an underclassman, you feel a little less. You can’t sort of tell the upperclassmen what to do. But now it was nice to be able to say like, ‘hey come slide in this way’ or something like that.”

It helps that Forbes seemed to have chemistry that looked natural with most of her mates. She’s been at Nether Providence Soccer Club for years (now at 1776 United FC), but only senior goalie Claire Wolgast is a teammate there. The connections she’s formed in midfield were more organic but looked like those dating back years.

She and junior midfielder Ellie Malek form a daunting pair in central midfield, one so strong that it compelled coach Gino Miraglia to drag Malek back from a run at forward. That connection extended to classmate Gianna Zweier, whose absence in the postseason due to injury was evident.

Then there’s the money connection between Forbes and Kuzemka, which yielded many of Forbes’ 13 goals. It’s how Forbes deposited both of the tallies in the District 1 Class 3A semifinal against Nazareth, the win that sent Haven to its first state tournament since 2012.

Kuzemka didn’t play varsity as a freshman due to a knee injury, but you wouldn’t know that this was the first season they’ve played together after seeing their ability to be on the same page on set pieces.

“Her corner kicks are just amazing,” Forbes said. “There’s no way to describe them besides amazing. They go exactly where you want them to. I knew if I made the right run and just if I watched the ball coming in, I should be able to hit it in with my head.”

Forbes position in central midfield means she had a hand in everything for the Panthers. Through 19 games into the District 1 final, Haven had allowed just 15 goals. It kept 11 clean sheets, and the ability of Forbes and Malek to meter the tempo of the game, keep the ball and release pressure is a big reason for that stinginess.

This year’s quest for states was informed by last fall’s disappointment: The Panthers entered the postseason as the top seed in District 1 Class 3A but were upset in the second round by No. 9 Villa Maria. The Hurricanes went to states; the Panthers’ states drought went to six seasons.

With greater power on the field, Forbes was determined not to let it reach seven. And in stopping the states hiatus at the forefront of that impressive junior class that will return next fall, the hopes are going to grow ever larger.

“It was just incredible,” she said. “Last year, we fell short a little bit in the second round and it was unexpected. But this year, I think that last year gave us motivation to give it all we’ve got and push through. And I think we gave everything to get to states, and it was really exciting. … I think that we’ll be fired up more than ever and know that since we saw what it’s like to play in states.”