All-Delco Girls Soccer: Leyden made all the stops as Agnes Irwin soared in Inter-Ac 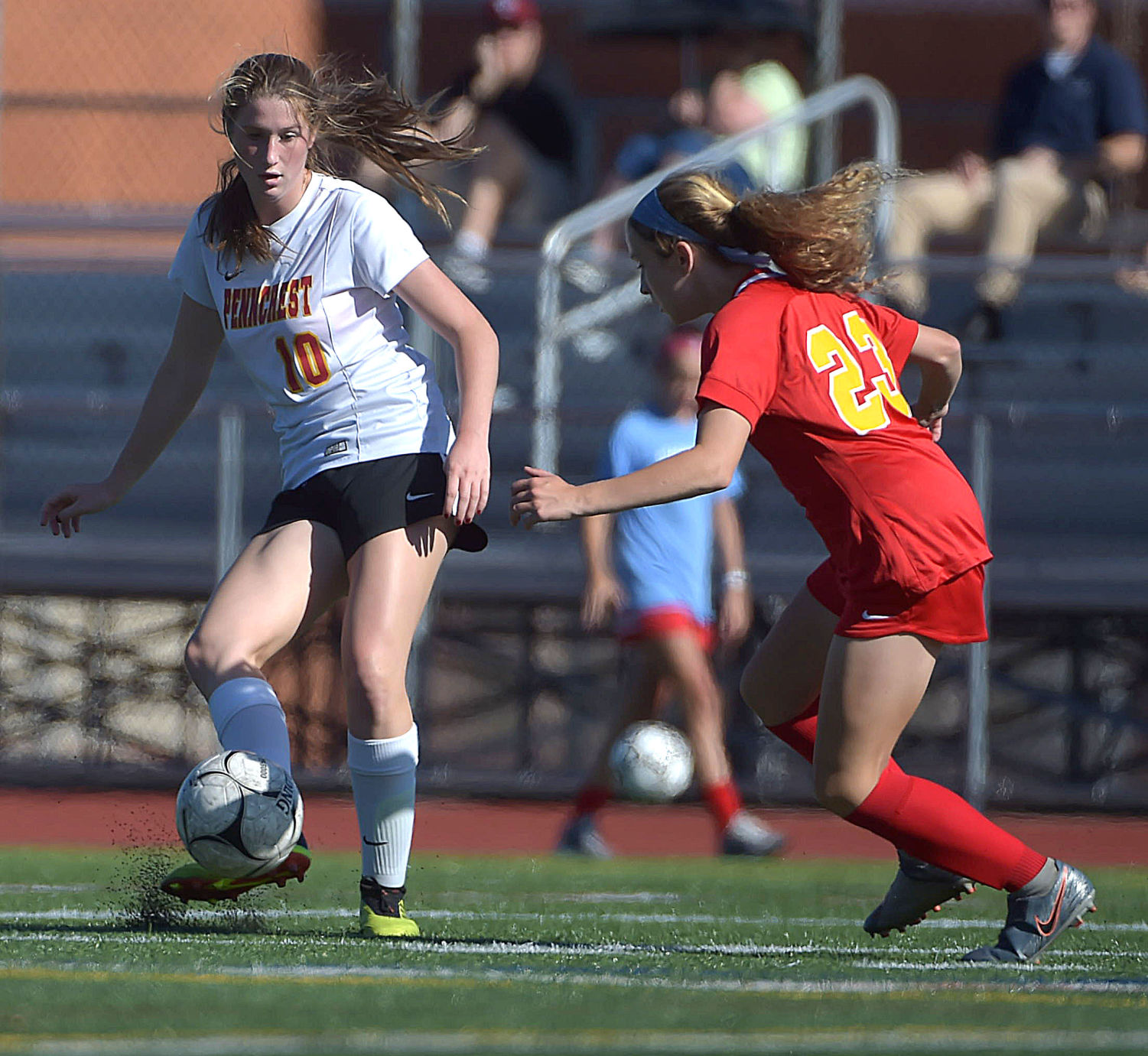 Penncrest's Shayna Polsky, left, dribbling against Haverford in this photo, supplied the Lions with a dozen goals this season. (Pete Bannan/MediaNews Group)

In addition to player of the year Maggie Forbes of Strath Haven, the rest of the All-Delco team includes:

Amelia Leyden, Agnes Irwin: The four-year starter authored a stellar senior campaign, pacing the Owls to 10 victories. Leyden helped Agnes Irwin post nine shutouts, including four in the high-octane Inter-Ac. In seven of the Owls’ 12 league games, Leyden helped them allow one goal or fewer. She made 13 saves in a shutout victory over Radnor, 13 in a blanking of Germantown Academy and, as the capstone on her career, 12 in a 1-0 win over Episcopal Academy to close the season. Leyden was the All-Inter-Ac first team goalie. Brooke Snopkowski, Haverford: Though she missed a few games due to injury, the junior center back impressed opponents this fall. Stepping into the void left when both starters, including All-Delco Rebekah Cunningham, graduated from last year’s District 1 Class 4A quarterfinalist squad, Snopkowski made herself an irreplaceable piece. The Fords struggled to an eight-win season mainly because of a lack of offense (just 15 goals in 18 games). But with Snopkowski’s help they kept six clean sheets, and five of their eight wins were by 1-0 margins. That stinginess made Snopkowski a clear choice as the Fords’ MVP and an All-Central selection.

Alissa Kinney, Springfield: The senior defender helped the Cougars make the District 1 playoffs for the first time in 11 years and get an opening-round win over Interboro. Kinney teamed with goalie Shannon Cutcliff to help Springfield keep eight clean sheets and allow just 1.15 goals per game (23 goals in 20 games) in a 12-win season. Those results included a 0-0 draw with Strath Haven in the regular season and a 2-1 win over Cardinal O’Hara, two teams that made the state tournament. Kinney was one of the top vote-getters in All-Central balloting to land on the first team. She joins 2014 honoree Taylor Cutcliff as the only two Springfield girls soccer All-Delcos in the last 20 years.

Laila Payton, Episcopal Academy: Not much got past the senior defender, a four-year starter who lands on the All-Delco team for the second time. Payton covers so much ground in central defense, the Old Dominion commit helped pace Episcopal to an 11-win season. The Churchwomen gave up just 21 goals in 19 games and kept nine clean sheets, with Payton as the defensive leader. That included a string of six straight shutouts in October, starting with a 1-0 win over Agnes Irwin and including four victories in the Inter-Ac League. The All-Inter-Ac first teamer scored one goal, in a win over Notre Dame. Dahlia Kuzemka, Strath Haven: In her first varsity season after a knee injury, the sophomore not only stepped into a huge defensive role but proved to be one of the best dead-ball specialists around. Kuzemka accounted for five goals and 15 assists, most off set pieces. On the back end, she could play as an outside back or in the center of a three-man backline. The Panthers allowed 24 goals in 21 games; before two lopsided playoff results, that number had been 15 in 19, including a stretch of one total goal conceded in nine games to end the regular season and start districts. Haven kept 11 clean sheets. Kuzemka had a knack for clutch attack contributions, scoring twice in the District 1 Class 3A quarterfinals and setting up both of Forbes’ goals in the semis to get Haven into states for the first time in seven years. Kuzemka converted a penalty in the states loss to Archbishop Ryan.

Shayna Polsky, Penncrest: The junior was Penncrest’s most versatile piece on a young squad. When the Lions needed a goal, Polsky shifted up into central midfield. When they needed to protect a lead, Polsky fell into a backline that started two freshmen most of the year. She produced plenty of offense for a nine-win team that finished 19th in the District 1 Class 4A rankings, supplying 12 goals and 10 assists. She had a goal and two helpers in a win over Marple Newtown, scored twice against Interboro and had the game-tying goal in league draws with Radnor and Ridley.

Julia Mullaney, Penncrest: If left to her own devices in midfield, the Penncrest senior would be content to patrol near the backline, break up passes and get stuck into tackles. But Mullaney proved she can do much more than just the defensive work, finishing third on the team with six goals to go with five assists in helping the Lions qualify for the District 1 Class 4A tournament. Three of her goals were game-winners, including in 1-0 nonleague victories over West Chester East and Lower Moreland. She opened the scoring in a league win over Garnet Valley and set up the winner against Haverford. Lauren Cunningham, Episcopal Academy: The senior midfielder wrapped up an outstanding career before heading to Lafayette. Cunningham was the Churchwomen’s MVP in 2019, scoring 12 goals and 10 assists in leading EA to 11 wins. In a midfield deprived of 2018 All-Delco Raina Kuzemka due to a knee injury, Cunningham shouldered an even larger burden and flourished under the pressure. She was a constant, scoring four game-winning goals and helping freshman Maya Naimoli add 12 goals this season. The first-team All-Inter-Ac pick had two goals and three assists in two wins over Notre Dame and scored the winner in 1-0 decisions over Radnor and Agnes Irwin.

Carlie Shiller, Garnet Valley: The junior was the Jaguars’ leading scorer, helping them qualify for the District 1 Class 4A playoffs. The midfielder/forward was an All-Central pick in her third year as a starter, tallying nine goals and four assists. Three of the markers were game-winners, including a 2-0 contest with Harriton in which she both goals, a 1-0 decision over Methacton that proved vital to the Jaguars’ postseason fate and two goals in a 3-2 victory over Radnor, the winner with 11 minutes to play. Shiller also scored twice against Upper Darby.

Natalie Pansini, Agnes Irwin: The Princeton lacrosse commit proved she’s not bad at her other sport, either. Pansini led the Owls with 14 goals to go with seven assists, earning first-team All-Inter-Ac honors. She recorded a hat trick against Notre Dame, two goals and two assists in a win over George School, and two goals each in wins over Hill School and Radnor. Also an All-Delco in lacrosse last spring, Pansini capped her soccer career with the only goal of a 1-0 win over Episcopal on rivalry day.

Chiara Robinson, Sun Valley: The senior forward was the driving force behind many of the youthful Vanguards’ eight wins. She tallied a team-high 13 goals to go with two assists, a versatile player who could play in midfield or on the forward line as needed. She scored a hat trick to go with an assist in a win over Interboro to open the season. She added a hat trick in a loss to Downingtown West and two goals vs. Marple Newtown. Robinson had a knack for the clutch, scoring game-winning goals in a 1-0 win over Cardinal O’Hara, in a win over West Chester East and again with two minutes left as the Vanguards stunned Strath Haven in the regular season.