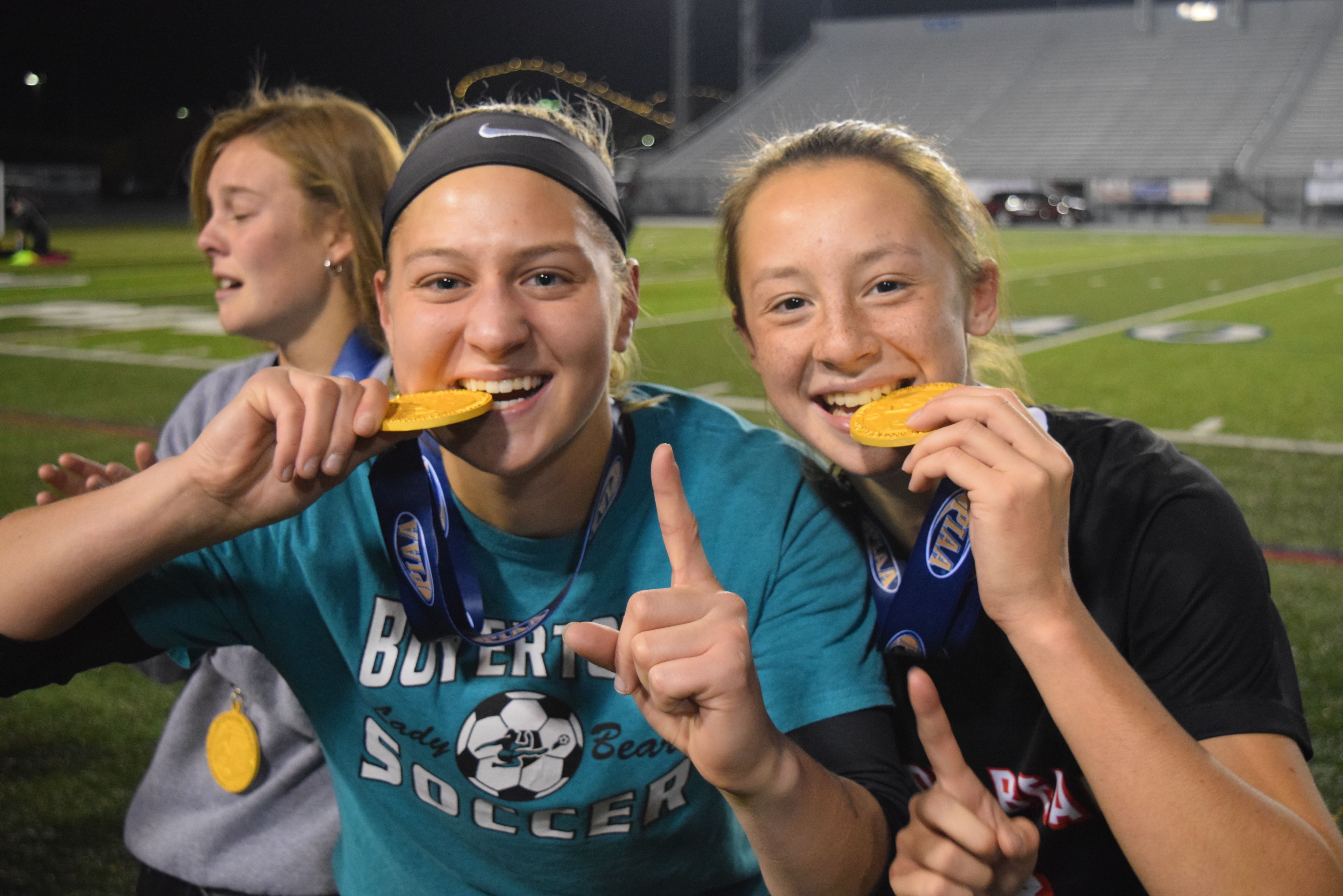 There’s a commonly held belief in sports about a team riding a “hot goalie” to a championship.

It’s most used in hockey, but isn’t exclusive to the ice.

Down the years it always seems like it’s “their” hot goalie, someone else’s team benefiting from an in-form shot stopper, a concept that only exists from afar. How many teams get to say “our hot goalie?”

The Boyertown girls’ soccer team, for one.

The Bears had no shortage of state championship-level performers in their run to Friday’s 1-0 double-overtime victory over Conestoga in Hershey: the back four of seniors Morgan Kline and Emma Elwell and juniors Courtney Actis and Mikayla Moyer (the title-winning goal scorer) rarely put a foot wrong in the tournament; midfielder Camilla Kuever, Boyertown’s impressive German exchange student, was everywhere in every game, an unstoppable ball-winner even while targeted in each game; and junior Samantha Goffice, who battled through two sprained ankles since the District 1 quarterfinals and scored four goals (two game-winners) in states.

But senior goalkeeper Madison Gallagher’s play throughout the Bears’ run was undeniable.

In the last 221:38 of Boyertown’s season, the ball never touched Gallagher’s net. Two hundred twenty-one minutes. That’s nearly four full games. And the bulk of those minutes were against two of the four best teams in the state this year (North Allegheny and Conestoga).

“We started the season and we set a goal and we started winning and winning and we realized this (a state title) could actually become a reality,” Gallagher said Friday after the final. “Our team knows how hard we worked, the extra practices and the communication skills, the adversity we faced. Every team has adversity, I mean, we had a striker (Elwell) on defense the whole year, little things like that that we overcame.”

Gallagher was All-Pioneer Athletic Conference second team as a junior and was not fulfilled with staying at that level. That was when the simmer started.

“Last year, I wasn’t satisfied for where I was,” Gallagher said. “I went and I worked out and I focused more on getting more physically fit and working on my mentality.

“Your mentality has to be right or nothing will go your way.”

Gallagher used a technique to let the bad moments go and tried to channel positive mentality to her teammates.

“When a goal is scored on me, I have an imaginary box. I step in the box, squeeze my fingers, and step out and it’s over with and the next play is on,” Gallagher said. “I try to send that to my teammates and I think it really worked this year. I think our mentality was one of the best I’ve ever seen.”

No doubt she stepped into the box after allowing a softer goal from long range in the first half against Nazareth in the first round. But from that point on Gallagher was faultless, only allowing two more goals, a deflected own goal against North Allegheny and an unsaveable bending blast by NA’s Sarah Schupanksy, both in the quarterfinals.

After that, the box turned out to be a no-show as Gallagher caught fire, recording 13 saves against North Allegheny, five in the semifinal shutout of District 3 champion Hempfield and 10 in the double-overtime blanking of Conestoga, with three that were no-doubt goals if the Bears had a lesser keeper.

It doesn’t hurt to be from a sports-centric family: along with mom Stacy and dad Pete – the Ursinus head football coach of 19 years – older sister Kaleigh just finished her sophomore season with the Loyola (Md.) women’s soccer team where she was All-Patriot League third team.

“She’s an extraordinary person,” Boyertown coach Bill Goddard said. “I thank her and our other girls most for their contributions on a human level to our program. As far as her play is concerned, we play a very high risk, high reward system and we’re able to play that because of her ability in the goal. When we make mistakes, she’s able to negate them.”

By the time a team reaches Hershey, everybody’s great. But not everyone’s ‘hot’ and Gallagher definitely was.

“We’re going to miss her,” Goddard said. “But she’s going off to the Naval Academy and is off to bigger and better things. She certainly was a very important piece to our success.”

Hidden beneath a taped-on No. 15 on the Boyertown soccer t-shirt she wore throughout the postseason read a quote from George Bernard Shaw: “Progress is impossible without change, and those who cannot change their minds cannot change anything.”

That’s a fact. While it wasn’t the only factor that came together for the Bears, it was a big one. When Gallagher changed her mind, the Boyertown girls soccer program progressed like never before.