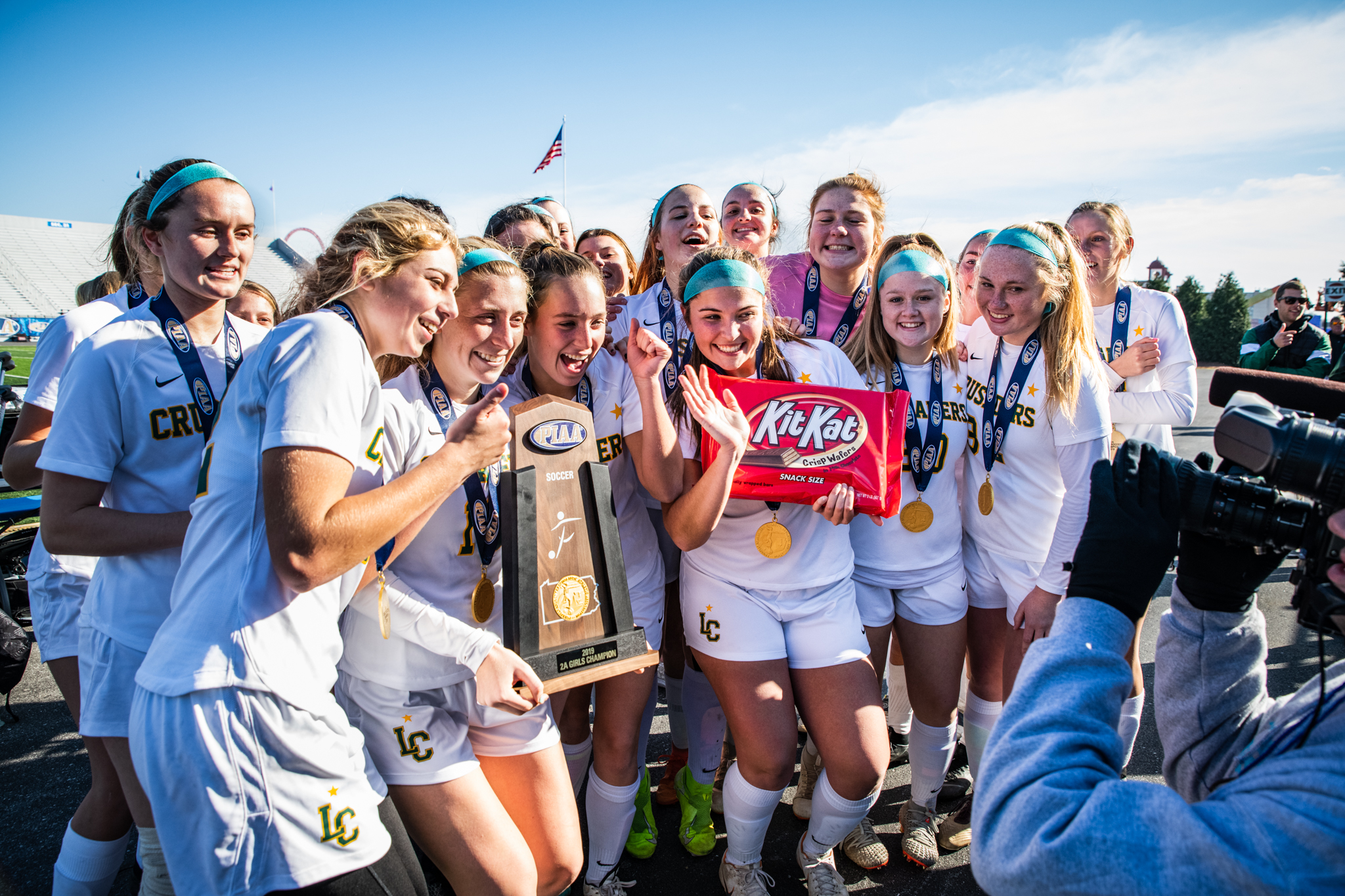 HERSHEY >> If Friday was the end of Kellie Gillen’s soccer career, she picked a memorable way to finish it.

The Lansdale Catholic senior scored seven minutes into the PIAA 2A girls soccer championship game against District 10’s Villa Maria, the only goal in the contest as the Crusaders finished off a dream month. For a team that’s been anything but typical, Friday’s match was anything but typical with LC getting a fast start and leaning on its defense to close it out.

With practically the entire school in the stands behind them, the Crusaders did just that, securing a 1-0 win to bring home the program’s first title and just the third team state title in LC history.

“We were trying to play for a little more time together and this is actually just insane,” Gillen said. “We’re so happy to bring this home to our school and our community.

“Prior to the game, we were all shaking and we had to remind each other it was just another soccer game. It was important on the field to know it was just a ball and a net, it’s just a game and if had gotten worked up, we wouldn’t have performed as well.”

LC’s state playoff run was defined by rallies and comeback efforts and they weren’t the quickest-starting group all season but there was something different about playing between the concrete stanchions at HersheyPark Stadium. Mostly, it was the crowd.

On the way to Hershey, the players saw an Instragam story of seven buses being loaded with fans back home and by the time the starters were introduced, a wall of LC faithful had assembled behind the team’s bench and didn’t stop making noise until well after the game was over.

“This crowd was phenomenal and put so much energy into us in the first 10 minutes, it almost hurt us because our players about ran themselves through a wall,” LC coach Bree Benedict said. “All that energy just fed Kellie, she loves it. She was made for this moment, I think.”

The goal came early and thanks to some stellar work by Gillen. A Villa Maria goal kick got to the 30, where an LC midfielder won it out of the air and played it up to Gillen.

With a defender draped on her back, Gillen trapped the ball, shielded the defender away and played herself into space. From there, it was only a matter of keeping it on target and her left-footed blast settled home neatly under the bar.

“The ball came out of the air and once I took a touch, I was one on one with the goalie,” Gillen said. “I just had to get my toe around it and blast the ball and it hit the back of the net.”

LC’s team play was outstanding on Friday. Gillen was a workhorse up top, but the midfield and defense were called on time and time again to handle Villa Maria’s pressure. The Victors controlled long spells of possession late in the second half and for nearly 30 minutes of the second half.

But Villa Maria couldn’t crack LC’s defense. It wasn’t anything flashy either, just players holding their ground, doing all they could to get the ball away from the Victors, kick it long and regroup to do it again.

“We had to defend with everything we had and make sure they didn’t have any shots on net,” senior defender Julia Boccella said. “It was a bit nerve-wracking but it was good we got the goal early because it only got harder to score as the game kept going.”

Boccella, who played with her right knee wrapped was, in a word, timely. She was there over and over to head away a ball, stick a foot in or hit one long and the story was the same for senior Danielle Mehlmann, Casey Sabolsky and Lauren Edwards throughout the second half.

Lansdale Catholic’s Kellie Gillen (10) shoots and scores what would be the lone goal of the game in the PIAA-2A final in Hershey on Friday, Nov. 15, 2019. (James Beaver/For MediaNews Group)

Villa Maria left a sizable gap between its backs and midfield early in the second half, but LC couldn’t exploit it because the Crusaders midfielders were all pinned back defending.

“I think everyone was in our 18 at one point,” senior midfielder Taylor Connelly said. “It was crazy.”

Connelly finished her LC career with a terrific effort and she was supported by classmate Lauren Delpo and a score of underclassmen including Nicole Mezzatesta, Megan Steinbach and Ava Mercier in the midfield.

Villa Maria’s Abby Godlewski put a scare into the Crusaders when her strike from distance struck the post with 18:12 left in the second half. Godlewski was the Victor’s most dangerous offensive player, but goalkeeper Brynne U’Selis was able to keep the clean sheet behind her hard-working defense with three saves.

“We’re so used to being in the second half and fighting for a goal, so it was important we not let them score on us,” Gillen said. “It was nice getting one in the very beginning, it let us feel a little more calm but we couldn’t give up because there was so much game left.”

Once it broke Villa Maria’s pressure, LC put on a master class in killing the clock during the final five minutes. As soon as the final horn sounded, the entire bench sprinted across the field to the huddle of players.

“It still doesn’t feel like it’s over,” Connelly said. “I feel like we’re supposed to go to practice on Monday and keep going.”

All that remained was claiming the spoils of victory. As she stepped forward to receive her championship medal, the entire LC section dropped an “M-V-P” chant on Gillen while Benedict draped the reward around her neck.

The Crusaders closed as they have all postseason with a team prayer then went home, a dream run capped off with a state title.

“As of right now, this is the last time I’ve ever going to play a competitive soccer game and my heart is just so full,” Gillen said. “I’m just so happy.”