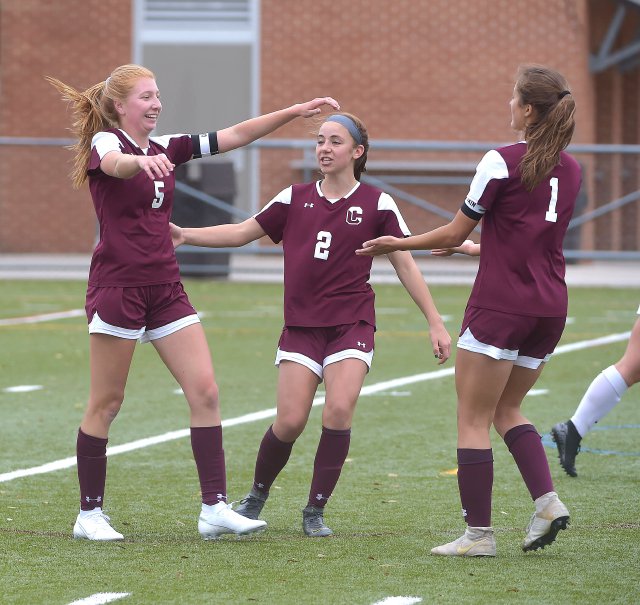 ROYERSFORD >> The hardest thing about playing Conestoga’s girls’ soccer team is the complete lack of margin for error.

The Pioneers put on a defensive clinic Saturday afternoon at Spring-Ford High School, not allowing a single shot on goal and scoring twice at the end of the first half to top District 11’s Freedom, 2-0, in a PIAA Class 4A quarterfinal.

The Pioneers picked up their 20th win in 23 outings this year (20-2-1) and advanced to Tuesday’s PIAA Class 4A semifinals against District 1 champion Pennridge, a quarterfinal winner over North Penn. The site and time should be announced Sunday.

Not only do the Pioneers boast a particularly stingy defense (only 16 goals allowed this season), they capitalize with great efficiency on the chances they create offensively.

Saturday it was senior Cali Courtney breaking a scoreless tie just before halftime, as her shot deflected past Freedom’s Megan Raffino at the 3:38 mark.

“I saw some open space, and I knew (Freedom) would be focused on Caitlin Donovan (the Pioneers’ leading scorer, with over 30 goals this season),” said Courtney. “I just shot the ball before they could react.”

Just three minutes later, Emily Burgess whisked down the left side, and had two options on a crossing pass. She chose the latter, senior McKenzie Coleman, who made no mistake in doubling the Stoga lead going into halftime.

It was smooth sailing from there for the Pioneers, who secured their 11th shutout victory of 2019 and second in a row to start the PIAA tournament.
Haley Gschrey, Freedom’s leading scorer with 36 goals on the year, was the focal point of ‘Stoga coach Ben Wilson’s game plan, which the Pioneers executed flawlessly.

“In scouting and researching Freedom, I knew she was a strong player,” said Wilson. “But in terms of formulating a game plan, I had a feeling our ‘sum of all parts’ would be superior, and the number-one priority in stopping a player who’s that good in space is being able to cut off her service.”

‘Stoga’s approach was effective to the point that Freedom moved Gschrey about the field through the second half, but to no avail. The Pioneers dominated possession, rarely allowing the ball into their defensive half in the final 30 minutes. Freedom’s foray into the box were even rarer, and when they did occur Jane Castleman and Reese Henderson led a defense that always seemed to have ample answers for each question Freedom posed.

“This is pretty much how most games are playing out for us,” said Wilson. “We control a lot of possession, generate chances – and once you get that first goal, more seem to follow. It’s not even a matter of how you get that first goal, it’s just once you’re on the scoreboard. Cali’s goal got us on the front foot, and made the goal that followed much easier.

Freedom’s campaign, stoked by a late charge from the No. 7 seed out of District 11, comes to an end at a mark of 18-7. Raffino, only a freshman, had nine stops for the Patriots.

The Pioneers are halfway through the state tournament without conceding a goal – is it feasible to ride their ornery defense all the way to Hershey and ultimately, a state championship?

“It’s totally realistic,” said Courtney. “We have strength on defense, we have stamina to play into overtime. We’re gaining more and more confidence as we move forward.”