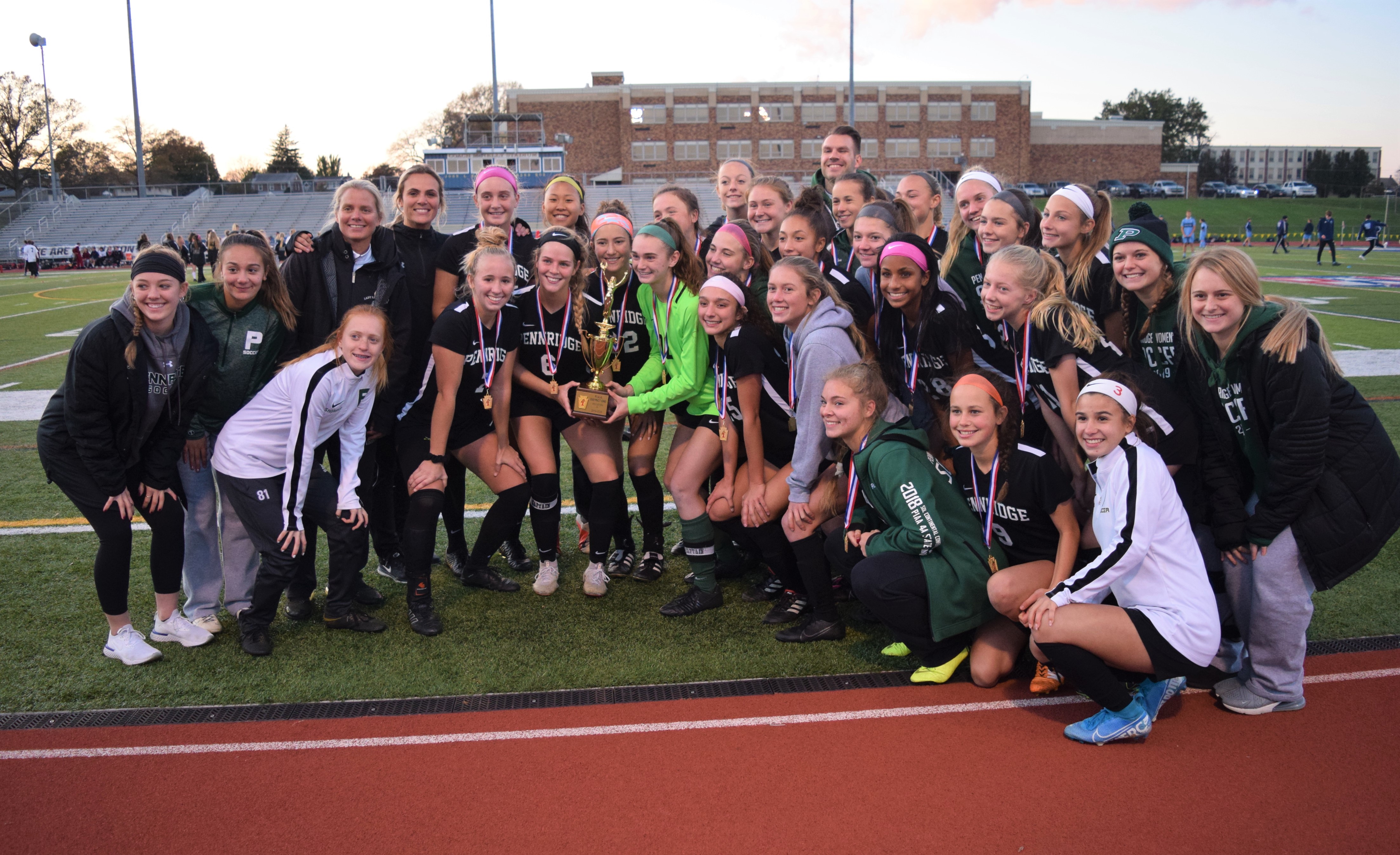 The Pennridge girls soccer team poses with the District 1 trophy after defeating Boyertown in the championship Saturday at Spring-Ford. (Austin Hertzog - MediaNews Group)

The Andersons noticed pretty quickly the Bears had a special player in their midfield in exchange student Camilla Kuever, a member of the German U16 national team. Maddie Anderson, who is heading to St. Joe’s next fall couldn’t help but wonder how a potential matchup between her and Kuever would go.

Anderson got that chance on Saturday, as she and Kuever waged an entertaining duel in the midfield as the No. 1 Rams and No. 2 Bears played off them in the District 1-4A title game.

Maddie Anderson more than held her own, Leah Malone converted a textbook counter into a goal and the Rams’ defense held late as Pennridge topped Boyertown, 1-0, to win the district championship in a terrific game at Spring-Ford.

“We knew they were going to be really good, they were here for a reason,” Maddie Anderson said. “We knew we couldn’t sit back. We watched film and knew it wasn’t going to be an easy game so I think we came in expecting to play our hardest.”

For about 15 minutes to start the match, it was all Bears. Boyertown kept the Rams pinned in their own end with senior keeper Meghan Kriney forced to fend off a shot from Karly Sheahan and a header from Kuever in the first 12 minutes of play.

Boyertown’s back line was also resolute, winning tackles and getting in front of Pennridge’s intentioned passes to help keep the Rams from connecting.

“It was definitely hard to get past their defenders but there were opportunities we knew we had to finish,” Malone said. “The one I scored, that’s one of them, but you have to fight through to put a foot on it.”

Watching, whether in person or on film, is different than the real deal and Maddie Anderson said she had to adjust what she was doing to try and win a couple balls off Kuever.

“I’ve never played against anyone with her height and her skill, she was just amazing,” Maddie Anderson said. “She won almost every 50/50 ball so it came down to reading what she does after winning the ball out of the air, if she flicks it or tries to connect a pass. In the first couple minutes, we knew what kind of player she was going to be.” Boyertown was also shorthanded on Saturday, with prolific junior forward Sam Goffice sidelined due to an injury picked up in the semifinal against Conestoga. Her absence certainly affected some of the things the Bears wanted to do, but the team’s underclassmen fill-ins still caused plenty of trouble for the Pennridge backs.

“At the end of the day, we really struggled finding a rhythm in the final third, and I’m sure a lot of that has to do with Pennridge. They’re a quality team,” Bears coach Bill Goddard said. “They’ve been here before, this is our first trip here, and I think our kids represented themselves and their school and community very well.”

Goddard felt Kuever handled the physical battle with Anderson and the rest of the Rams well and felt even with the extra attention, the junior was able to facilitate some really good chances.

“Camilla is a special attention and she draws a lot of extra attention from any team that we play,” Goddard said. “They had some good size and a couple girls that matched up with her pretty well, so she had her work cut out for her. Even though they were matching up and doubling her, Camilla still had a huge impact for us.”

From that scrimmage back in August to putting herself to the test on the field Saturday, Maddie Anderson came through and helped her squad win a district title.

“I’m extremely proud,” Audrey Anderson said. “It was exciting for her knowing she’d get the chance to play against (Kuever), and I’m proud as a coach and proud as a parent she was able to be a big presence against a player like that.” Boyertown’s Camilla Kuever wins a header against Pennridge during the District 1-4A final Saturday at Spring-Ford. (Austin Hertzog – MediaNews Group)

Pennridge made the most of a textbook counter late in the first half, getting four passes in sequence that led to Malone’s flick-in from close range. Anderson and Maddie Angelo combined to win the ball off a Bears throw-in, with Anderson pushing it out to Malone near midfield.

Malone played back to Lindsey DeHaven, who carried the ball up the spine, held possession through a tackle then found Grace Myers on the left wing. Myers got the ball right at the endline, whipping a cross through a tight window to find the trailing Malone at the near post with 5:33 left in the first half.

“Honestly, as I was pushing up the field,” Malone said. “I just felt like Grace was going to put a good cross in and I knew I had to be there so it was a matter of making sure I was in the right spot so I could put the ball in. You just have to anticipate the defenders are going to miss or it’s going to get to you anyway so you have prepare for it.

“In postseason, it’s a different gear and it’s a totally different game.”

The sequence fit the bill exactly to what Audrey Anderson asks her team to do when it has possession.

“We talk about being able to be in a scoring position with four passes and six seconds after gaining possession,” Audrey Anderson said. “I think it was fitting that we score on a counter with only four passes. I give Grace a ton of credit, she’s played a ton of roles and what we asked her today was to put balls inside the 18.”

Pennridge controlled play early in the second half, with Maddie Anderson battering the crossbar on a shot from deep but the Bears found a second wind. Like they did in the semifinal round, the Rams defensive group had to hold its ground against a wave of pressure to close the match.

Even losing right back Ashley Gordon to injury in the first half, the Rams’ back line of Zoe Sabol, Lauren McIntyre, Kara Dam and Angelo made some big interceptions and stops late in the game.

“This year as a whole back line, we’re just relentless and no one is getting by us,” said Angelo, clutching the district trophy. “That’s the mentality you have to have. Playing next to Lauren, who’s a senior that I’ve played with for three years now, I think we work really well together and communication-wise, we’re always talking, which helps us to be super-organized.” Pennridge’s Madison Angelo hugs one of her coaches after the Rams defeated Boyertown in the District 1 final Saturday. (Austin Hertzog – MediaNews Group)

Goddard felt his team played very well but was understandably upset with the result. With the Bears’ last loss coming way back in September, the longtime coach told his players it was simply time to start a new streak.

“If we’re going to lose a game, this would be the one,” Goddard said. “We’ll learn from it and move forward. This tournament is so hard and if you come out of here, you’re battle-tested and you’re as prepared for the state tournament as you could possibly be.”

Both teams move on to the state tournament. Goddard smiled when he was reminded the District I runner-up last year won the state title, while the Rams are emboldened to snap a recent first-round state playoff losing streak by the district champion.

“They said ‘we want to be the ones who break the curse,’” Audrey Anderson said.