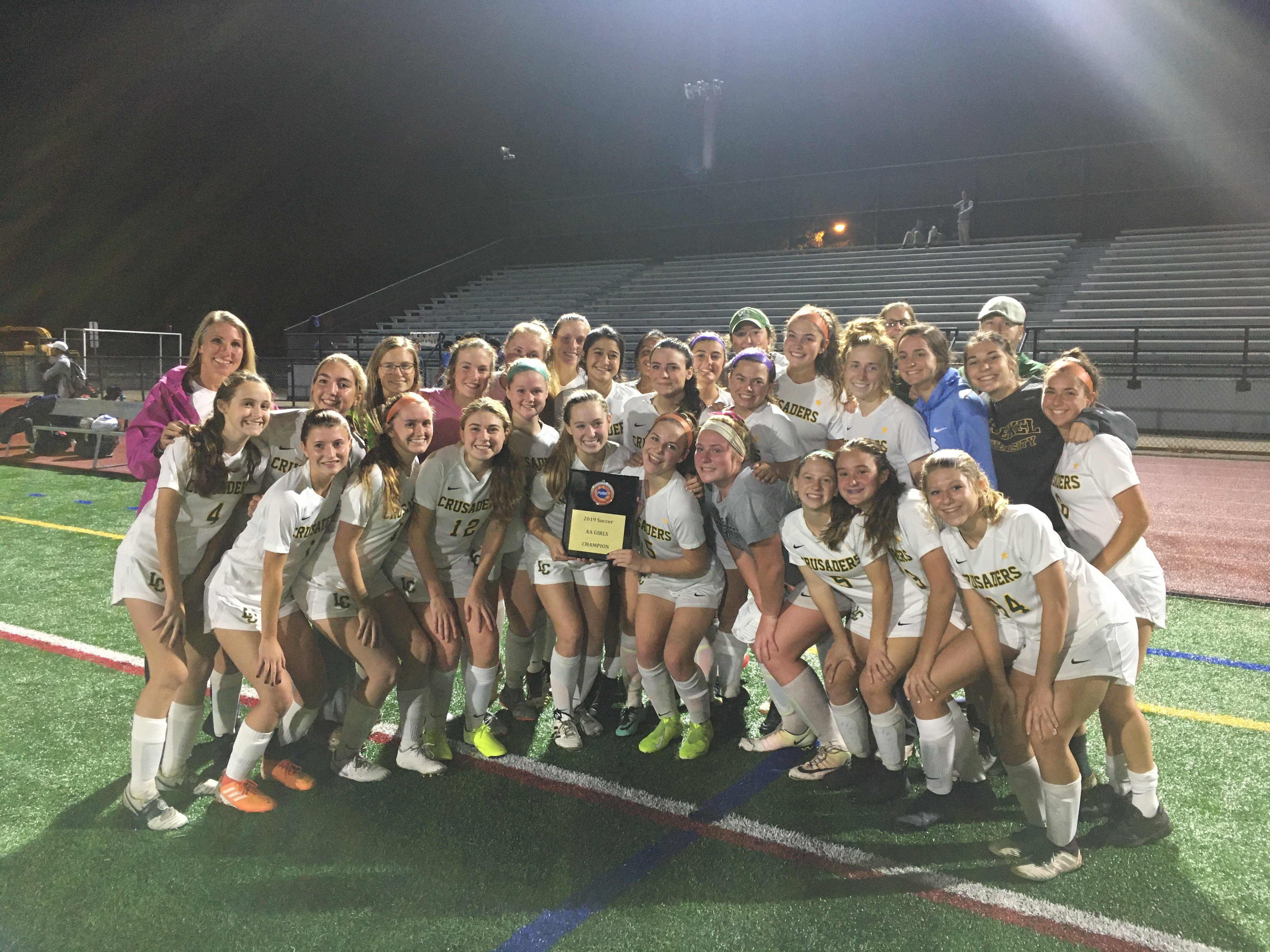 PHILADELPHIA >> Given nearly a week off between matches, most teams would be itching to get back on the field in a competitive game scenario.

For the Lansdale Catholic girls’ soccer team, the eagerness started with just getting back to practice after a coaching staff-mandated break following the PCL semifinals. Crusaders coach Bree Benedict has been part of or a coach of many teams, but she hasn’t had a group quite like this one.

Whether it be practice or a game day, it’s something that senior Kellie Gillen admitted has caused her to look out a classroom window wistfully at LC’s field and what drives senior Taylor Connelly to get through cross country runs so she can get to soccer.

As for the competitive side, the Crusaders did get back to work Wednesday night, topping Masterman 5-0 in the District 12-2A title game held at Northeast High School.

“We came out somewhat slow but once we picked it up, we got right back in our game rhythm, which was nice to see,” Connelly said. “A lot of people got a chance to play and we had some girls score who haven’t really had that chance this year.”

After losing to nemesis Archbishop Wood in the PCL semis, LC and its seniors turned to the upcoming state tournament that will serve as the last act of their season. The Crusaders had to win Wednesday to make it three straight PIAA tournament appearances in a row and wasted little time putting pressure on the Public League representative’s goal.

Benedict gave her team a few days off following the PCL semifinal game and coupled with a six-day total layoff between matches, the Crusaders were a little slow. Still, they have Gillen and the senior staked her team to a 1-0 lead three and a half minutes in.

While the striker was just happy to get back to practice earlier in the week, there’s a definite catharsis to putting shots on a goal not occupied by a teammate on the training field.

“Tonight we were just trying to give it everything we had knowing there was a little bit of pressure on us,” Gillen said. “This could have been our last game, but our main goal honestly was just to have fun with it and enjoy it. That’s why we’re here anyway and sometimes that gets lost so we wanted to pass the ball around, get shots and have fun.”

Despite LC’s dominance, the Crusaders seemed destined to have a 1-0 lead at the break until Connelly hit a true buzzer-beater for a 2-0 lead.

Emboldened by the goal, the Crusaders continued to pester Masterman’s goal as Gillen helped the offense keep going. The senior played a perfect through ball to Emily Simpson, who tucked away a composed finish for a 3-0 lead before Gillen worked through the box to make it 4-0.

Brielle U’Selis capped the scoring with a late chip shot that carried the right distance to go over the keeper’s hands and under the crossbar.

“The week off was good to reset our minds, the Catholic League can be grueling with how the playoffs go, so we took a couple days off and they came out with a really refreshed attitude,” Benedict said.

LC also used the match Wednesday to experiment a bit. Wingbacks Delaney Molettiere and Julia Boccella each got a spell playing outside midfielder, the squad rotated forwards alongside Gillen and tried a couple different looks on corner kicks.

For the team’s seniors, it’s the final act in their careers and Benedict is eager to see what they have in store starting on Tuesday.

CONNELLY AT THE BUZZER

Connelly only had eyes on the pass from Gillen coming her way.

“I could see it coming across and I didn’t look at the clock until I hit it,” Connelly said. “I was able to see the clock go from one second to zero. I knew I hit it before it went off, but I was still kind of nervous watching the refs and their hand motions afterward.”

With about 20 seconds left, Gillen had forced a save with the rebound pounding the post before rolling out for a throw. As time wound down, the forward rushed all the way across the field, controlled the throw in and played a ball back into space.

Connelly, who was totally unmarked, actually got a running start into her shot, putting a ton of power behind it. The senior midfielder’s hit crashed into the keeper’s hands and right through them, ricocheting into the goal at the halftime horn.

“I think that second goal was kind of key, we’d been looking for it the whole half and it felt like last year when it was 0-0 for so much of this same game, we couldn’t get a goal,” Benedict said. “Taylor scoring at the buzzer was kind of incredible, I’ve never seen a goal that closely timed. It was good for her being smart enough to take the shot knowing there wasn’t a whole lot of time left.”

Connelly came to the field Wednesday knowing she had a chance to add a second district title to her resume this fall. The senior, who is part of LC’s cross country team, won the District 12 2A title with a time of 20:50 which she called “a pretty big PR” for her and nearly a full minute ahead of the second place finisher.

The midfielder, who also runs track in the spring including the 800, 1600 and 3200 meter races, said balancing two sports isn’t all that difficult during the fall.

She’ll be at the state championship meet on Saturday, her second straight year qualifying, then it’s right back to soccer practice with her second family.

“We either run before or after school then manage recovery, so tonight, I just tried to play smart and got to rest in the second half,” Connelly said. “It was always in the back of my head coming into the season, you always have the team goals but when they line up with personal goals, it’s pretty cool.”

Connelly, who also plays club soccer, said she’s not sure if she’ll continue athletics in college but said she has talked to some schools with interest in running and soccer. At the moment, all she’s concerned with is making a run in the state tournament and extending the team’s time together.

LC made the second round of states last year, but the program has never advanced past that round. Last year’s seniors have been at games and still talk regularly with the girls still in the program after forging a tie that lasts much longer than four years.

It’s something the entire senior class has talked about and they’d love to leave that as part of a legacy that includes the program’s first PCL title.

“If you look at us off the field, we’re all best friends and it’s been that way from freshman year up,” Connelly said. “We’re just such a close group and going into this next step, we’re just looking to stay together.

“It’s such a good tradition to be a part of LC soccer, it’s something really special and they tell you that from when you start freshman year and tell you not to take it for granted. Now, being a senior, it’s just gone by so fast. Your time on the field may end, but being a part of the program never ends.”

With both of them graduated, the role of go-to scorer fell to Gillen and she just ran with it. A relentless worker at the top of the field, it was common to see the forward run herself into exhaustion by the end of a match, especially in PCL play.

It was the perfect example to set for the team’s younger attacking players and Gillen has enjoyed embracing the role.

“It feels good to know that they’re looking to me,” Gillen said. “I’ve been enjoying that.”

Gillen worked her way up, gaining a bigger role each season but always loved being a part of the program and putting in work every day each fall at LC. She laughed a bit when describing how she sometimes sneaks a look out at the team’s field and waits for the last bell so she and her teammates can get out there.

“You just have to be confident,” Gillen said. “I think that’s the most important thing. When it’s your time, you have to be a leader and be that reason why everyone else wants to be a part of LC soccer.

The senior said she’s leaning toward not playing in college but hasn’t closed the window totally yet. Like Connelly and the rest of her classmates, all Gillen is worried about is next Tuesday’s state opener and trying to make history.

For her, it’s not so much the prestige of getting further into the bracket, she just wants more time with her team.

“I feel like we’re ready to do something LC’s never done this year and we have so much motivation to do it,” Gillen said. “Every game could be our last, so we just want to prolong the season as much as we can.”

Gillen’s favorite part of Wednesday’s game was seeing everyone get in the match and work hard. LC soccer’s meant a lot to her and seeing every substitute go in and not slack off told her it’ll be in a good place when she and her classmates move on.

“We’re like a little family and it’s sad, in school after the season ends, we don’t get to all see each other as much,” Gillen said. “It’s nice having this time to spend as much time together as we can. For some people, going to practice is so dreadful but being at soccer is the best part of my day. We all joke about looking at the field and thinking ‘I can’t want to get out there,’ we really do love each other.”