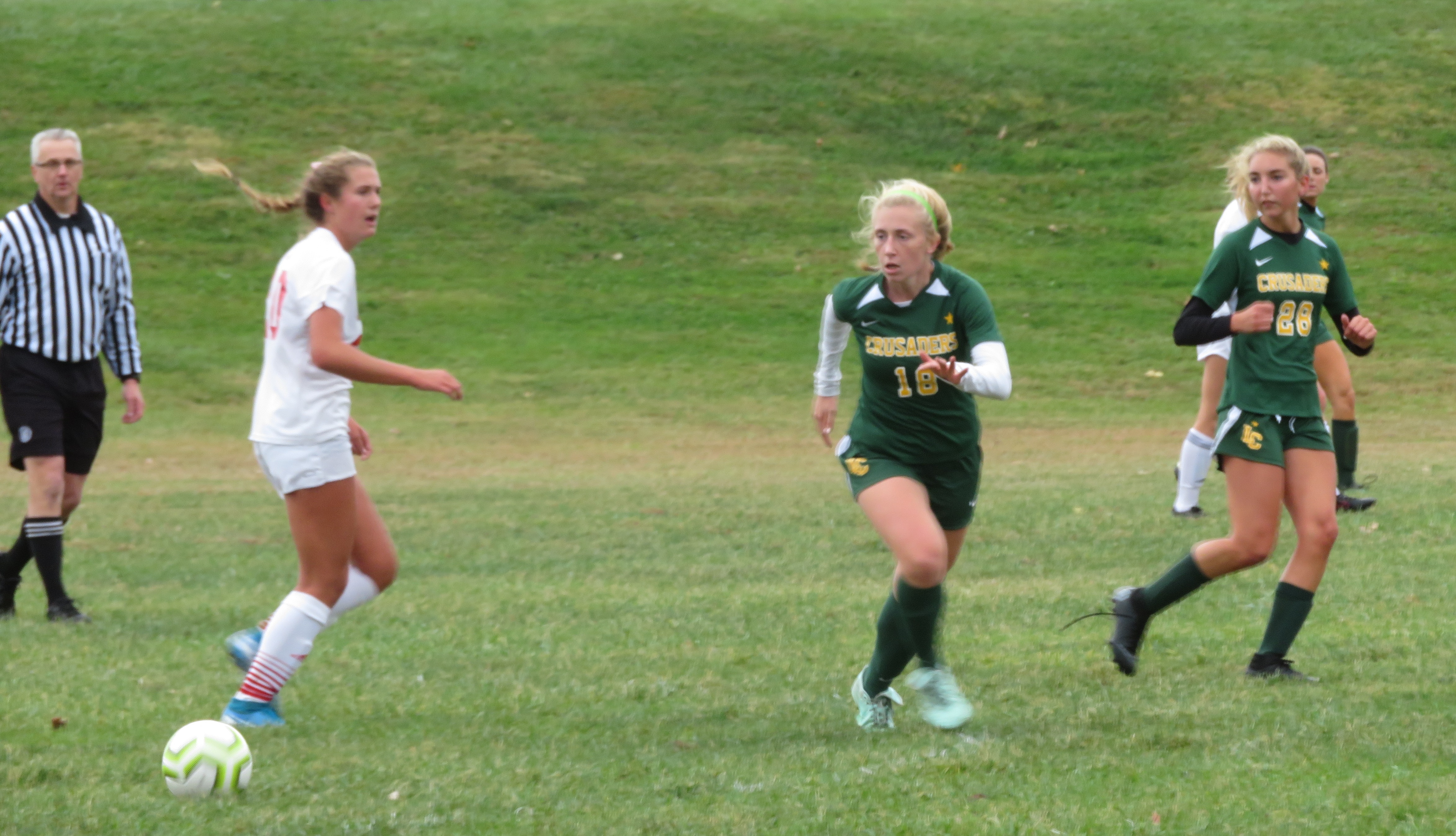 The Lansdale Catholic freshman saw the ball hovering over the goal line late in the second overtime Thursday afternoon but she also saw the gloved hands of Archbishop Carroll keeper Nikki Cashin closing in. Having seen Cashin take away too many chances already, Mercier put her foot through the ball and knocked it into the net.

Thanks to the freshman’s goal with 4:30 left, the No. 3 Crusaders edged the No. 6 Patriots 1-0 in their PCL quarterfinal matchup.

“Taylor (Connelly) took the corner kick and played it in, then Lauren Edwards had a nice touch into the goal,” Mercier said. “I thought the goalie was going to get it so I tapped it in. She was a good goalie, we kept going high and she always got to the ball so I kept it low.”

Back in September, the Crusaders topped Carroll in a tight match. Thursday was even closer as a combination of otherworldly bad luck and outstanding goalkeeping by Cashin allowed the Patriots to go toe-to-toe with the defending PCL champions.

Carroll didn’t create a ton inside 20 yards, but the Patriots put some quality chances on from distance and twice hit the crossbar. Earlier in the season, Carroll coach Tom Quintos said if his team lost in the playoffs, it wouldn’t be for a lack of effort and that was certainly the case on Thursday.

“I thought we were the better team on the day, we played really, really well, we played soccer and moved the ball,” Quintos said. “But the reality is they put the ball in the back of the net and they move on. They worked really hard to get that goal and kudos to them, they’re a good team.”

LC’s offense didn’t flow particularly well on Thursday but that didn’t slow down senior forward Kellie Gillen. The striker made run after run even well into overtime but couldn’t seem to get anything to go her way once she got inside the 18-yard box.

It hasn’t been pretty for the Crusaders offensively most of the season, but Gillen said it’s a testament to her team’s makeup that they kept finding ways to win them.

“We don’t give up,” Gillen said. “We’re big on these games and just getting one, so we have a lot of determination.”

Quintos said he watched a lot of LC in the last few weeks figuring the Crusaders were a likely quarterfinal opponent and Gillen’s play up top really stood out. The Patriots paid her plenty of attention, often double or triple-teaming the senior.

None of it slowed Gillen down and she just kept finding a way to get the ball and start going at people. Even if the foray ended in a horde of defenders or Cashin sweeping out to make a play on the ball, the forward wasn’t ready to have her season end in the last game she’d get on her home field.

“I don’t think too much of it, it’s kind of something you do in the moment,” Gillen said. “We’ve been in this situation so many times, you forget you’re tired and you push through. We weren’t going to let this be our last game.”

Gillen nearly scored in the second half if not for an unreal save by Cashin. The forward had gotten in behind Carroll’s back line and fired an early shot toward the goal.

Cashin, who had surged off her line, leapt into the air and snagged the ball just behind her head before crashing to the ground and holding on. The junior has been excellent all season for Carroll and her efforts on that play drew praise from just about everyone.

“She’s the best keeper in the league right now, I really believe that,” Quintos said. “She’s a phenomenal athlete, she’s smart and she’s tough to beat. It takes a lot to get one past her.”

“That ball Kellie chipped early in the second half was the best save I’ve seen in high school soccer in a very long time,” LC coach Bree Benedict, a former keeper, said. “She went full extension and held onto it so all credit to her, she’s a fantastic goalkeeper.”

Carroll closed regulation strong and controlled the majority of the first overtime, which was extended to 15 minutes due to it being a postseason match. Gillen had a couple chances in the second overtime but her bad luck continued.

Finally, with time winding low, the Crusaders got a coveted set piece thanks to freshman Meg Steinbach. The small but shifty forward carried the ball past a couple players before winning her team the corner kick that would solve the scoring problem.

“That’s Meg, she’s dribbler, she likes to cut people, get around and create a goal-scoring opportunity,” Benedict said. “We knew at that point our legs were so tired it was going to take some kind of spark off the bench and it just looked like there were enough gaps someone who can dribble could take advantage and I’m just so proud of her.”

Mercier admitted to being nervous both at the beginning of the season and prior to Thursday’s game and credited the team’s seniors for bringing her into the team. With the boys’ soccer team lining the sideline, along with a good number of football players, Mercier delivered a big moment for those seniors and then found herself in the middle as all of them swarmed around her.

“I haven’t been a part of anything like that personally,” Mercier said. “We’ve celebrated like that as a team, but today it felt extra special because they were chanting my name.

LC will face No. 2 Archbishop Wood, a 4-3 winner over Conwell-Egan, in the semifinals next Tuesday, but all the players were worried about Thursday was how they pulled out another win in a match where nothing seemed to be going right.

“That seems to be how we get all our goals,” Gillen said with a laugh.