Wissahickon gets crucial win in OT at Abington 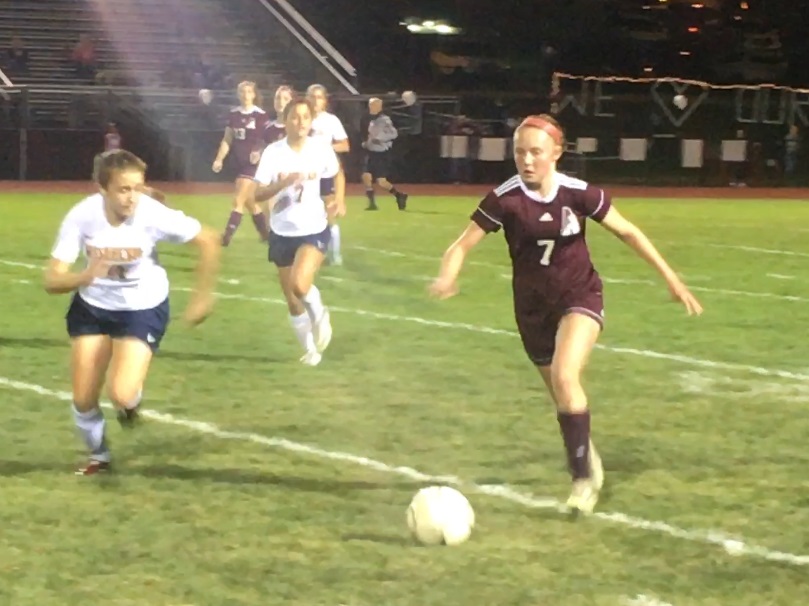 Winger Anna May started as a major threat but went quiet as her team went on the defensive for most of the second half. As overtime started against Abington, McDaniels told May it was time to be a threat again and to not hold back going at the goal.

It barely took 10 seconds before May did that, pouncing on a miscue in the back and volleying home the game-winner as Wiss edged Abington 4-3 on Thursday night.

“Right off the tap, we find Anna May who terrorized them early and kind of went dormant because we couldn’t get her the ball,” McDaniels said. “We knew off the tap we were going to go right to her and told her to go to goal.”

The Ghosts celebrated their Senior Night but any good feelings from the pregame ceremony were wiped out pretty quickly. Wissahickon, which came in just one spot ahead of Abington in the District 1-4A playoff standings, had plenty at stake and went at it.

Midfielder Alexis Hobson played a brilliant ball out of the midfield to spring Kylie Friedman down the right wing, leading to a cross and finish for senior Carly Amato just six minutes in. Wiss added a penalty kick goal from Amato four minutes later then went up 3-0 inside the first 14 minutes.

The team’s third goal was similar to the first, with a long ball out of the middle finding the flank. A mis-hit by a defender under pressure from Natalie Ryan allowed Ryan to take it in and cross to Friedman, who put away the goal.

“Senior Night, every coach will tell you they’re tough when you’re hosting because it’s really emotional,” McDaniels said. “We pounced on them that first 20 minutes and made them pay for maybe not quite having their heads in the game yet and to their credit, they rebounded and for the next 60 minutes, played really good soccer and took it to us.”

At that point, the Ghosts regulars had started to sub in and Abington began to take control of the game. A free kick from freshman Maura Day led to a corner with 23 minutes left in the opening half, starting the host side on long run of pressure to get back in the match.

Day, who played an excellent match partnering with junior Abby Bautista in the midfield, also started the sequence for the first Abington goal, sending a ball up to senior Grace Quinn who then left across the front of goal where a sliding Bautista tapped it in.

Aside from a couple Wiss corners and two shots by Amato, it would be all Abington until the break.

“They’re down 3-0 and come back and tie 3-3 with 10 minutes to go, I told them they have to be proud of that effort,” Abington coach Rick Tompkins said. “It’s a bad bounce at the end, but none of the first three goals are things that should happen. But, they’re kids and they’re not going to be perfect.

“Credit to Wiss too, they kept at it and they could have folded their tents when we tied it.”

With a little more than 11 minutes left, the Ghosts won a free kick, giving their freshman specialist another chance to shine. Day delivered a great ball into the box, where junior Casey Touey ran on and headed it home to slice the lead down to one.

The Trojans started the second half with a brief spell but the Ghosts soon returned to pushing the issue for a third goal. Abington had plenty of chances to get it too, but Wissahickon senior keeper Quinn Klessel kept denying them.

Klessel made 12 saves on the night as she was tested from just about every angle.

“For me personally, I’ve been working on watching the ball more and with our defense communication, I was able to see when it was time to get the ball and it was time for them to get it,” Klessel said. “That was working very well for us.”

As a freshman, Klessel was the backup keeper when the Trojans qualified for the District I playoffs and advanced to the second round. She hasn’t been back as the team missed out on the postseason the last two years.

All year, it’s been the motivation for Klessel and her fellow seniors to play beyond the last week of the regular season so picking up points on Thursday was crucial.

“We’ve lost three times in overtime this year and only won once, so it was heartbreaking each of those times so the girls clearly did not want that again,” Klessel said. “

Abington graduated Grace Quinn, it’s second leading scorer and three starting backs in Emily Quinn, Emily Friel and Riley Crabtree along with keeper Olivia Oliphant but has plenty of underclassmen returning. Touey is just a junior and could finish with 20 goals this season while Bautista and Day have been terrific in the middle of the park.

Bautista won a lot of balls in the middle while Day bombed numerous free kicks on goal and with 10 minutes, stepped up to the spot and buried the game-tying penalty kick.

“I’m glad they’ll both be back,” Tompkins said. “Our JV team is pretty good so the future is bright, but our reward for this heartbreaking loss is to play Pennridge.”

Tompkins noted there’s still a window for his team to make the playoffs, but losses this week to PW and Thursday against Wiss, have whittled that down.

Abington had a handful of chances to win in regulation but Klessel just wouldn’t let them.  The senior’s best stop came with about 15 minutes left off a corner kick when Quinn got loose for an open header.

Klessel put her body behind it, stopping the shot and stayed big enough to force a rebound off the post before Margo Kasenchar cleared it off the line.

“We can all stand behind that,” Klessel said. “When we have moments like that, it brings our confidence back up.”

Wiss hosts Radnor on Friday in another big game, then has two more to go next week as it tries to close in on a playoff spot.

“We haven’t made it the last two years so our seniors just want to get there,” Klessel said. “It’s a huge goal for us, we only got there once and we want to give the other girls their first chance to get there.”