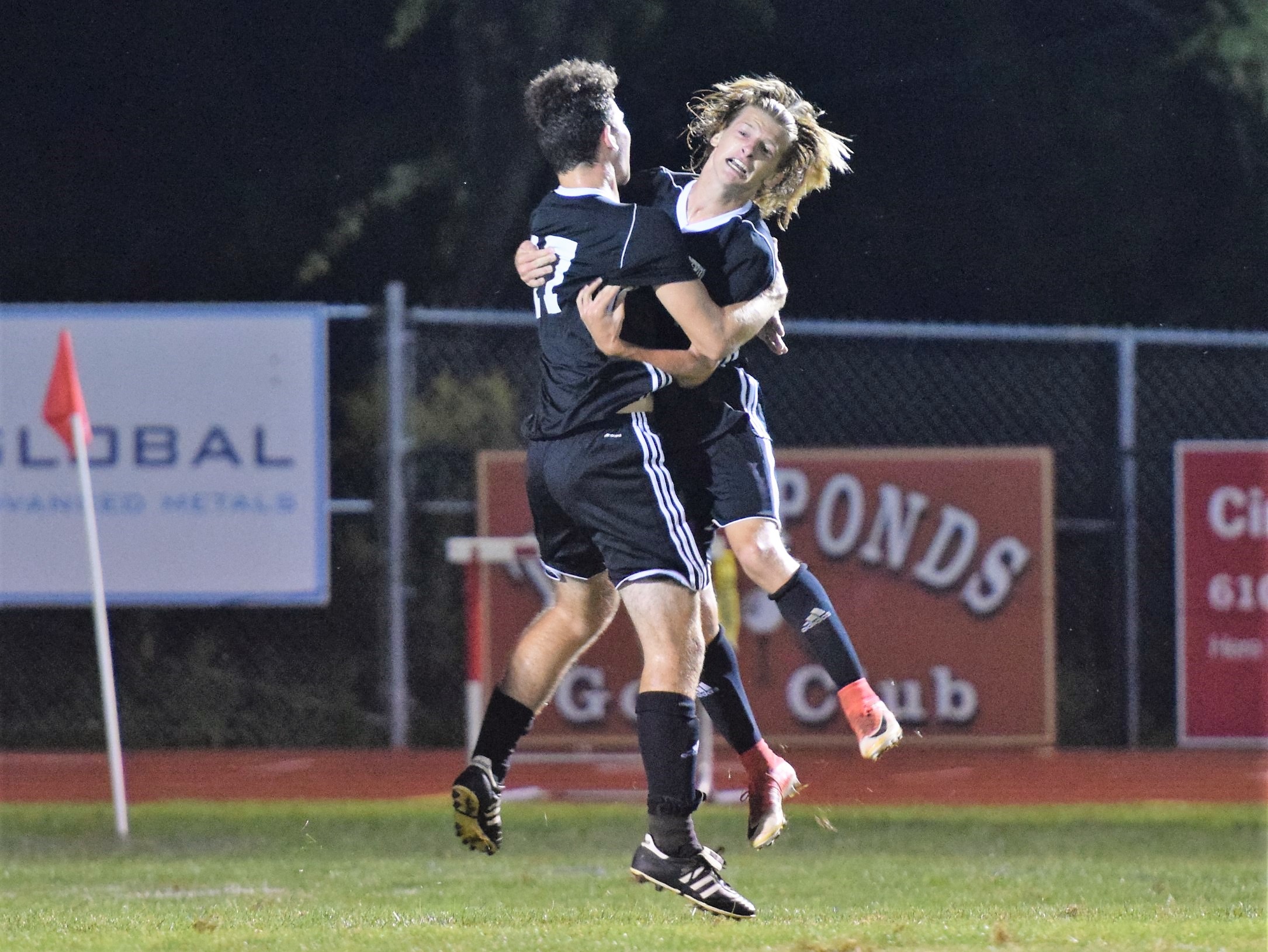 Boyertown 2, Norristown 0 >> Goals by Landon Wenger and Nick Willson fueled the Bears’ shutout of the Eagles Thursday, a win that clinched the PAC Liberty Division title for Boyertown (14-1-2).

Jacob Gross was credited with an assist for Boyertown, which will be the No. 1 seed for next Tuesday’s PAC semifinals, to be held at Owen J. Roberts.

Spring-Ford 3, Perkiomen Valley 1 >> With Brett Gulati figuring on two of their goals Thursday, the Rams handled the Vikings in their PAC Liberty Division game.

Gulati had a goal and assist for Spring-Ford, whose other tallies came from Colin Trainor and Marcel Francis. Tommy McPoyle had four goalkeeper saves, his effort marred by Alfredo Grimaldi’s goal for PV.

Upper Merion 5, Pope John Paul II 1 >> After the Golden Panthers pulled even with them Thursday, the Vikings went on a scoring tear in the final eight minutes to pull away in this PAC Frontier Division matchup.

Joey Mazzio scored for PJP at the 14:26 mark of the second half, equalling UM’s first-half tally. Dylan Russ gave the Panthers 10-save goaltending.

Perkiomen 1, Barrack Hebrew Academy 0 >> Zach Kratz scored the lone goal for the Panthers in their victory on Thursday.

Upper Perkiomen 8, Pottstown 2 >> The Indians capped their regular season Thursday with a PAC Frontier Division victory over the Trojans.
Down 1-0 on Aniya Hoskins’ early goal, UP rallied for five first-half goals, including a natural hat trick by Emily Schaut and a pair of goals from Avery Diehl. In the second half, Sarah Edwards also tallied a brace, with Bryanna Marinari chipping in a single goal. Kaleigh Martin added Pottstown’s second goal.

Giana Deskevich contributed seven saves in her first varsity start for the Tribe, which tied a school record for most regular season wins for a girls team (13). Emme Wolfel had seven saves, and Michelle Castillo two, for the Trojans.

Pottsgrove 1, Phoenixville 0 >> Skylar Glass scored her 16th goal of the season Thursday, lifting the Falcons over the Phantoms in PAC Frontier Division action.

Other Scores (no match report):

Shiller’s goal leads Garnet Valley to win over Radnor
Pennridge converts on corners, pulls away from Souderton in 2nd half