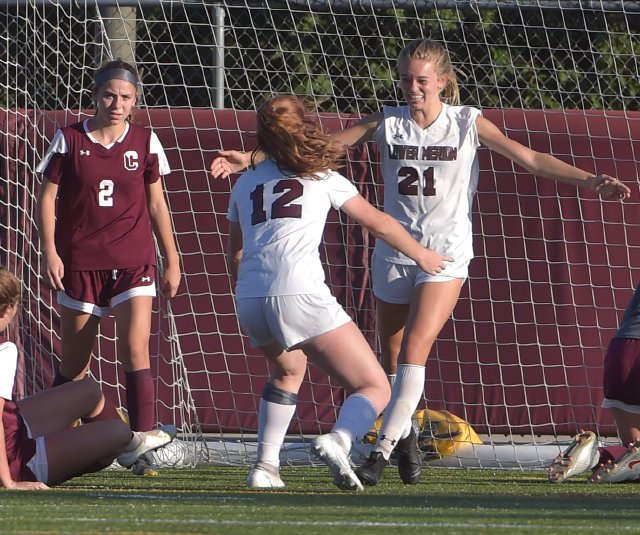 Tredyffrin >> Lower Merion displayed its mettle as one of the strongest teams in District 1 4A girls soccer Thursday at Teamer Field while handing host Conestoga a 3-1 defeat.

The Pioneers (13-0 entering the game) were ranked No. 8 nationally in the most recent USA Today Sports Super 25 Expert rankings and had outscored their first 13 opponents by a combined score of 61-7.

With the victory, Lower Merion (13-2 overall, 8-2 Central League) moved up to fourth in the PIAA District 1 4A rankings, just one spot behind No. 3 Conestoga.

The Pioneers got out to a 1-0 lead in the first 10 minutes Thursday, but the Aces caught Conestoga in the first half, and moved ahead for good in the second half.

Lower Merion head coach Kevin Ries said, “We had a plan and stuck to it; and over time, the plan was working better and better. The more we got adjusted to the speed of the game, the more comfortable we got.”

Lower Merion junior goalie and co-captain Audrey Brown said, “Coming into the game we kept a strong focus, we knew what we were going into [with Conestoga]. We started strong in the first half, and it wasn’t good enough, going into halftime with a 1-1 tie. So we knew we had to come out even harder in the second half, more organized.”

Conestoga got the early lead on a goal by junior center mid Sophia Koziol in the 10th minute and held that 1-0 advantage for the first 23 minutes, keeping the ball in Lower Merion territory for much of the first 20 minutes.

Brown kept the Aces within a goal of the hosts with four first-half saves; then in the 23rd minute of the first half, Lower Merion freshman Grace Downey’s goal tied the score at 1-1.

Conestoga head coach Ben Wilson said, “We knew Lower Merion was going to be a tough game, they’re a highly-ranked team, and they battled as hard last year. Lower Merion’s defense played a super game today; they cleared everything that came at them, their goalkeeper played really well and they played their system really well.”

“We looked really good early in possessions for the first 25 minutes or so. But once Lower Merion got their first goal, we kind of fell apart a little bit; we didn’t maintain possession and the ball bounced around a little too much and that kind of threw us off our rhythm.”

Midway through the second half, Lower Merion scored on a corner kick as LM sophomore fullback Roberta Moger, a left-footed kicker, put the ball into the box, into a crowded group that included a mixture of Aces and Pioneers, and the ball flew into the net for a 2-1 Aces lead.

Meanwhile, the high-scoring Pioneers continued to struggle in putting together another strong attack on goal.

Wilson said, “To Lower Merion’s credit, they never let us get our rhythm back. In our system, if we’re not composed in keeping the ball, and being active on the ball, making opportunities for ourselves, then we’re always going to struggle.”

Lower Merion held to one goal a prolific attack that includes All-American senior forward Caitlin Donovan, who has 23 goals; senior forward McKenzie Coleman, who transferred from New Mexico this year; and senior wing Calista Courtney, who was moved from outside back to wing this year. Both Coleman and Courtney have tallied more than a dozen goals each for the Pioneers this fall.

With 8:26 left, Lower Merion added to its 2-1 lead on a pinpoint corner kick from sophomore Roberta Moger to junior co-captain Maya Masotti.

Masotti smiled and said, “That was the most perfect drop-in by Roberta; it couldn’t have been better. She set it right in front of my head, and all I had to do was tap it right in to the net.”

With a two-goal lead, Lower Merion continued its momentum, keeping the host Pioneers scoreless for the rest of the game.

“After each goal, we stayed strong and we hustled back,” said Masotti. “We didn’t slow down, we got to every ball, we kept it in their half.”

Ries said, “Our midfield of Elly Slensky, Emma Burke and Ella Braunfeld played exceptionally. Also, our two center backs of Ellie Ward and Teresa Cato combined to blanket their potent offense. Every player had a role in this win.”

Lower Merion, who has outscored their 15 opponents by a combined total of 58-15, will wrap up its Central League campaign Oct. 15 at Haverford. Following a couple of non-league contests against Agnes Irwin (Oct. 17) and Mount St. Joseph (Oct. 19), the Aces will head to the District 1 4A playoffs.

Conestoga (9-1 in the Central League) will complete its league schedule at Springfield Oct. 15, then will host a couple of powerful non-league opponents, Downingtown East (Oct. 17) and Cumberland Valley (Oct. 18) to end the regular season.