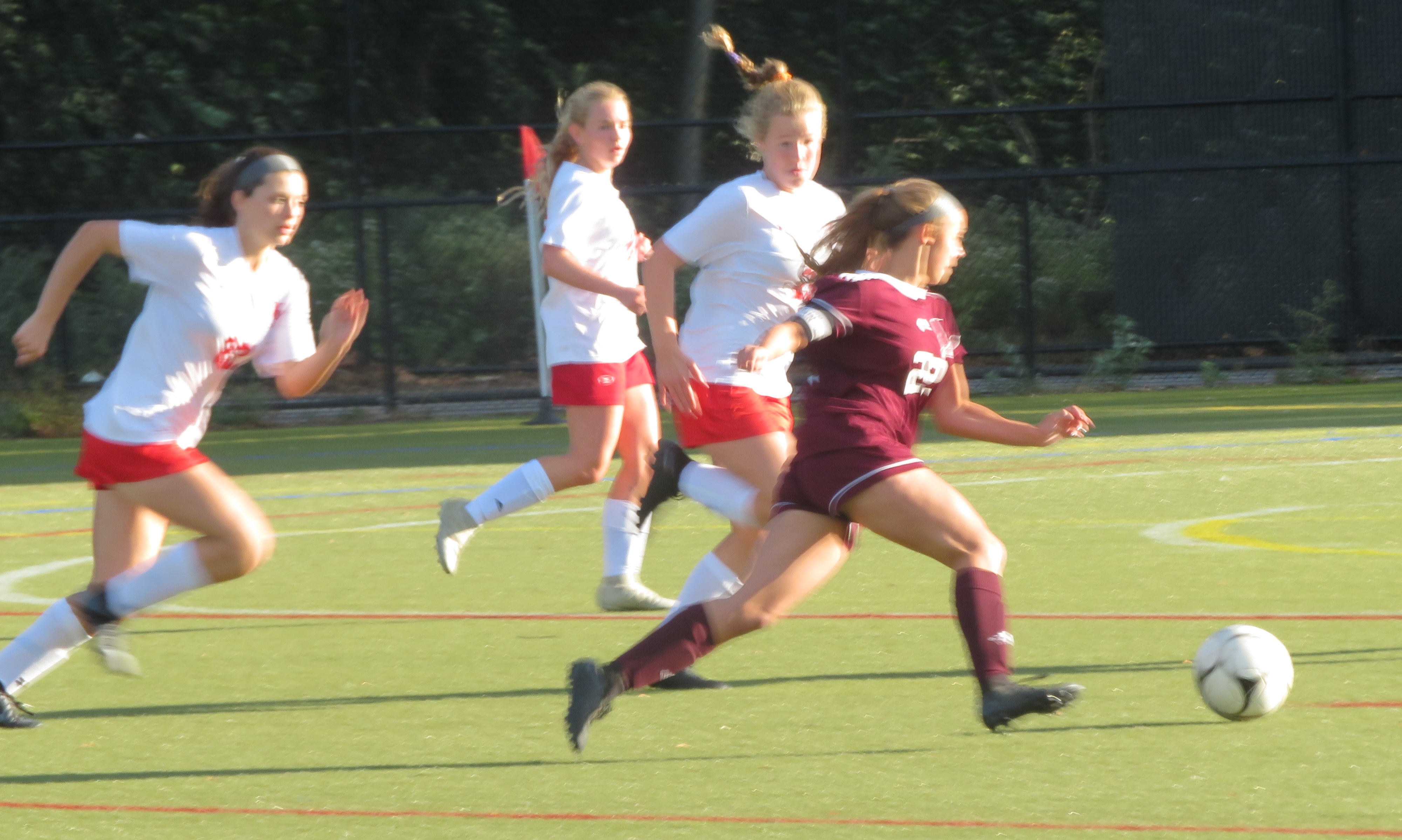 ABINGTON >> Casey Touey should just have the theme from “Jaws” playing behind her at all times.

Imagine the goal as the Amity Island beach and the soccer pitch in front of it as the shallow part of the ocean, then the Abington junior’s headband would be the shark fin prowling, waiting for the next chance to strike. Teams have tried everything from a straight man-mark to double or triple teams, but nobody’s really been able to reel in the catch so far this fall.

The Ghosts’ apex predator struck again Friday with her goal standing up as the winner in a hard-fought 1-0 win over Upper Dublin.

“She’s a shark,” Abington coach Rick Tompkins said. “It’s 13 games now and she has 16 goals. Everybody marks her and Grace (Quinn) has done a very nice job of complementing her.”

Abington simply wanted a better showing than their last outing with Upper Dublin, a 3-0 Cardinals win in mid-September.  Touey knew she’d be man-marked again, with Upper Dublin’s lightning-fast junior Anna Desch again drawing the task of playing the role of shark-hunter Quint in the Jaws analogy.

The real task however, would be on the back end for Abington and the Ghosts’ defensive unit responded with one of its best efforts of the year. While the back line has owned its share of ups and downs this season, the Ghosts made stands when they needed to and got some timely interventions with sophomore Caroline Hughes clearing two balls off the goal line.

“Early on we struggled with defense, we lost a lot of upper classmen from last year so we just needed to really bond together,” Hughes said. “We focus in practices on defense and communicating with each other. We changed the formation around a couple times, we finally found a good one where we play stopper-sweeper now and we’re just working together.”

Upper Dublin controlled the flow of play early and the Cardinals gave a terrific effort but they just couldn’t break through in the final third. The Cardinals’ defense was also strong in the first half with Abington’s lone chance coming when freshman Maura Day was able to spring Touey out of Desch’s mark for a shot that was well-saved by keeper Rachel Adelman.

Junior Kaitlyn Kenney was a defensive force for Upper Dublin and embodied the team’s overall effort, seemingly finding herself around the ball at key moments.

“She was awesome,” UD coach Chuck Gesing said. “She’s one who played a little with us last year and was injured at the start of the season but now she’s back and I hope this is a springboard to more minutes and I’m thrilled because she has a big foot, she knows what to do and is a physical player who can help us.”

The shark attacked early in the second half. Quinn, the team’s second leading scorer, played the role of facilitator, driving the ball down the right side and playing a perfect cross to the far post where Touey shook free just enough to punch it home with 37:38 to go.

“All credit to Touey,” Gesing said. “For two full games, we draped her with Anna Desch and she’s able to score a goal so all credit to her, that was a great play. Anna was still able to get forward to create for us, I don’t like using her in that capacity but when Touey is that glaring weapon, it’s what we had to do.”

Touey, who’s battled through all that defensive attention and still left opponents needing a bigger boat, has been adapting on the fly throughout each game depending what the defenders give her. Friday, she started out as the center forward but midway through the first half, noticed she wasn’t getting the ball.

“I moved to the outside knowing she would follow me, so that opened up space for the other players,” Touey said. “We try to spend as much time as we can in and out of soccer staying connected but it took a little while for our chemistry to build up. Once we started practicing and playing each other, we learned how each other moves and we’re really getting into a groove of playing with each other.”

Hughes came up for her team shortly after the goal, sweeping a parried shot off the goal line with 36:30 left to keep the Ghosts up. Making one goal-line sweep is contribution enough most days, but the fullback had another result-saving play later in the half.

Upper Dublin’s Mia Wright forced Olivia Oliphant into a save but again the ball was loose and Hughes swept in. The sophomore kicked it free of the line, her effort hitting another UD player and deflecting over the net for a six-yard kick to alleviate the pressure.

“Our mindset is ‘the ball doesn’t go in the back of the net,’ so whether it’s a free kick or corner, we just focus on that,” Hughes said. “Liv’s been playing amazing and I think we read each other really well so if one of us isn’t able to get there, one of the other backs will step in and help us out.”

Hughes added that the entire team has kept a positive attitude with each other, whether it was the backs as they struggled early or Touey as she worked to build the same rapport she had with Cam Lexow and Kailey Horton last season with Quinn, Day and freshman Lily Gray around her.

Gesing was disappointed for his players, saying he felt they played well enough to earn a result. The Cardinals aren’t out of the playoff picture just yet and Gesing said his goal now is to be the team nobody wants to play at the end of the season and a side where even the opponent’s best effort isn’t enough to guarantee a result.

Abington, the defending SOL American champion, kept itself in shark striking distance of conference leader Hatboro-Horsham with their second meeting set for Oct. 17. However, there are quite a few challenges in the way, starting with an away match at Plymouth Whitemarsh on Monday.

“It’ll help going into our games next week because again, we’re playing tough teams that we need to win, so I hope our spirit and morale stays up,” Touey said. “It gives us a little more incentive to win. Coming off an insane season last year, we felt like it was our duty to come back and win it again but I don’t know that we came in hard as we should have to start the season.

“Now that we see we can get into the playoffs and win (the conference) again, it only pushes us to want to win more.”