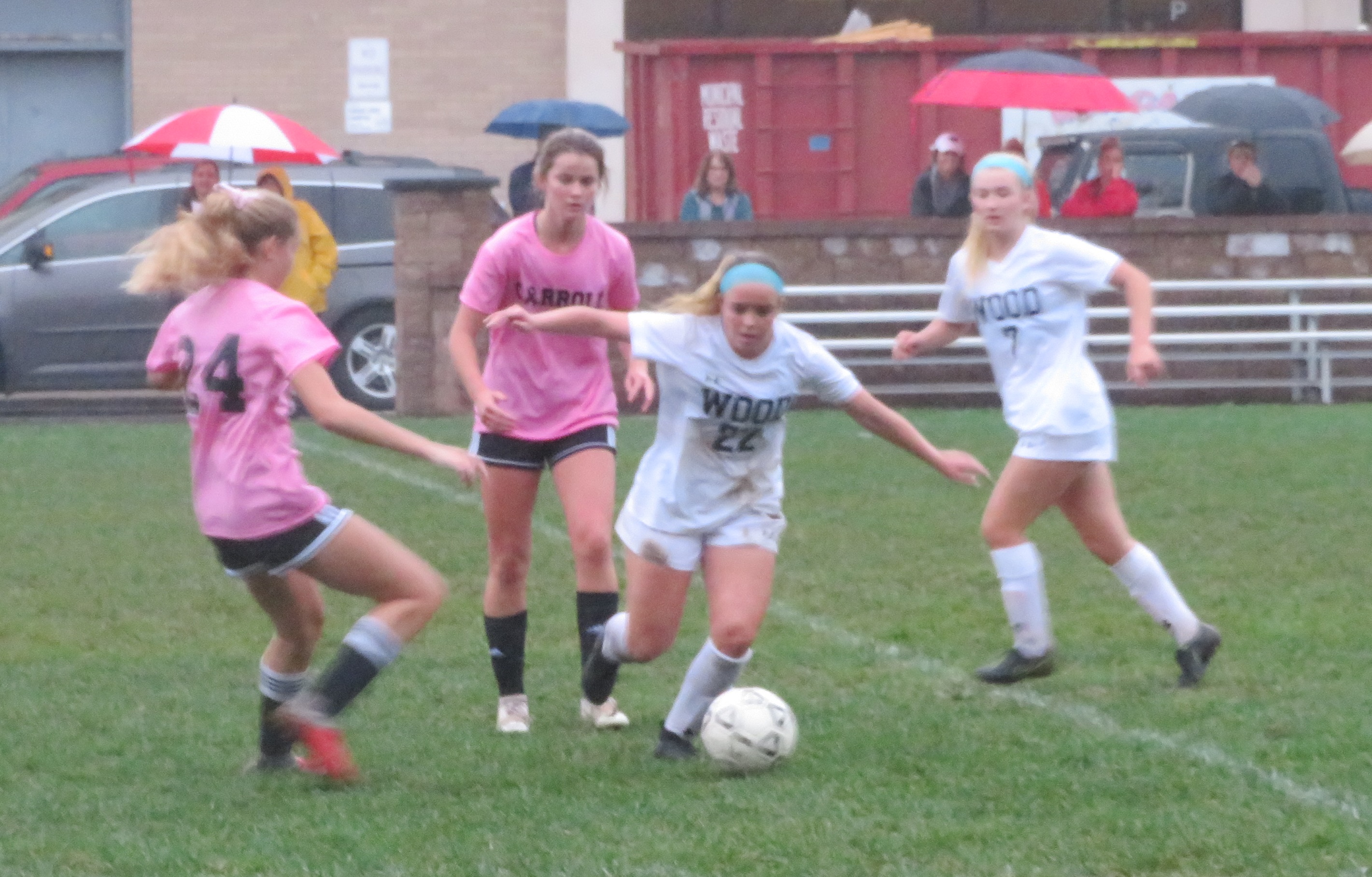 RADNOR >> Maggie Cliggett is a finisher.

The Archbishop Wood senior hasn’t had as many chances to show it this fall, moving out of her center forward spot to play a holding midfield role but the nose for goal never really goes away. On a wet Thursday afternoon at Archbishop Carroll and her team getting frustrated with their lack of finishes, Cliggett found the right spot and put one home.

Cliggett’s second half goal held up as the Vikings edged the Patriots 1-0 despite the best efforts of Carroll keeper Nikki Cashin.

“We had possession, we just need to keep working on finishing but I thought we played really well in finding each other’s feet,” Cliggett said. “We just need to work on the final ball through.”

Wood entered the day tied with Lansdale Catholic for second place in the PCL standings behind Archbishop Ryan and set to meet Monday afternoon at LC. That also meant Thursday’s match with the young, but much improved Patriots was a must-win and the Vikings came out ready to score.

Cashin also showed she was ready to do anything in her power to prevent that. The junior parried Wood’s first shot of the game off the crossbar for a save, the first of her 14 saves on the afternoon.

On a difficult day for a keeper, with the field and ball both drenched, Cashin didn’t give up any rebounds and covered the ball well when Wood put a shot on target.

“She’s unbelievable, she’s one of the best goalkeepers in the area,” Carroll coach Tom Quintos said. “She’s a rock and she’s been that for us the last two years.”

Wood’s front unit connected extremely well all day, which meant the Carroll defense was going to face shots and from a number of different angles. Center attacking mid Leighann Kafel put a couple swerving shots on target while forwards Paige Hoeger and Alyssa DeGeorge combined off each other to pepper the goal.

Each time, they were denied by Cashin, who also plays softball at Carroll. In the final five minutes, down a goal, Cashin switched jerseys and finished the game as a forward as the Patriots hunted an equalizer.

“I tell the girls every time we play, we have Nikki,” Quintos said. “They can play a little more loose and take more chances and be aggressive because you know you have somebody back there who plays that way.”

From backs to forwards, the Vikings have a mentality of pushing the ball but also keeping the ball. Sure, they play some long balls, but they are strongest when they connect passes and play to teammates’ feet like they did on Thursday.

Cliggett said the team’s bond is very strong so it’s easy for them to give the ball up because they’re either going to get it back or the next open player will have it come their way. The ability to play off each other was something Vikings coach Tom DeGeorge noticed early when he took over the program last year and tried to build on.

“Last year, we got better as it went on and the girls are really starting to link up, especially up top,” DeGeorge said. “We really stress trying to keep the ball, play good soccer, attack and then defend in their end.”

Playing as a center midfielder often means putting in a lot of work that doesn’t get noticed. DeGeorge has certainly noticed the way Cliggett has taken to the role, calling the senior a “workhorse” and crediting Cliggett for being willing to do the work required.

Cliggett, who did manage two shots on goal before her game-winner, is the right kind of player to branch the back line and the attacking front when Wood is playing its possession and ball-movement brand of soccer.

“Coach Tom always wants us to work on possession in practice and I think that’s what makes us stand out from the other teams in the PCL,” Cliggett said. “I think we were getting a little frustrated today, but we all knew we’d eventually finish.”

The Vikings drew a foul about 30 yards out on the left that freshman center back Daryn Savage served in to the top of the box. After the initial ball clanged off two players, it fell to Cliggett right on the 18-yard line where the senior quickly settled it and shot with her right foot.

It was a forward’s finish as the senior tucked it right inside the post with 12:26 to go.

“It was bouncing, so I just wanted to hit a one-timer and it found its way into the back of the net,” Cliggett said. “I kind of just shot it off the first touch.”

While Wood is battling for position at the top of the PCL ladder, Carroll is hoping to keep its improvement going into the postseason. The Patriots, who start 10 underclassmen, will figure somewhere into the PCL field and Quintos is hoping they can at least replicate the effort they’ve had against some of the league’s top teams this fall.

“I would love to show the growth this year and take another step in the playoffs,” Quintos said. “If we can do that, it would be great. If we don’t, I’d be disappointed but it won’t be for a lack of effort.”