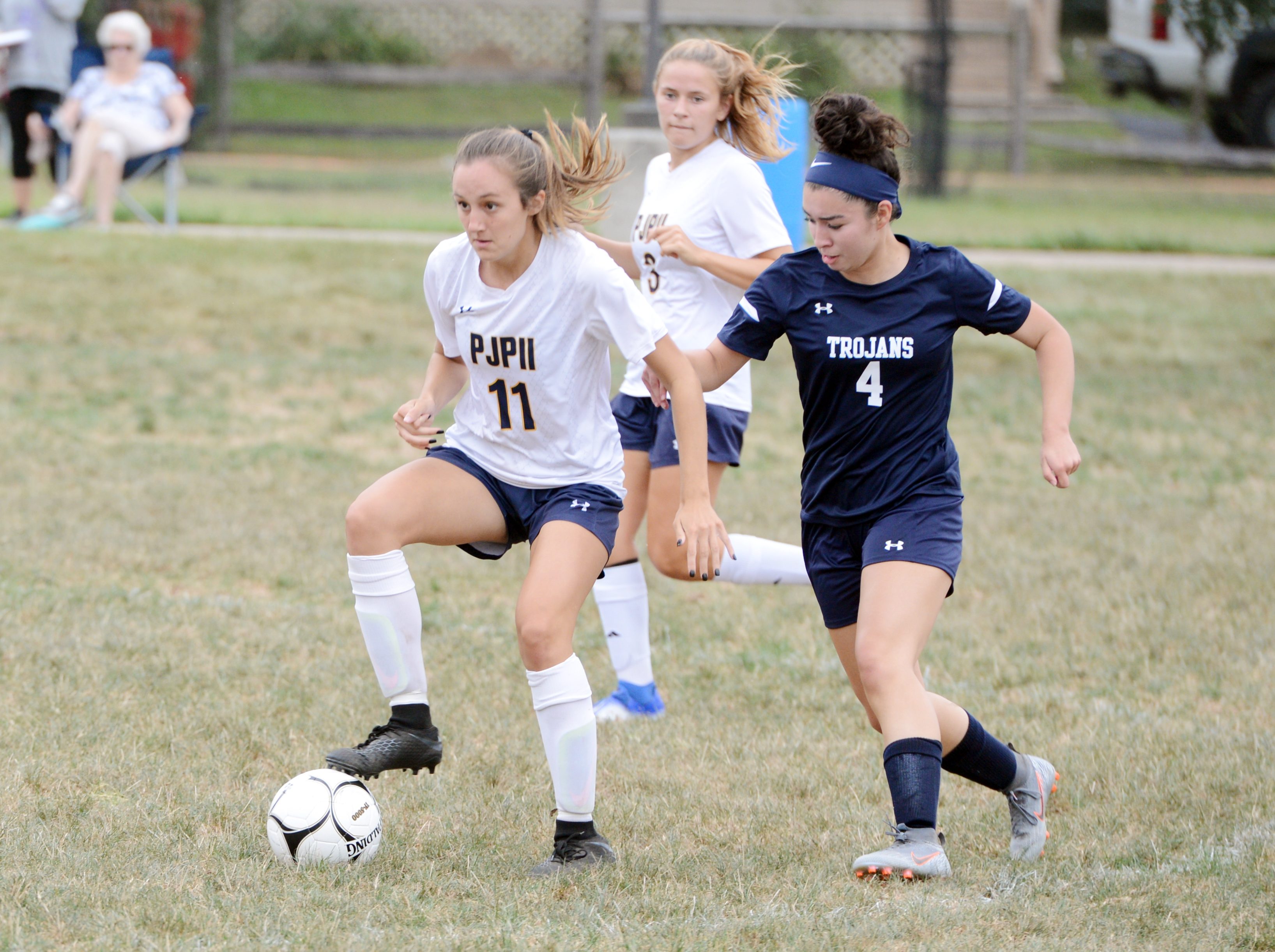 Putting goals in the back of the net has been hard to come by for the Pope John Paul II girls soccer team this season.

While the Golden Panthers’ defense has held opponents in check, PJP came into Monday’s game at Pottstown with just one goal in its last five games.

An early score by Lauryn Rezza and a late one by Delanie Didier gave PJP its second multi-goal game for a 2-0 victory over improved Pottstown, the Golden Panthers’ first Pioneer Athletic Conference Frontier Division win of the season.

“It’s big,” Rezza said of the win. “We were struggling a lot with winning. I feel like this is a big confidence booster win for us going into the rest of the season.”

Pope John Paul II’s defense has been its calling card this season, allowing an average of 1.25 goals per game and giving up two goals just twice through eight games. Senior defender Delaney Cordrey said communication has been key in the backline’s success.

The Golden Panthers’ inconsistency on the other side of the field has led to four one-goal losses, which is why an early goal Monday was a welcome sight.

Rezza got the offense going a few minutes before the midpoint of the first half off a PJP corner kick, heading the ball into the back of the net.

“It was a corner, so I just tried to make a near post run and I just got my head on it, and I scored,” Rezza said.

“I’m just trying to stay aggressive, stay pushing, try to keep my teammates up and just try to make as many runs as possible,” she added.

Pope John Paul II’s Lainey Owens put a shot off the post later in the first half. Pottstown’s best chance came when Calista Daye found Aniya Hopkins in front of the net on a breakaway. The shot was turned aside by PJP goalkeeper Stacy Kormos, who made five saves in the first half.

After heading into halftime with a 1-0 lead, Pope John Paul II turned on its offensive pressure in the second half.
PJP peppered Pottstown goalkeeper Emme Wolfel with 15 shots on goal in the game, including 11 in the second half.

Wolfel, a Kutztown commit, turned away shot after shot in the second half, trying to give Pottstown a chance to equalize.

The Golden Panthers finally got through in the final minutes of the game when Didier snuck a low ball past Wolfel’s fingertips to seal the win for PJP.

“She’s the best goalie in the league, hands down,” Pottstown coach Gary Mock said of Wolfel. “She does so much for this team that goes unnoticed, and it’s kind of unfair because she’s just that darn good.”

Pope John Paul II was a Final Four team in the league last season. While the results have not gone the Golden Panthers’ way early in 2019, PJP is not far from competing for a playoff spot once again.

PJP has 2-0 losses to reigning division champ Pottsgrove and Upper Perkiomen as well as a 1-0 loss to Phoenixville last Thursday. The Golden Panthers will face Upper Merion next Monday before going through the division slate once again.

“It’s not like we were losing by a lot,” Rezza said. “It’s close games every time. We gotta keep pushing, and I know we can do really well this season.”

Last year was a banner season for Pottstown, winning two Pioneer Athletic Conference games for the first time in program history. Mock said before the season he felt his team would be competitive in the Frontier division this year.

Pottstown dug itself a hole in the Frontier standings with a 6-3 loss to Pottsgrove and 2-1 defeat to Phoenixville to start league play before topping Upper Merion last Friday.

“If we get a little bit more physical and mark a little harder and tighter and don’t let those easy balls in, I think that will be the difference of turning the corner on these 1-0, 2-0 games,” Mock said.

“We’re still going to compete for a division title,” he added. “I’m not saying we’re going to win it, but we’re good enough to compete for it, and that’s still the goal. We’re right there in the division.”