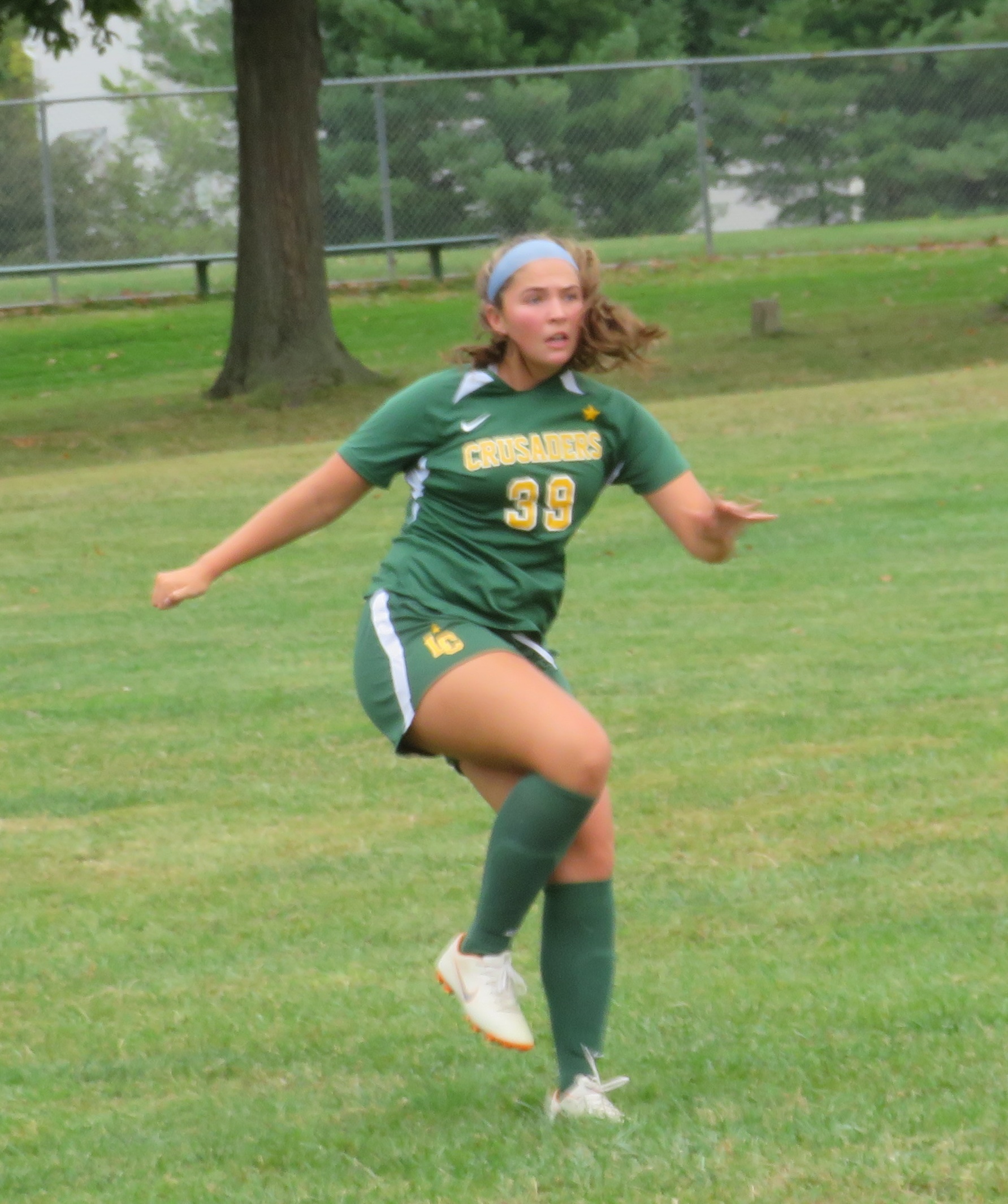 LANSDALE >> Danielle Mehlmann and the rest of the Lansdale Catholic girls soccer team defense don’t like to get beaten.

The Crusaders’ back line has held its own so far, but got a pretty important boost Monday with the return of center back Julia Boccella from injury. Even with a switch in keeper behind them, LC’s back three didn’t plan on getting beat with the crew back together.

Archbishop Carroll tested them, but LC’s defense was up to the task as the Crusaders notched a 2-0 win over the Patriots.

“I definitely think having (Julia) back from injury was really important and we could start to build our new formation,” Mehlmann said. “From now, we just have to work on getting used to three in the back and go from there.”

With Mehlmann at right back, Boccella in the middle and Delaney Molettiere on the left, the Crusaders put a determined wall in front of freshman Emily Simpson, who was called up from JV to make the emergency start. LC finished the afternoon with a large advantage in stats, but that doesn’t consider the fruits of a game’s worth of good movement and service by Carroll.

“She wanted to get the ball, she was excited for her first varsity game but we didn’t want her to be under pressure all game,” Mehlmann said. “Running through the ball and getting it out wide to our outside mids was part of the plan today.”

For much of the first half, the Crusaders were a bit off the mark going forward due to a lack of communication. That was not the case on the back end, where Simpson took command right away and directed her defenders to cut off threats and ensure all that work the Patriots were doing didn’t end in a shot on target.

“We were really excited that (Julia) came back and gave us an 80-minute game and Emily, who was playing in goal for the first time, did a great job coming off her line and scooping up some balls,” LC coach Bree Benedict said. “Danielle’s been so solid in the back, she blocks everything and if somebody is about to cross it, she throws her body at everything. She really gives her heart and soul back there.”

Kellie Gillen created an early chance for LC but she and her teammates would be frustrated by a mix of the woodwork, Carroll’s defenders and Patriots keeper Nicolette Cashin. Ava Mercier rang the cross bar late in the half while another shot by Gillen caught a mix of Cashin’s hands and the bar to stay out as the sides took to the half scoreless.

While Carroll didn’t get many chances on goal, the effort was there. The back line of Maria Organ, Mary Matey, Kayla DeMola and Bella Grube were able to slow down LC’s attack and won plenty of individual challenges.

“Our back line has been good all year long,” Carroll coach Tom Quintois said. “We’re going to continue to get better, that’s been our goal all year long. We have one senior, so it’s a young team but we’re a team I think is on the rise.”

Quintois credited LC senior midfielder Taylor Connelly as well as the Crusaders’ defense for creating an additional barrier in front of the back line but also creating some good chances forward. The team’s attackers like Keri Barnett, Reagan Duzy and Emma Talago battled but just couldn’t find that last connection in front of goal.

“We just didn’t do enough and they’re stingy defensively, they’re a good team with a lot of pedigree, won the Catholic League, well coached and their kids play hard,” Quintois said. “We’re playing a lot better this year. Last year, they won 2-1 but I felt like they dominated the game but today we played well at times, we were just a little inconsistent.”

Gillen scored two minutes into the second half when she pounced on a ball in the back, touched around a defender and buried it. Benedict said that was a big moment for her team and fit into LC’s approach to score first and try to shut down opposing teams from there.

Lauren Delpo doubled the lead later in the half and from there, the back line was able to lock down the clean sheet to improve to 3-0 in the PCL. With just three in the back, the LC defenders have more ground to cover and working together is vital. Luckily, that’s not an issue for the Crusaders’ top three on the back line.

“Communication is definitely key in our back line, but all of us are very vocal,” Mehlmann said. “Talking to our outside mids and telling them when to drop back is really important. We’re all definitely one to never get beat.

“Getting beat is a sign of weakness and we aren’t weak.”