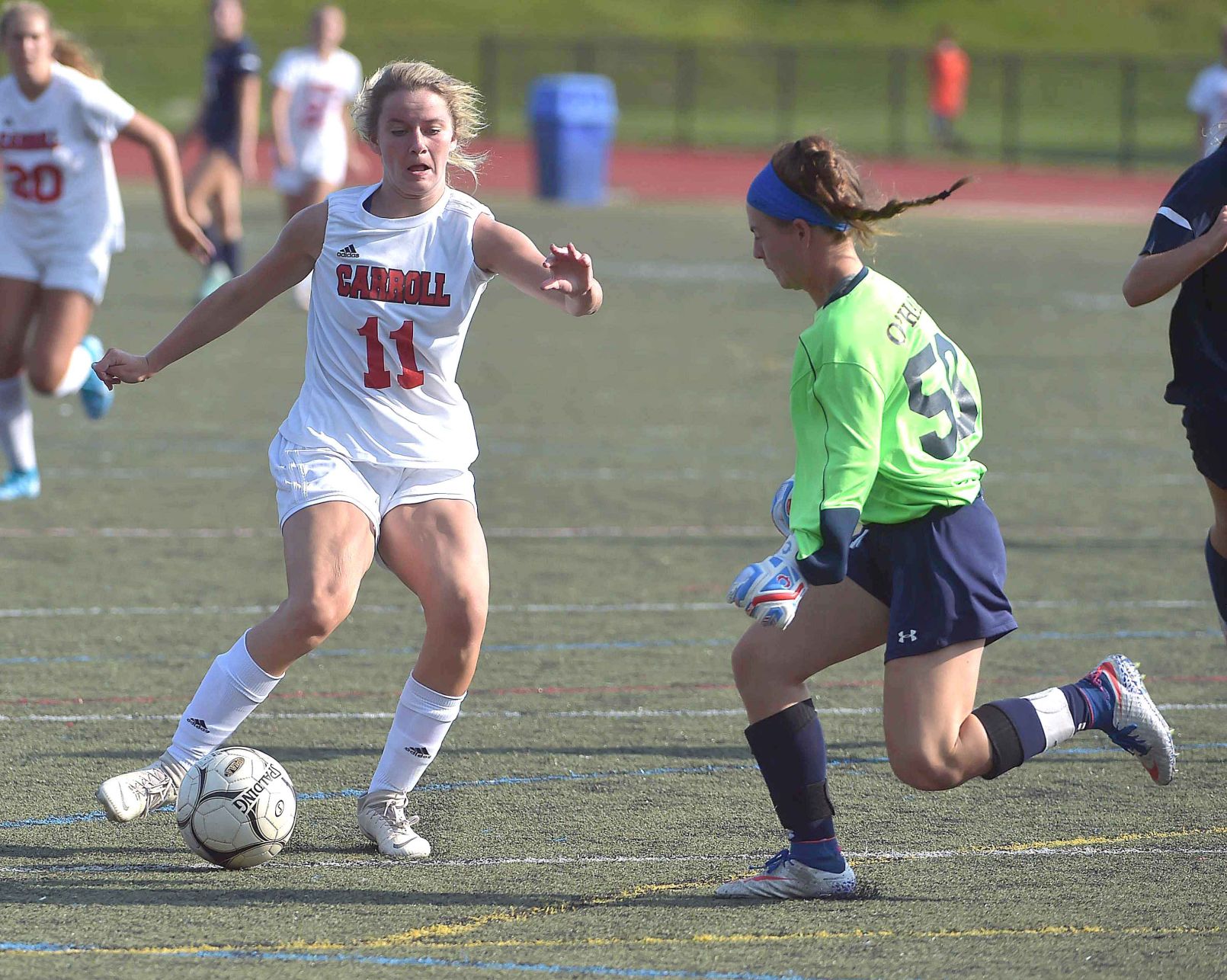 Archbishop Carroll's Keri Barnett, left, challenges Cardinal O'Hara goalie Julia Mirarchi in the second half of a Catholic League game between the teams Tuesday. Barnett had the only goal to win it for Carroll. (Pete Bannan/MediaNews Group)

MARPLE — Keri Barnett and Kiley Mottice were the only two players on the field who saw it Tuesday, but as far as they were concerned, they were the only ones who needed to.

Barnett, the Archbishop Carroll winger, was lurking off the inside shoulder of a center back late in the first half when Mottice got the ball 70 yards from goal and lumped forward a defense-splitting ball. With a few heady strides past a defender and three tidy touches, Barnett had the ball in the back of the net. Against the run of play, Carroll had a lead.

“We’re just really good at getting the ball out of defense and working it up,” Barnett said. “We just happened to be in the right place at the right time, and she passed it up and it worked out.”

Archbishop Carroll’s Keri Barnett, center, is congratulated by teammates Kiley Mottice, left, and Olivia Hoffman after Barnett’s goal, which would hold up for a 1-0 Carroll victory over O’Hara Tuesday. (Pete Bannan/MediaNews Group)

It would prove to be the only goal in a feisty encounter, a 1-0 win over Cardinal O’Hara. And it provided more proof of the burgeoning connection between Barnett, an Interboro transfer, and the rest of the Carroll attack.

The chemistry between Barnett and Mottice, along with a starting forward Kellie Anne Matey, stems from the lacrosse field. All three play for Phantastix lacrosse club, where Barnett was honing skills that led to more than 200 points in two varsity seasons at Interboro before joining the perennial Catholic League powerhouse.

In a different sport and different schools, that link translates, and having soccer in her first fall at Carroll has eased Barnett’s transition.

“We all have a great connection and we have that kind of friendship, too,” Barnett said. “So it kind of works out. … It’s kind of nice because it’s like an automatic friend group. So going into the year, I already knew, what, 20 girls, so that was nice.”

The moment between Mottice and Barnett didn’t only make the difference for Carroll (3-2, 2-0 Catholic League). It did so by being precisely what O’Hara (1-1-1, 1-1) was missing all day.

The Lions had much more of the ball and far better chances, forcing five saves from Carroll goalie Nicollette Cashin and firing four solid chances just wide of the frame. But O’Hara was too seldom able to make the assertive and incisive runs to put Carroll’s defense under serious pressure, settling for a large quantity of low-quality looks.

O’Hara got plenty of industriousness from central midfielders Marrissa Lobb and Sheila Bennetta. It benefited from solid distribution from Makalia Ley in the No. 10 role and physical hold-up play from forward Julia Stellabotte.

But without the speed or foresight to unmoor an organized Carroll defense, Stellabotte was often marooned up top, far from goal and without much help. The result was the zero on the scoreboard.

“It’s frustrating,” Lobb said. “I think we just need to work together more up top. … I just yell to them on the field that someone else has to be up there for her to actually pass it. She has the ball but she doesn’t have anyone to pass it through.”

Carroll mitigated the threat by playing a low defensive block, not trying to catch O’Hara offside but instead cushioning behind them with at least one defender back at all times. The center back tandem of Bella Grube and Kayla DeMola kept tabs on Stellabotte, and freshman Ella Wright turned in a stellar shift as the holding midfielder, putting out fires time and again.

“She’s doing really good, especially getting those balls out of the air,” Grube said of Wright. “That was really great and a very important part of her job. And he’s doing a great job getting her head up and seeing the entire field and playing those perfect balls through.”

O’Hara’s half-chances didn’t add up to a breakthrough. Lobb volleyed just wide in the third minute, and Ellie Miller toe-poked a Ley ball wide of frame in the 10th. O’Hara could’ve tied the game just moments after Barnett’s goal, but a Kellie McCarthy header off a Ley corner in the 39th bounded just wide of an open net.

McCarthy put one wide midway through the second half, and she spurned arguably the Lions’ best chance, played in by Bennetta with only Cashin to beat. The sliding goalie appeared to get a piece of the shot to direct it wide, though no corner was given.

It’s another win for Barnett to add to her first month at Carroll.

“It’s good because we’re 2-0 in the league, so that’s good,” she said. “But we’re working hard defensively. We’re a young team, so it’s going well.”

Strath Haven 3, Lower Merion 1 >> Danielle McNeely scored two minutes after Aviva Kosto had opened the scoring for the visitors, and Devon Maillet and Gianna Zweier added second-half tallies as the Panthers (4-0, 2-0) prevailed in a battle of unbeatens.

Penncrest 1, Ridley 1 >> Shayna Polsky scored off an assist by Abigail Consadene with less than three minutes to play to even up the game. Ridley had taken the lead early in the second half when Jackie Deisler deposited an Abby Karkowski feed into the back of the net.

Garnet Valley 2, Harriton 0 >> Carly Shiller scored twice in the first half, and Kayleigh Saboja made the lead stand up in goal for the Jaguars.

Eleni Zografakis had one of Marple Newtown’s goals.

Agnes Irwin 1, Germantown Friends 0 >> Alyssa Hardin set up Natalie Pansini for the game’s only goal in the first half.

Friends’ Central 4, Notre Dame 1 >> Allie Lynch scored in the second half off a feed from Abby Butler, but the Irish were unable to overcome conceding the first three goals of the day.