Mercury All-Area: OJR’s MacLeod gave everything to the sport she could always count on 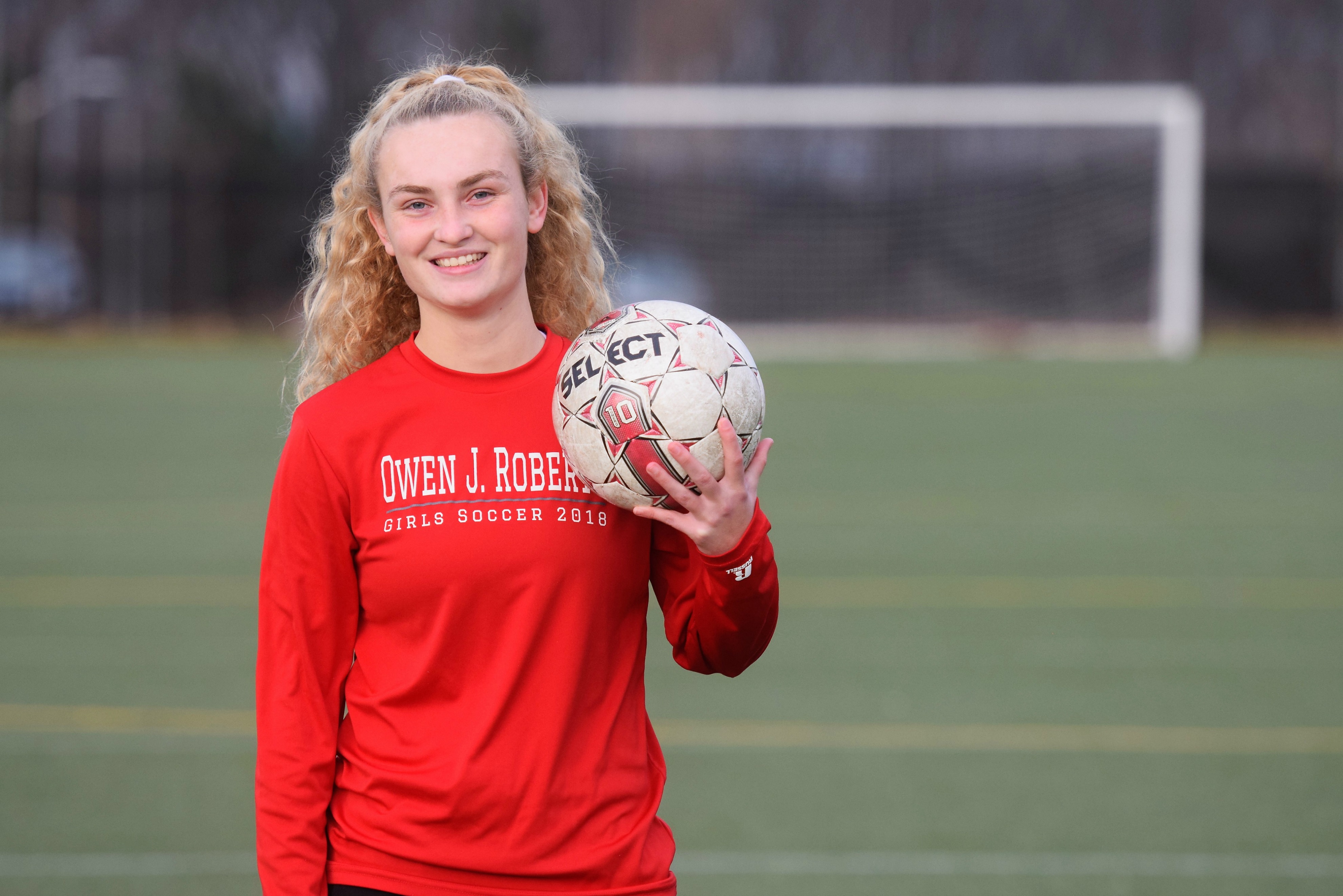 Soccer is just a sport to most players.

It’s not to Kylee MacLeod. It’s her salvation, her companion in times of trouble, her self-administered test of endurance and loyalty.

It’s not life and death, but the threshold of most players and MacLeod are not the same.

“I would rather break my leg than lose a game,” she said with conviction. “That’s my mentality. It hurts more to lose than it does to get hurt.”

What may read like hyperbole isn’t when it comes to the Owen J. Roberts senior. Rather, it’s a glimpse into the mind of a rare blend of selflessness, determination and loyalty.

Those attributes made MacLeod a dream teammate and leader for the Wildcats this fall. Holding down the defensive midfield, the Kutztown University commit expertly protected a new center back pairing with her skill in the air, in a tackle and on the ball while leading Owen J. Roberts to the best goals against average in Pennsylvania girls soccer history (0.095) after conceding just two goals in 21 matches while claiming a second straight Pioneer Athletic Conference championship in a 19-1-1 campaign. “It’s a nice honor, but I’m not the kind of person who says ‘Look what I got.’ It’s more about my team and what we did,” MacLeod said of the All-Area recognition. “You can’t do anything without your team around you. To me, it’s more ‘Look what we got.’

“Knowing that my teammates are so capable, I didn’t feel the weight of the team on my shoulders. … We only had 2 goals scored against us, so obviously I can trust my backs.”

Indeed, MacLeod, along with the center back pairing of freshman Morgan Weaver (All-Area first team) and senior Brinley Beveridge (All-Area second team) and goalkeeper Samantha Hughes (All-Area second team), formed a formidable defensive spine this fall for a team that had an undefeated regular season and was the top-ranked team in District 1 before its upset loss in the second round of districts to Haverford (a penalty kick defeat after a scoreless regulation and overtime).

“She plays the most unappreciated role on the soccer field, that holding center midfielder. (Statistically) you don’t always see what Kylee brought to the table, but she really started that record-setting back four by being a screen in front of them. Rarely could anybody come through our midfield with her there.”

MacLeod made sure she was always there. Even at times when she maybe shouldn’t have been. The physicality and fearlessness that comes with her playing style leads to a higher risk of injury and she certainly had her share.

As a freshman it was a meniscus tear, sophomore year it was knee tendinitis, as a junior it was a right ankle injury that eventually led to ligament damage while pushing OJR to the PIAA Class 4A semifinals. And this fall she nursed a left ankle injury.

“So I balanced it a bit,” she said with a rueful chuckle. “It comes with not knowing when to stop, which is maybe of my greatest character flaws. I feel like it hurts more to let people down than it does for me to physically be in pain. You wrap it up and you play.

“I don’t want to say I haven’t put myself first, but it’s greater to be a part of something than to be something.” Her primary motivation is giving everything to the collective – her team and family included – even in difficult times.

Soccer became an outlet for Kylee in those times, like when her parents separated for a time when she was in elementary school, or when the family faced financial hardship after Andrew lost his job and was forced to move from their family home into an apartment.

“Every moment I had where it was painful for me, I just always was outside doing something,” Kylee said. “I’d always preoccupy myself with something to do because you didn’t have to worry about going home and wondering if the cable is on or if we have the stuff we need to survive. To me, surviving was succeeding and going above.”

She’d train outside relentlessly, running “circuits” in the backyard.

“If I was putting myself through strenuous stuff I didn’t think about what I’m going to eat tonight,” she said.

Hardship took a more fearsome turn when Karel was diagnosed with colon cancer in 2014.

“That was a rough time for me. I always played soccer in times (of difficulty),” Kylee said. “I realized, this isn’t OK, but when I was out here (on the soccer field) things felt OK. In those moments it felt like she was going to be OK.

Kylee and Kierra thrust themselves into the Owen J. Roberts soccer season – Kierra a senior, Kylee a freshman – to be a source of positivity for Karel.

“My mind said to do well so I could go home and tell her so that she doesn’t have to worry about me,” Kylee said.

Karel underwent surgery and received the all clear a year later. Health issues haven’t entirely been put in the rearview – she underwent back surgery last year that put her out of work for 6 months– yet still remains the family’s rock.

Having faced the fear of losing her mother, there’s nothing to fear on the soccer field. Soccer has never let Kylee MacLeod down so she refuses to let it down.

“That’s part of the reason why I love it so much,” she said, “because it’s gotten me through a lot.”

Life has given MacLeod perspective. So has her soccer life.

That perspective came last summer when she received the opportunity to play with the Lehigh Valley Tempest, a women’s summer league primarily for NCAA Division I and II college players looking to stay sharp in the summer months. The experience came her way thanks to the connection with her future college coach, Kutztown University women’s coach Erik Burstein, and her club team coach for the West-Mont United Magic, Tim Raub.

“I went in with the mentality of knowing I wasn’t the biggest or strongest on the field, so I had to be the smartest on the field and that elevated my vision, awareness, where I have to be and what I have to do,” MacLeod said. “I’ve always been really strong in the air, but against 6-0 Division I players, you have to be smart and maybe focus on the second ball. I’m excited for that in the future. I like being challenged by the other team.”

It was an experience that MacLeod and Margusity agree helped her elevate to the next level.

“I really think playing with that team put her over the top for this year,” Margusity said. “Everybody knew she had the potential to be the top player in the league this year.”

She fulfilled that potential this fall while being surrounded by a core whose soccer careers are dually intertwined as OJR and West-Mont teammates (MacLeod, Bailey Hunt, Mia Baumgarten, Gretchen Harken, Kenzie Milne and Simone Karustis).

“Junior year it was the same team and we went into it knowing all about each other, caring about each other, so it became ‘I don’t care if I lose or win because these are people that are going to care about me either way.’ The confidence came from not being fearful of losing.”

“It was trust,” MacLeod said. “I’ve got your back and you’ve got mine.”

Mercury All-Area: Girls Soccer Teams
DLN ALL-AREA: Even from the back line, Downingtown East’s Buckner stands above the rest