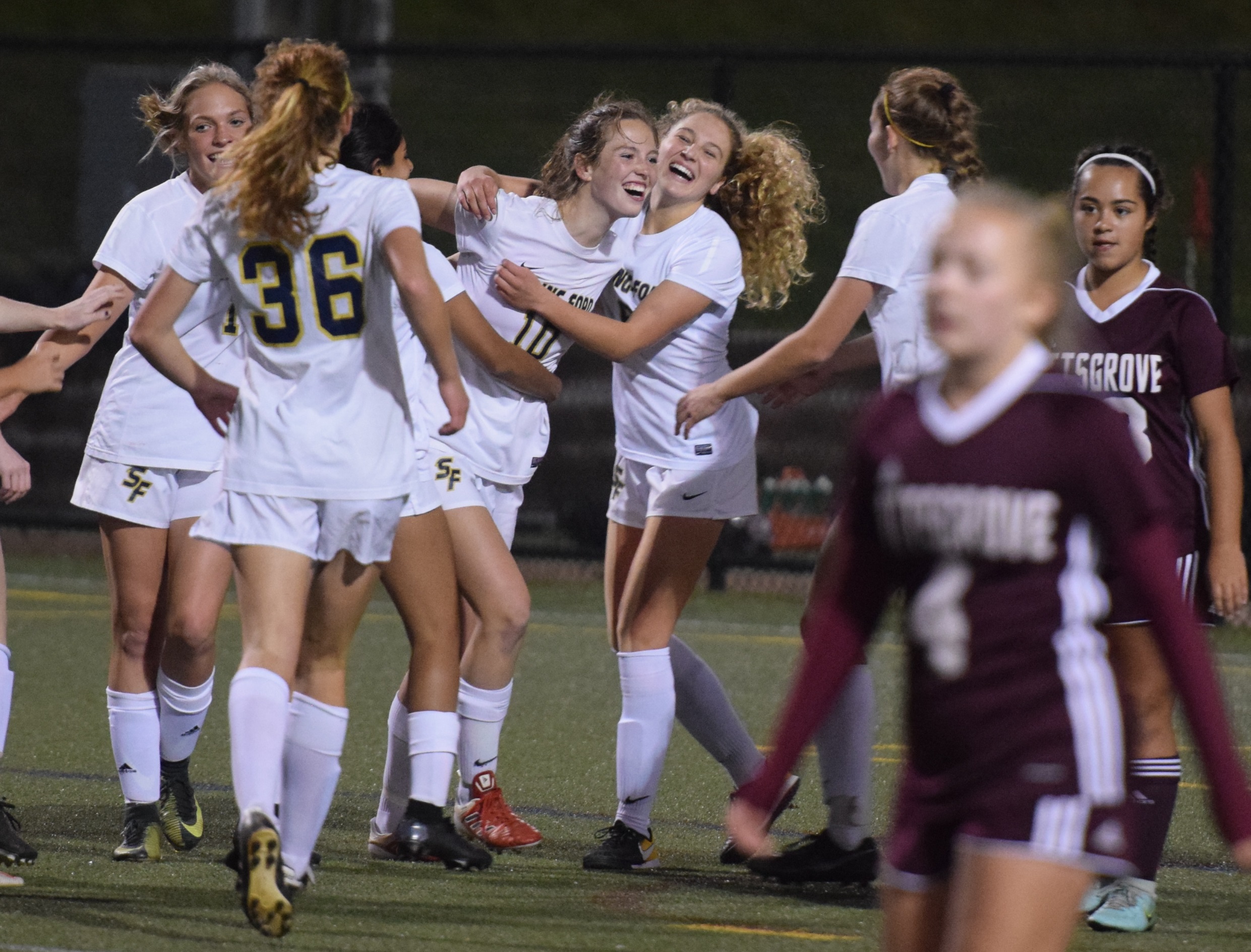 BUCKTOWN >> Claire Sites knew the number off the top of her head.

“We lost 19 people,” the Spring-Ford senior center back said. “It’s different, but it’s good. I think people are stepping up this year. New coaches, new team, a different dynamic and different way we’re playing. But it’s working for us.”

Indeed, the Spring-Ford girls soccer team looks quite a bit different than last year’s iteration. But the results are speaking for themselves – thanks in part to another good use for the top of Sites’ head.

The senior center back’s head was a true difference-maker in the Rams’ Pioneer Athletic Conference semifinal against Pottsgrove Tuesday night. Sites scored two goals via header, including the golden goal game-winner in the first overtime as Spring-Ford turned away Pottsgrove, 3-2, to advance to the league championship game.

Even with the departure of last year’s accomplished class, this fall’s Spring-Ford team can claim something the 2017 edition could not: advancing to the PAC final.

The two most notable carryovers from the 2017 Rams that reached the final eight of the state connected twice for goals as Sites scored on set piece deliveries from junior Ella Curry, who was within inches of a goal herself when she hit the left post in the first half. Sophomore substitute Alyssa Hardin – assisted by Hope Flanegin – scored the Rams’ second goal that leveled the match 2-2 in the second half after Pottsgrove took a somewhat improbable 2-1 lead on Skylar Glass’ second goal with 32 minutes to play in regulation.

In the team’s first PAC Final Four appearance, Pottsgrove acquitted itself excellently after a tentative start. Glass capitalized on an errant back pass to tie the game 1-1 in the 21st minute, against the run of play. But in the second half and overtime, the Falcons, which got strong performances from Hailey Strain, Lexi Zook, Hannah Phillips (defensive save in first half) and goalkeeper Summer Walker (11 saves) grew into the game and went toe-to-toe with a Spring-Ford program that is among the most decorated in the state over the past five years.

“For the first time here and a team with one senior, I was very happy with the performance,” Pottsgrove head coach Steve Mellor said. “It’s a bit disappointing to have had a lead in the second half especially after getting that one back, getting a little lucky on Skylar’s first goal. We changed formations a bit and I thought it could have been 3-1 right after Skylar’s second but we weren’t able to finish.”

The Falcons, the Frontier Division champions and No. 2 seed, had two great chances after taking the lead, one from Glass, the other on a nice counter with Strain, Glass and Emily Vishio, who got an excellent recovery save out of S-F goalkeeper Riley Wallace (2 saves) to keep it a one-goal game.

Once Spring-Ford got back on level terms through Hardin, it felt like it was the likelier team to get the win. Seemingly, they just needed another chance for Sites to use her height advantage and versatile head again.

“It was good competition tonight,” Sites said. I think some of us might not have been expecting Pottsgrove to step up like they did, so I think it was a really good game. Kudos to them for their work and great season.”