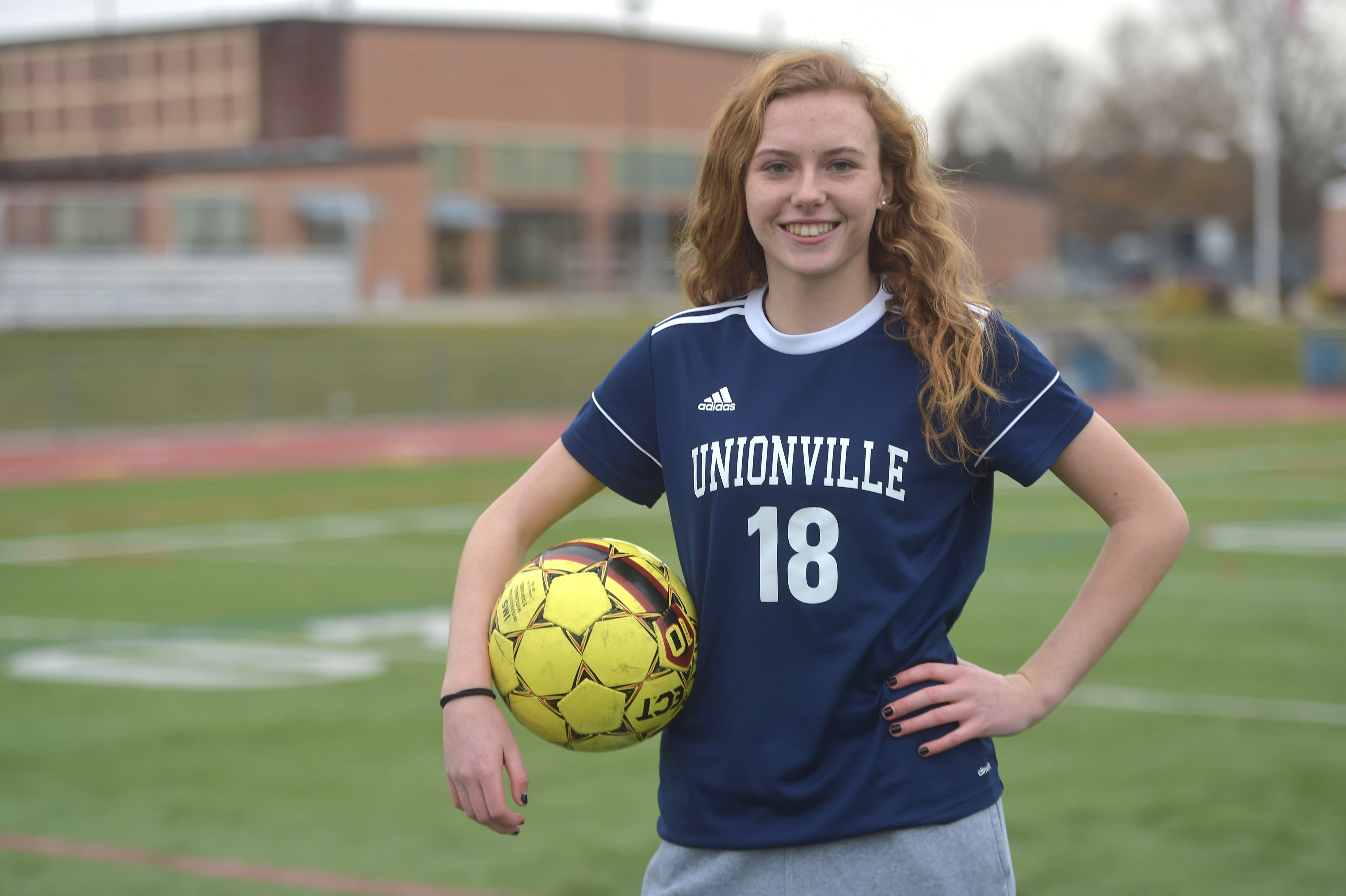 Ratasiewicz turned to a bystander, and with a smile on his face, said, “not bad for a lacrosse player.”

Though soccer may be her “second sport,” Hineman has proven to be as talented as anyone in the state.

The senior was the high octane fuel for the potent Unionville attack this season, which led her to be named the Daily Local News All-Area Girls Soccer Player of the Year.

“Honestly, at first, I was shocked,” said Hineman on the honor. “Our league and area is so competitive with girls soccer. Everyone on our team I feel like this year played outstanding, so to be chosen is humbling, but it feels great.”

Hineman has been a fixture on the Unionville soccer scene for the past three years. This year, she put it all together to terrorize area defenses.

“She has meant a lot to the team,” added Ratasiewicz. “She’s been a starter since she was a freshman and she has grown and matured into a very good soccer player.”

Hineman collected 20 goals on the year and 14 assists. She had more than capable help from Jackie Hug (12 goals) and Sammi Ciccarelli (10) as the three combined for more than half of the team’s output.

“What made it click the most was that we were playing with girls we’ve played with since about the third grade,” Hineman said. “And we were seniors this year, so our chemistry and our knowledge of the game was amazing and we were able to click. We also had so many siblings on the team. It just makes a great dynamic and makes it easier for the younger girls to click.”

The process of getting to know each other was furthered by off-field activities that helped the unit become closer.

“We had team sleepovers, team dinners, just so many events to bond us together,” she said.

“The first Rustin game, it was just 1-0, but we were missing our best defender and our goalie was out,” she said. “The second time we played them, we were back to 100 percent and that was my favorite game of the year because we dominated them.”

Hineman did show up in games against the Golden Knights. She scored in both matchups with Rustin this season, and one is particularly etched in her coach’s memory.

“In the second game, she scored on a corner kick that she started her run from the outside the 18 and met the ball perfectly,” said Ratasiewicz. “I guess she liked playing against Rustin because she scored some big goals against them.”

The Indians polished off a perfect league mark at 12-0 and won the American Division title, but the undefeated league season didn’t weigh heavily on their minds, according to Hineman.

“Our coaches did a great job on keeping us focused on the game we’re playing,” she said. “We focused on our own game, one at a time, not what the other teams were doing. We just focused on bettering ourselves each game and in practice. We didn’t focus on stats or things like that.”

The season did have a disappointing end, as the Indians dropped a pair of 1-0 games in districts, first to Neshaminy in the quarterfinals. Following a 4-2 win over Quakertown in the first playback, they were denied a berth in states by Council Rock South, also 1-0.

Ratasiewicz was succinct in what made Hineman so dangerous.

“Her pace put a lot of pressure on the defense. She could stretch the field and that created more space for the other players,” he said. “Her speed and athleticism put fear in the other team.”

Hineman is also a star in girls lacrosse on a team that has become a perennial power in the area. She will attend Duke on a lacrosse scholarship.

“Soccer was my main sport until about eighth or ninth grade,” she said. “At about the ninth grade is when they make you choose or get more serious about one sport and most soccer clubs wouldn’t allow you to play both sports, and all the lacrosse clubs in the area, they let you play both sports, they actually encouraged it. So, that’s what I liked about lacrosse,”

No that the highly competitive Hineman has, most likely, played her last school-organized soccer game, she took a little time to reflect on what the game has meant to her.

“I’ll always love soccer. Soccer is one of my favorite sports,” Hineman said. “It sucks that I can’t play soccer and lacrosse in college. It is very bittersweet, but I can use everything I learned from soccer in lacrosse.”