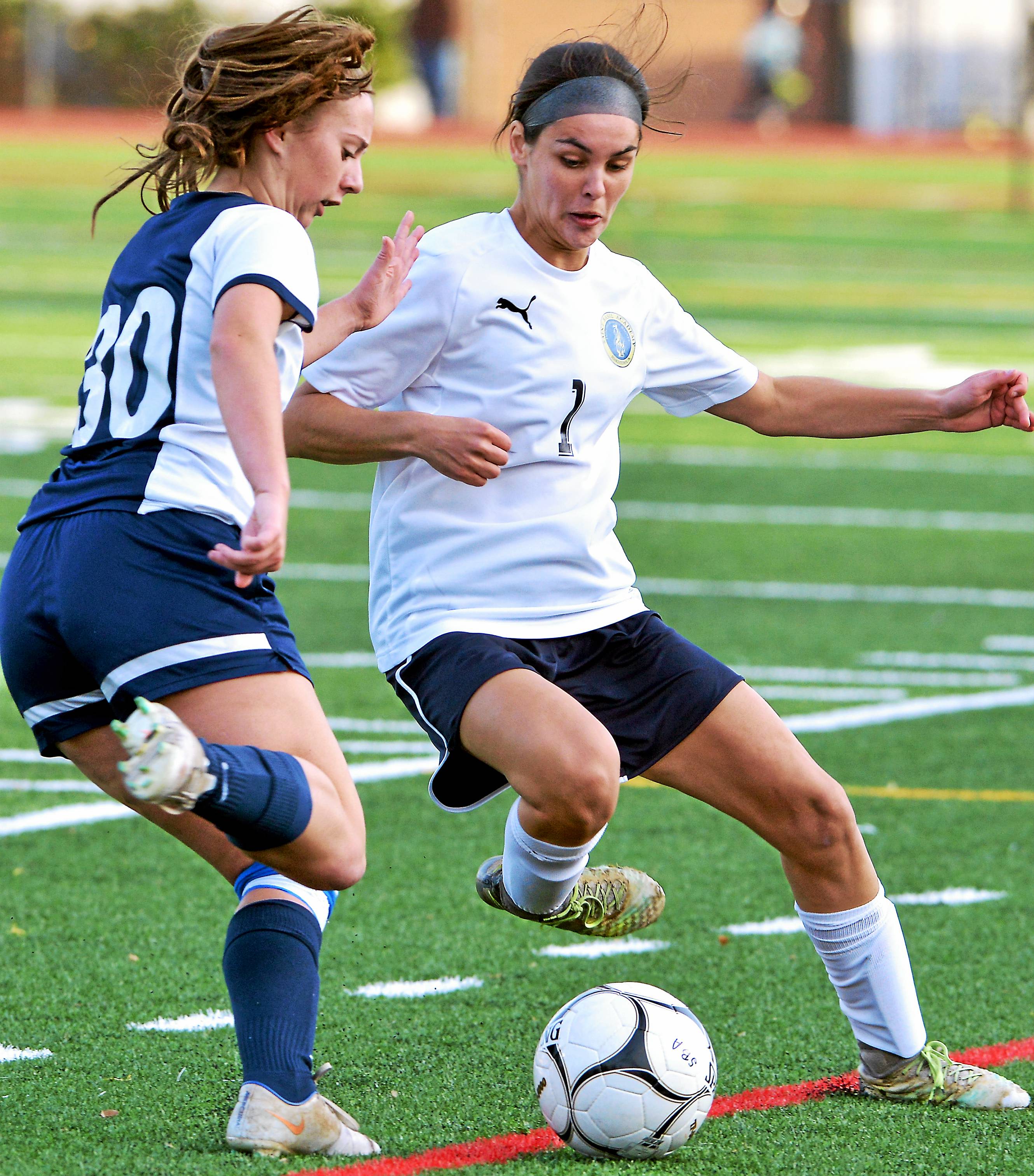 SOUTH LEBANON >> Much of what makes St. Basil Academy’s girls soccer team so successful is easy to see.

The Panthers play a free-flowing style that gets a lot of players involved and the ball moving. What isn’t always as apparent is how determined St. Basil is or how much hustle the Panthers put in to making things move so smoothly.

They needed all of that hustle and determination Saturday afternoon and it was plenty visible as the Panthers made school history by topping Midd-West 2-1 at Cedar Crest High School in the PIAA 2A quarterfinals and advanced to the state semis for the first time.

“We didn’t have the best ending last year, this game is where we lost last year so we’ve been playing with this determination all year,” senior defender Paulina Storck said. “This was the game we wanted to make school history. Our biggest goal was to get back to states, then this became our biggest goal, to be the first team that’s gone this far.”

Midd-West, the District 4 champion, was a very solid side and the Panthers knew they were in for a game after the Mustangs knocked off Lake-Lehman, the team that ended St. Basil’s season last year, in the first round. The Mustangs were led by senior midfielder Kelli Beiler, a Penn State commit.

Beiler scored the game’s first goal on a well-designed and perfectly taken free kick but otherwise had her touches and time limited on the ball. As the teams prepared to hit the field, St. Basil coach Bob Opalka turned to senior Cheryl Remolde with specific instructions regarding Beiler.

“Be her friend,” Opalka said, meaning it would be up to Remolde to mark the future Nittany Lion in the offensive half of the field.

“I was doing my best to stay tight and not let her turn because she had good footwork,” Remolde said. “I knew if she got the ball, she has great placement on her passes and that would make it hard for the rest of the team, so I just tried to do my part and keep her from getting the ball. It was just me letting her know I was always there.”

St. Basil wasted no time at attacking Midd-West and putting the Mustangs’ back line under pressure. Throughout the match, Midd-West defenders were forced to make quick decisions, many of them leading to the ball being hit out of bounds and giving the Panthers a flurry of throw-ins.

While the District 1/12 champions had the early advantage, they were also trying to adapt to the way the game was being called. In the AACA, St. Basil has to play tough and physical, especially against the league’s bigger schools. Often teams from the southeastern part of the state find officials, like the District 3 crew on Saturday, a little quicker to call fouls.

It was one of those fouls that set up Midd-West for a free kick just outside the box about 15 minutes in. A pair of runners made criss-crossing runs over the ball before Beiler drove it to the far post, a shot no keeper could have gotten to.

Down a goal, the Panthers had two paths to take and instead of collapsing, the recognized the goal was against the run of play and they simply needed to keep doing what they had been up to that point.

“We were focusing on watching our hands because they were obviously calling a lot, so we had to stop playing into what they wanted us to,” Storck said. “We didn’t want to give up any more kicks close to the net.”

Continuing to press the Midd-West backs, St. Basil earned a corner kick. Maddie McCrae’s service found Erin Gilsenan in front of the net, but her initial shot was blocked by a defender. The ball however, found its way back to Gilsenan’s foot and this time, she buried the equalizer with 23:02 left in the half.

St. Basil scored the eventual winner on a purely hustle play by senior Lauren Baldo. After a throw-in deep in Midd-West’s end, a cleared ball found Remolde who promptly volleyed it back it. Her looping ball found its way to open space in the box, with Mustangs keeper Carli Marshall racing after it. Coming from the other direction was Baldo.

The senior winger beat Marshall to the ball and hit a good header into the net with 7:20 left in the first half. St. Basil kept pushing for another goal, but couldn’t put one away.

With the way the defense and keeper Brooke Shissler were playing, it didn’t matter too much. Storck, Brielle Piecyk, Jules Gura and Ann Marie Coates were all over the back end defensively and when they had to clear balls, it usually gave one of their forwards at least a chance to get it.

Storck noted Coates and Pieczyk’s play in particular late in the game when St. Basil was doing all it could to deny Midd-West any kind of opportunities.

Shissler made five stops to pick up the win and had her backs and helpers from the midfield in the right spots.

“They know, we’ve been working together for a long time now,” Shissler said. “We work hard for each other and play together.”

Her biggest play of the game came early in the second half. Midd-West’s Erin Tompkins managed to get behind the defense and went 1-on-1 with Shissler. The Panthers senior keeper edged off her line and got as big as possible, her leg catching Tompkins’ shot and sending it back into the box where the defenders cleaned it up.

“I don’t even know, I just did my best to watch my positioning and angle,” Shissler said. “I just reacted.”

Storck said the Panthers used an extra player back to help cover on Saturday and while they sometimes struggle marking, having Shissler behind them allows the defense some margin of error.

“She’s the best keeper in the district, I think,” Storck said.

“Only because I have the best teammates,” Shissler countered.

St. Basil will face District 11 champion Northwestern Lehigh, a 2-1 overtime winner on Saturday, in the semifinals on Tuesday.

For the Panthers, and their 12 seniors, the guarantee is only one more game but their determination has taken them farther than any St. Basil team before, so they have eyes on getting all the way to Hershey.

“We’re all seniors so we don’t want our season to end,” Baldo said. “We want to go as far as we can take this because it really is up to us at this point. At this point it’s all or nothing and that’s what keeps us going.”