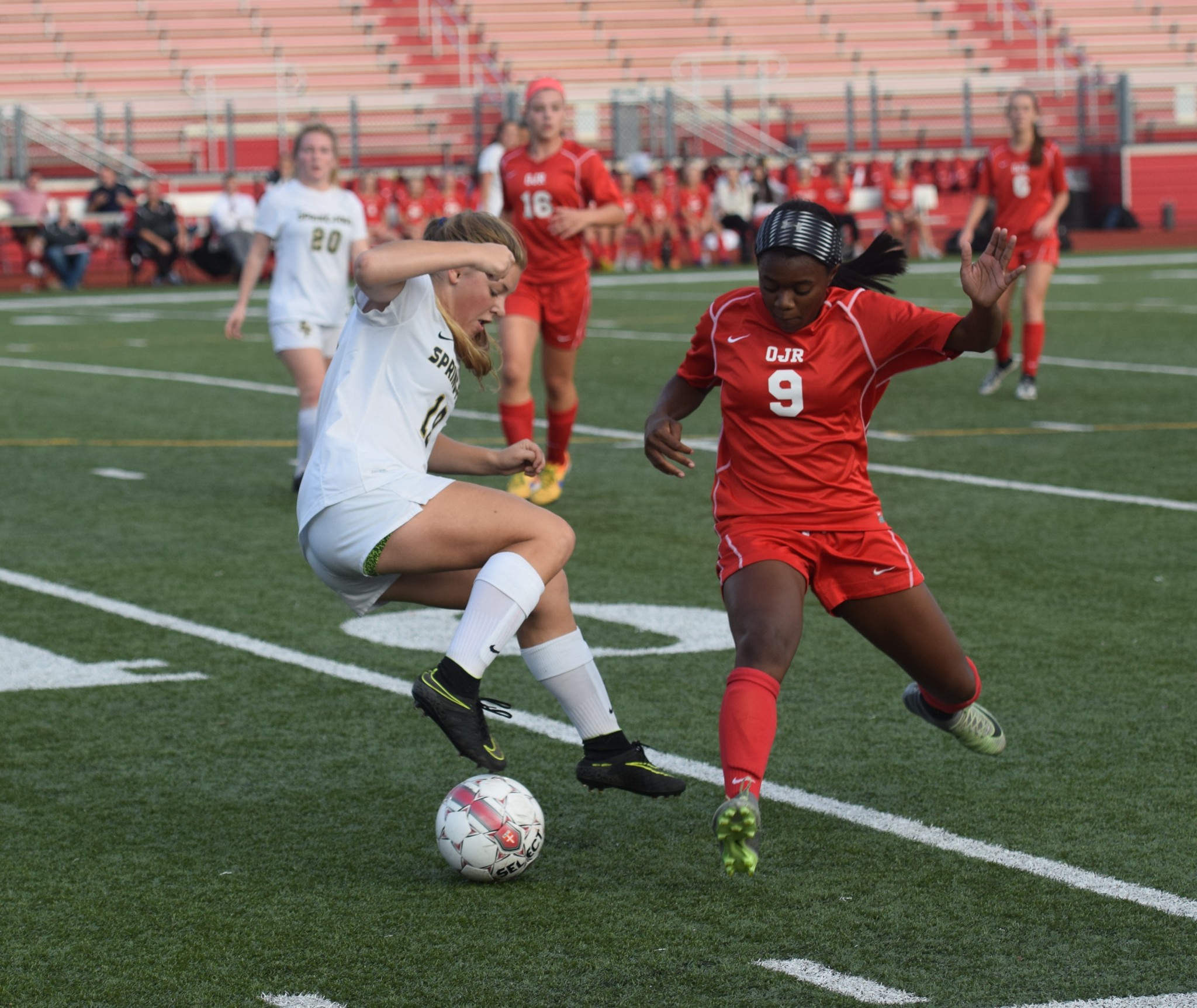 One game stands in the way of a championship rematch in Pioneer Athletic Conference girls soccer between reigning champion Spring-Ford and Owen J. Roberts.

Owen J. Roberts earned the No. 1 playoff seed and Liberty Division championship on the final day with a 2-1 win over Spring-Ford, proving their 16-1 record and place as a top 5 team in the District 1-4A power rankings (No. 2 entering Monday).

Senior-centric Pope John Paul II ran away with the Frontier Division title and the No. 2 seed, while Spring-Ford settled for the wild-card No. 3 seed and Boyertown surpassed the multi-team chase pack for the final place in the Final Four.

The semifinals are set for 7 p.m. Tuesday at Owen J. Roberts. The matches will go on concurrently with No. 1 Owen J. Roberts hosting and No. 4 Boyertown meeting in Wildcat Stadium while No. 2 Pope John Paul II and No. 3 Spring-Ford face off on Wildcat North.

Here’s a look at the Final Four matchups:

Playoff history >> OJR: The Wildcats ended their uncharacteristic three-year PAC playoff drought last year and reached the final, losing to Spring-Ford 2-0. OJR is 10-time PAC champion (1999-2007, 2010), the final three in the Final Four era. … Boyertown returns to the playoffs after a one-year layoff. The Bears won the championship in 2015, 1-0 over eventual PIAA quarterfinalist Spring-Ford. The Bears are four-time champions (2009, 2011-12, 2015).

On Owen J. Roberts >> The ascent of the Wildcats’ senior class has reached its pinnacle and the team is reaping the benefits of featuring many four-year starters, which includes All-State defender Kylie Cahill and speedy forward Mahogany Willis. Complementing that duo is midfield trio Caroline Thompson, Julia Dalton and Kylee MacLeod, as well as Mia Baumgartner, Kenzie Milne – who had the game-winning goal vs. S-F to give OJR the division – Kali Pupo and freshman forward Sarah Kopec. There isn’t a hole in the lineup of coach Joe Margusity, who surpassed 400 career wins on Oct. 4, and Willis provides a safety valve – even if things aren’t going great, she can turn nothing into something, like she did twice in their last meeting with Boyertown.

On Boyertown >> While the other three semifinalists seemed predetermined to make the PAC playoffs, it was more of a grind for veteran coach Bill Goddard’s Boyertown to emerge from the bunch. In fact, ‘a grind’ is a good way to describe most Boyertown’s season. With more than a couple quality players – namely forward Kaleigh Gallagher, midfielders Corinne Renninger and Hanah Mutter and defender Shana Kabinoff – the Bears’ have gotten the wins they were supposed to, but lack a signature win this season, which looks to have kept them out of the district playoffs.

Matchup >> What Tuesday’s semifinal means to OJR and Boyertown may be different: for the Wildcats it’s one step on what they hope is a postseason run that extends into November. For the Bears, their season is on the line. In their last meeting, Boyertown was largely the better side. Its ‘reward’ was a 2-0 defeat, emblematic of OJR’s ability even when not at their best and the Bears’ inability to create quality scoring chances against top opposition. Unfortunately for Boyertown, that trend has defined their season and it’s hard to envision it changing up against Cahill and company.

Pope John Paul II’s Avery Cotter leaps into the arms of Kayla Mesaros after scoring a goal on a corner kick by Julia Owens during the first half against Phoenixville on Wednesday. (Austin Hertzog – Digital First Media)

Playoff history >> The Golden Panthers make their fourth-straight trip to the Final Four. They reached the final in 2014, a 3-0 defeat to Spring-Ford. … The Rams make their fourth-straight trip since bursting on to the scene in 2013 when it reached the PIAA final. They have won three of the past four PAC titles (2013-14, 2016). … Spring-Ford downed PJP 4-1 in the 2016 semifinals.

On Pope John Paul II >> Coach Stew Sherk’s Golden Panthers churned through the regular season, mowing down all Frontier Division competition – they won by at least three goals in all 10 games – and lost their only game to OJR, 3-2 on Sept. 22. It’s a balanced, experienced team led by perennial 20-game scorer, senior forward Kayla Mesaros, winger Liz Kropp, midfielders Avery Cotter and Carson Tracy, defenders Julia Owens and Monica Rapchinski and goalkeeper Colleen Morton. PJP doesn’t have an appreciable weakness and looks primed for a deep postseason run that could result in the team’s first PIAA berth.

On Spring-Ford >> The Rams, led by coach Tim Leyland, have become the gold standard in the PAC since 2013 but enter the postseason losers of two straight (2-1 to OJR on Oct. 12, 2-1 to District 3 No. 1 Cumberland Valley, 2-1 on Oct. 14) and 3-3 in their last six. With the likes of 2016 Mercury All-Area Player of the Year Gabby Kane in the midfield, along with Laura Fazzini, plus defenders Molly McHarg and KK O’Donnell, the 20-deep Rams have the ability to get back to the irresistible form they showed in a 4-3 win over Owen J. Roberts on Sept. 15. But that will take rediscovering their scoring instinct and defensive stinginess.

Matchup >> PJP vs. Spring-Ford may be the most heavyweight semifinal in league history and probably the toughest to call. There have been upsets – Upper Perkiomen’s run to the 2008 title comes to mind – but few have had so many possible scenarios that could play out. When everything else is equal, pedigree may decide it and the Rams have that edge.