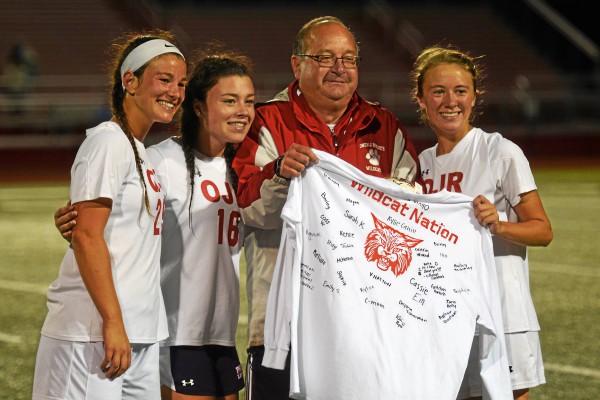 BUCKTOWN >> Past, present and future of the Owen J. Roberts’ girls soccer program descended upon Wildcat Stadium Wednesday night in hopes of seeing a milestone reached.

Center stage was 22-year head coach Joe Margusity, the architect of many years of Wildcats’ success.

With another positive result added to the ledger – a 2-0 victory over longtime rival Boyertown – the many wins of Margusity’s coaching career reached 400 victories, one of just two girls soccer coaches in Pa. history to achieve the mark.

Senior forward Mahogany Willis scored a goal in each half – both times on assists from junior Mia Baumgarten – while the OJR defense, led by senior Kylie Cahill, denied Boyertown consistently throughout, holding them to a single shot on goal.

The state record of 435 wins in girls soccer is held by Hampton great Frank Christy, who retired in 2012, according to the Pa. Soccer Coaches Association website.

At 14-1 overall (7-1 PAC Liberty), this year’s Wildcats have the makings of a team worthy of being mentioned with the past distinguished OJR teams that include the 2003 PIAA championship team or the 2005 PIAA runner-up.

“I feel great,” Margusity said. “There was a lot of alumni here and got a lot of nice texts from alumni being glad to be a part of all the wins that led up to 400. Hundreds and hundreds of kids added to that, it wasn’t just this team but this team will be special because they’re the team that won the 400th. But somebody had to win the first one and there’s a lot of great kids that have come through here.”

Margusity, who collected 45 wins while guiding Cheltenham prior to Owen J., was presented a game ball and commemorative signed sweatshirt by team captains Cahill, Caroline Thompson and Danika Swech in the postgame.

“Our whole high school career we’ve had that mentality of trying to win for the team and that came with the perk tonight of Coach’s 400th win,” said Cahill, a four-year starter and returning PSCA All-State defender. “We’re all in for each other and for him. We try to go out with that winning mentality every game.”

Boyertown was anything but charitable though, likely deserving a better result after being the better team in the first half. The Bears are 4-4 in the PAC Liberty and are 7-4 in the PAC (7-7 overall), and remain in the chase for one of the PAC’s two wild-card playoff spots for the final four.

“Our Achilles’ heel has been our inability to score in close games. I didn’t think it’s a lack of effort, more a lack of execution,” Boyertown coach Bill Goddard said. “I thought our kids played their hearts out.

“Forty minutes in we’re down 1-0 nothing and it was a bit of a cruel result to be down. But they fought the entire game and I was happy the way they continued to fight. But you have to give credit to Owen J. They made the most of the two mistakes we made and ultimately you get points for scoring goals.”

Willis got free behind the Bears’ defense against the run of play on a Baumgarten ball over the top and won a race to the ball narrowly ahead of Boyertown keeper Mattie Gallagher for the 1-0 lead in the 25th minute.

Boyertown had six shots to OJR’s three in the first half but only one on target.

OJR gained more traction in the second half and got their reward with 24:45 remaining and Baumgarten played Willis down the left side. She got near the end line and netted it past a charging Gallagher for the final margin.

“I think it’s easier now with playing a two-forward system so it’s easier for me to work with someone else, communicate and pass and move better up top,” said Willis, who has paired with Sarah Kopec this season.

Boyertown’s best chance was near the midpoint of the second half on an indirect free kick as OJR goalie Samantha Hughes (two saves) made a sharp diving save on Corinne Renninger’s well-hit shot. Otherwise, defenders Cahill, Kali Pupo, Emily Sands and holding midfielder Kylee Macleod didn’t allow a quality scoring chance despite the threat of the Bears’ Kaleigh Gallagher, Bria Smith, Corinne Renninger and Grace Conover.

“It was good to play Boyertown because it gave that playoff atmosphere and we needed that because we hadn’t been pressured much in the last couple games,” Margusity said.

It was a fittingly tight affair between the Bears and Wildcats, the defining rivalry of PAC girls soccer for many years, a fact not lost on Margusity.

“It was nice to reach (400 wins) against Boyertown and Billy because they’ve been such a big rival,” Margusity said. “That makes it even more special because I have so much respect for Billy and that program.”