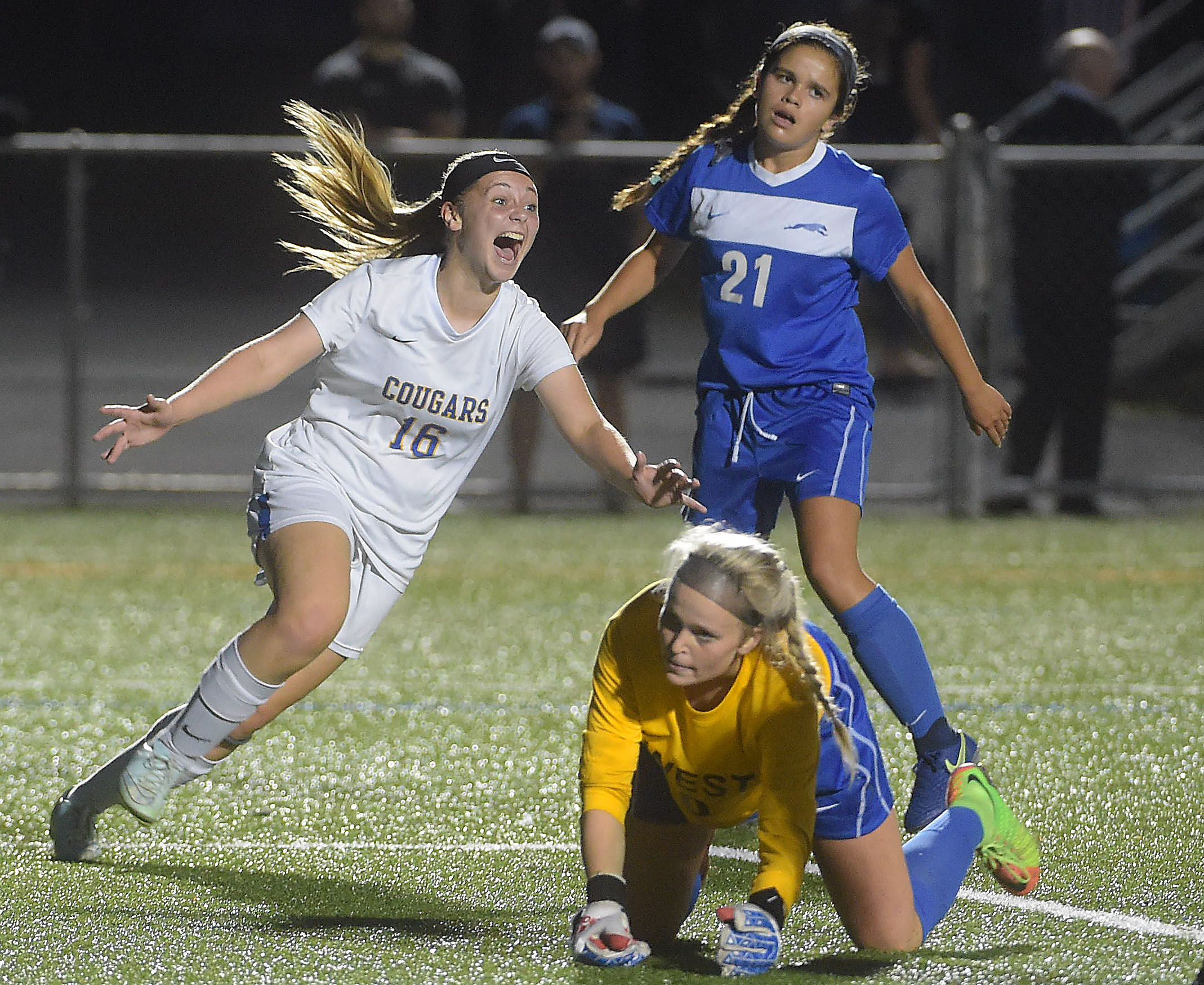 DOWNINGTOWN >> Suffering from graduations and other defections, the early part of the Ches-Mont League National Division season may not be the optimal time for a young Downingtown West team to come face-to-face with Downingtown East. But, the renewal of the rivalry took place on Monday at DiSerafino Stadium with Downingtown East jumping out early to take control.

The Cougars (2-0, 2-3) scored on three of their first four shots as they jumped out to a big halftime lead en route to a 5-0 girls soccer victory.

“We’re working through some things,” said first-year coach Katelyne Phillips. “We’re really young and we’re working out the kinks. We are getting things figured out and connected.”

The Whippets start just one senior and have only three on the roster. The Cougars, meanwhile, are coming off their third one-goal nonleague loss this season, falling to Owen J. Roberts on Saturday.

East didn’t take long to get on the board, when nearly six minutes in, junior midfielder Livi Lawton collected a through ball from Emily Buckner. Lawton ran at the West defense, settled down a deflection, then rifled a shot from about 20 yards out past goalie Kayla DeTruex into the top right corner for the lead.

“Emily Buckner made an amazing pass through two defenders, and I ran on to it. I was dribbling to the middle and I just shot it, hoping it would go in,” said Lawton. “It was a good win. We haven’t beaten West my high school career, so it felt good.”

The Whippets (0-2, 0-2) nearly struck back moments later. Sophomore Kristen Mopner’s run into the box was stopped by a foul, resulting in a penalty kick. Sam Sipes stepped to the spot, but her kick squarely hit the left post and stayed out.

East capitalized on that miss moments later as Angela Carcella rose up to meet a corner kick that drifted over the hand of DeTruex for a clear header and a 2-0 lead.

“Downingtown West is a good team and they’re well coached, so you’re not always going to have three kids finish like that in the first 15 or 20 minutes,” said Reed.

Rebekah March made it 3-0 with 26:53 on the clock as she converted an Emma Marrollo pass.

West had another golden chance to get on the board toward the end of the half. Emily Feeney blasted a shot at the edge of the penalty area. Courtney Dunlop dove to her right to make a right-handed stop.

It was Dunlop’s only save of the first 40 minutes. Ashley Buchheit came on in the second half and made three stops.

“Our goalie deserved it — both of them,” said Reed of the clean sheet. “They were tested somewhat tonight and they showed up. They’re good keepers. They had a good game.”

The Cougars completed the four-goal half with a little over a minute left. Amanda Wagner latched onto a loose ball following a goal-mouth scramble, and made no mistake into the open net.

They completed the scoring with a little under 12 minutes left on a Emily Wurzel tally.

West controlled more of the play in the second half, but were unable to turn that into quality chances or goals.

“We worked well, not just the back line, but everyone working on winning the ball back if they lost it,” said senior defender Taylor Platt. “It helped that we communiated with everyone and stayed positive the whole game.”

The Cougars go on the road to face Bishop Shanahan on Wednesday, while the Whippets host Coatesville.