Fords’ Durfee one step ahead of old friend in topping Radnor 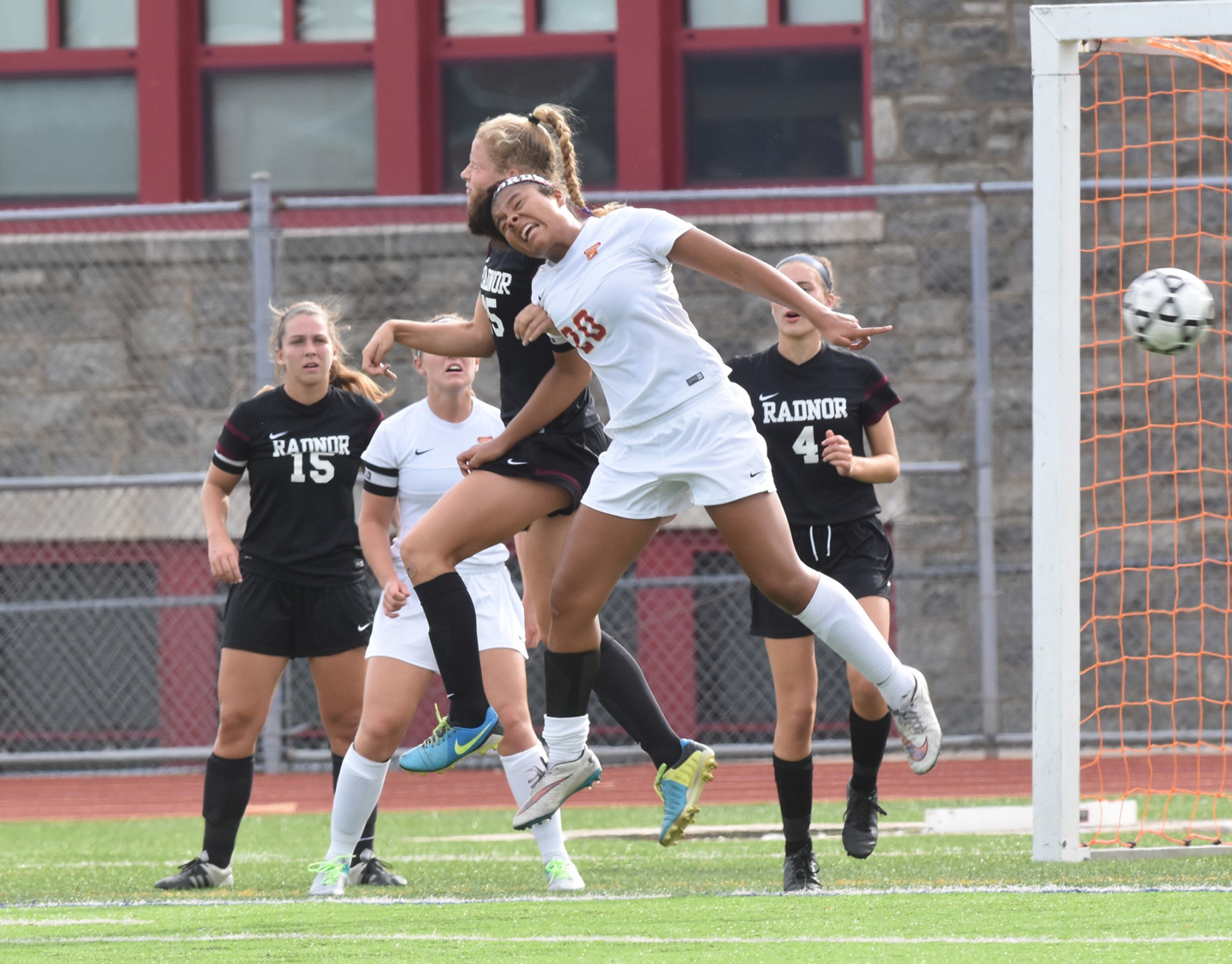 HAVERFORD >> Amelia Durfee’s face breaks into a wide smile when the conversation Tuesday steers toward her former club teammate and close friend.

For 80 minutes at Haverford High, Durfee and Radnor’s Maura Holst battled in the engine room of midfield. And when Durfee’s Fords prevailed, 1-0, in a Central League affair, the little dose of good-natured bragging rights added some fun to the result.

Haverford’s Annalena O’Reilly, right, getting a step on Radnor’s Audrey Rosenblum, scored the only goal in the Fords’ 1-0 win over Radnor Tuesday. (Digital First Media/Anne Neborak)

The foundation of Annalena O’Reilly’s goal in the seventh minute that proved the decider and of so much of the Fords’ success was their midfield pressure, inducing turnovers, denying the ever-dangerous Holst possession near goal, forcing mistakes that the Fords’ speedy forward line could pounce on.

That balance was shifted not just by Durfee bringing the “A” game in the final meeting between the seniors, but in having a little extra information in the effort to minimize the talented Fordham commit Holst.

“Definitely keeping her in front of you, and always watching the ball,” Durfee said. “And do not watch her feet.”

“I definitely think it helps,” Holst said of the familiarity. “Everyone develops tendencies from a young age, so it’s kind of good to have that extra bit of knowledge in your back pocket. Everyone has a toolbox of little things they can pull out, and having someone know that already is difficult for sure.”

Whatever the individual relationships, the Fords enlarged the advantage with superior collective play, pressing the Radnor defense and midfield wisely and in unison to dominate the balance of play.

That’s what occurred in the seventh, when Durfee recovered a loose pass deep in midfield and fed Sadie Gold, who slipped a through ball behind the defense that O’Reilly latched onto, rounded goalkeeper Alexa Solomon and buried into the net.

“The ball was played overtop, so I just made a diagonal run and touched it around the keeper,” O’Reilly said. “I try to get wide and look for a diagonal ball across. That’s our main focus usually at practices.”

The Fords’ strong start to the season is contingent on a team-centric approach into how it presses. It hinges on confidence in a veteran backline that includes co-captains Brianna Blair and Maddie Santoro that didn’t put a foot wrong Tuesday.

And it relies on getting everyone on the same page, from sophomore holding midfielder Britt Riegler to underclassmen like O’Reilly, a sophomore, and the junior Gold running the forward line. Hence the post-game hoarseness of Durfee, one of the team’s prime communicators.

“I think as we’ve gone on in the season since we’re like halfway through, everyone’s gone with the flow and they’ve realized what to do,” Durfee said. “We just need people to keep up the communication, and then everyone will step up together. Obviously we have our faults once in a while on plays, but as a whole, I think we keep improving on it and it’s an important part of the game.”

After Radnor was lucky to escape the first half down just the one goal, the Raiders rebounded and evened play in the second half, though it didn’t translate into many chances. Their first shot of any consequence came just before the first-half buzzer courtesy of a Nicole Massimino rip wide, and the Raiders still waited until the 58th minute for the first shot on goal, a Holst effort from distance.

Holst couldn’t direct a 30-yard attempt on goal with eight minutes to play, and another Holst shot lofted from well outside the box with a minute left was corralled by Alison Durfee for one of her two saves.

Solomon made five saves before leaving midway through the second half with an apparent leg injury, the product of a collision with Amelia Durfee in the box where the latter’s shot was tipped just wide of the cage.

Even from the wrong side of the final ledger, Holst agreed with Durfee on the entertainment value of the meeting of former mates. Though the Raiders have just one win on the season with a young squad, Tuesday’s encounter maintained some special meaning for Holst, as well.

“It’s kind of fun to play against people you know,” she said. “It’s exciting when you beat them; it’s kind of frustrating when they beat you. … I thought it was fun.”

Strath Haven 8, Upper Darby 0 >> Lizzie King scored twice and dished an assist, and Grace Forbes set up both of King’s goals and one for Maddie Forbes as the Panthers led 6-0 at the break.

Conestoga 5, Marple Newtown 0 >> Halle Robinson made 12 saves in goal for the Tigers, but Madie French and Emily Wertz scored twice each to pace the Pioneers to victory.

Episcopal Academy 1, Germantown Academy 0 >> Izzy Rohr scored off a feed from Josie Konopka in the first half, and Morgan Messner kept the clean sheet as the Churchwomen drew first blood in the battle of league title combatants last year.

Christian Academy 7, Faith Christian 2 >> Lindsay Haseltine scored five goals, and Hanna Sareyka tallied the other two as the Crusaders (4-0) led 4-1 at half and never looked back.

Agnes Irwin 5, Archbishop Carroll 2 >> Maria Pansini scored twice, one off a feed from Natalie Pansini, who also tallied to elad the Owls.

Paige Mastripolito finished both of the Patriots’ goals.

Cardinal O’Hara 2, Chichester 0 >> Ziyanna Wilmer and Rylee Nugent scored for the Lions, and Kerry Patterson came up with four stops for the Lions.

Ziara Ford made 10 saves for Chi.

Interboro 4, Penn Wood 1 >> Mikayla Kennerly scored twice, and Morgan Reed paired a goal with a helper for the Bucs (1-5).

Westtown 1, Notre Dame 0 >> Caroline O’Keefe made 10 saves, but she was beaten in the second half as Westtown eked out the win.