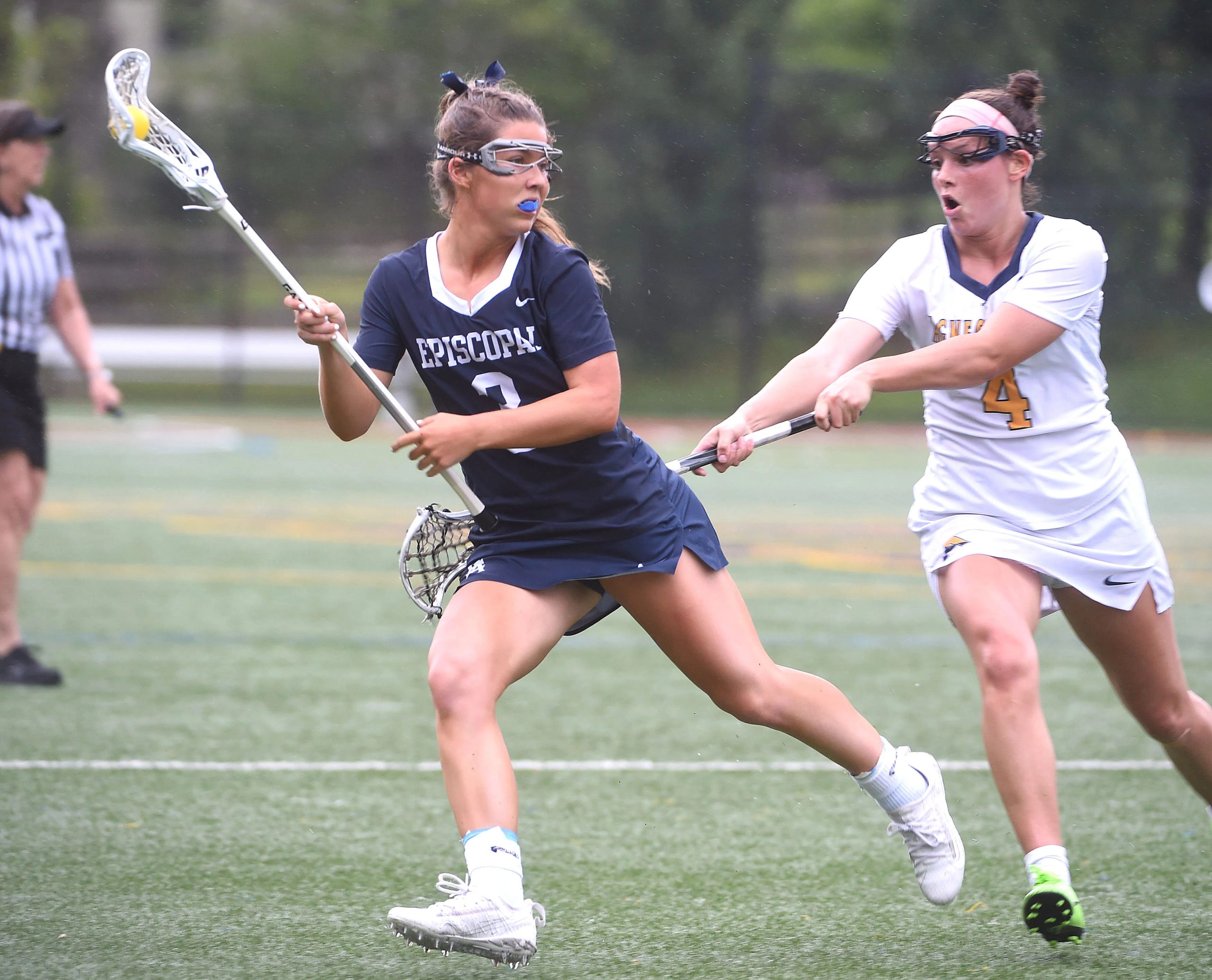 In addition to Player of the Year Kiley Mottice of Archbishop Carroll, the rest of the All-Delco team includes:

Alexa Capozzoli, Episcopal Academy: The senior attacker was at the heart of an EA team that went 19-2 and won the Inter-Ac title. Capozzoli led the Churchwomen in goals (54), assists (30) and points. She was fifth in Delco in assists and tied for eighth in points. For her efforts, she was voted the Inter-Ac player of the year by league coaches. She was the reliable finisher that got EA’s offense where it needed to go. She tallied two goals and five assists in a win over Penn Charter, a hat trick in the season-opening win over Agnes Irwin and five goals and three assists in a victory over Delaware’s Tatnall School. An All-American and academic All-American, she will continue her career at Saint Joseph’s.

Bella Piselli, Episcopal Academy: Piselli and Capozzoli complemented each other in so many ways – Piselli as the speedster to get up and down the field, Capozzoli as the crafty operator and distributor around the cage. The effect was 19 wins and an Inter-Ac title, plus All-America nods for both. Piselli was second to Capozzoli with 49 goals. She added seven assists for 56 points, third most on EA. Piselli scored five goals in beating Notre Dame, four in a tight affair with Germantown Academy and hat tricks against Springside CHA and Agnes Irwin to clinch the Inter-Ac crown. Piselli has signed to play at Villanova. Archbishop Carroll’s (20) Emma Talago passes in the first half of their game against Springfield Thursday. The Patriots went on to win 13-9 to undefeated in the regular season. (PETE BANNAN – DAILY TIMES)

Emma Talago, Archbishop Carroll: Talago’s numbers were down a touch from last year, from 67 points to 65 (37 goals, 28 assists), but numbers are often illusory as the Patriots were blowing out league opponents. And no one watching the state final could doubt the Loyola signee’s credentials. Talago was the best player on the field, almost singlehandedly shifting the balance with her passing ability. She blistered Twin Valley for four goals and three assists in a 10-8 win. Talago had three and three in the season-opening win over Downingtown East, two and one in beating Conestoga and three and one in the Catholic League final, helping the Patriots to their 21st straight league crown. The All-American was fourth on the Patriots in goals and second (to Mottice) in assists and points.

Amelia Reinholt, Radnor: The 2021 PIAA Class 3A champions had to replace most of that squad, yet with senior attacker Reinholt leading the way, they hardly missed a beat. The Raptors made the District 1 Class 3A semifinals and PIAA quarterfinals, losing each time to eventual champ Conestoga. Reinholt was the glue bonding a rebuilt attack, leading with 53 goals, 36 assists and 89 points. She was third in Delco in assists and sixth in points. Reinholt scored five goals and two assists in an overtime loss to Conestoga in March, added five goals in beating Strath Haven and went off for five and five vs. Marple Newtown. She helped the Raptors survive a first-round districts scare by Kennett with three goals and two assists. An Academic All-America, Reinholt has signed to play at Colgate.

Sophie Kingsborough, Garnet Valley: The Jaguars once again made deep inroads to the postseason, and Kingsborough’s finishing was a big part. The senior attacker led the team with 63 goals, 10th most in Delco, and 71 points. She led the Jaguars to a third-place finish in District 1 and the PIAA Class 3A semifinals, losing a one-goal decision to Conestoga. Kingsborough scored four goals in an early win over Springfield and five to outslug Penncrest. She added five goals and an assist in the first round of districts and five goals in the first round of states, plus a hat trick in the three-overtime win over Owen J. Roberts in the PIAA quarters. An All-America and Academic All-America, she’ll continue her career at Furman.

Marissa White, Agnes Irwin: White was the most devastating finisher, pound for pound, in Delaware County. Even as the Owls struggled to stay above .500, White continued to pump home goals at will, her 73 strikes second most in Delco. She paired them with just two assists. White showed she’s all the way back from a knee injury that deprived her of her junior season. She blistered the Benjamin School for eight markers and put six past league foes Germantown Academy, Springside CHA and Notre Dame. In a 9-7 loss to EA in May, she accounted for five goals. An All-America, White will join Mottice with reigning national champions North Carolina. Kaitlyn Stankavage, Garnet Valley: The senior middie was the Jaguars’ engine in the middle of the field, her pure athleticism allowing the rest of a rebuilt attack time to find its roles and footing. Stankavage was third on the Jaguars with 56 goals and second in points with 66, to go with the team’s leader in draw controls and with her two-way midfield play. She scored five goals three times, including the opening round of states against Governor Mifflin. She added five consecutive hat tricks midseason, starting with a loss to Manehim Township, encompassing a win over Radnor and capped by a five-goal outing vs. Penncrest. A two-time All-Delco, Stankavage was voted All-American and Academic All-American this year. She’ll continue her career at Temple.

Mia Valerio, Springfield: The junior midfielder propelled the Cougars to the District 1 Class 3A final, a spot in states and a 16-win season. A three-sport standout who’ll continue her lacrosse career at Richmond, Valerio just has a knack for how to impact sporting contests. She finished second on the Cougars in goals (54) and points (83) and was first in assists (29). She scored six goals against Penncrest, then helped the Cougars orchestrate a 4-2 upset at North Penn with a goal, at Methacton (two goals, assist) and at Garnet Valley in overtime (goal, assist). Valerio had a hand in two of Springfield’s three goals in the district final loss to Conestoga and scored a hat trick as the Cougars were eliminated in the first round of states. Valerio was named an All-America and Academic All-America.

Claire Natoli, Cardinal O’Hara: Voted the Catholic League Player of the Year by coaches, Natoli was a two-way presence for the Lions, who made the league final and PIAA Class 2A quarters. The junior Jacksonville commit tied for fourth on the team with 42 goals and was second with 33 assists. Her 75 points were second-most among the Lions and 12th in Delco. But scoring was only part of what she brought. She led O’Hara in draw controls and groundballs, often marking the opponent’s best middie. Offensively, Natoli topped out at four goals and four assists against Bonner-Prendergast. She added four goals in the PCL semifinal and two goals and an assist in the finals loss to Carroll. Anastasia Ciminera, Cardinal O’Hara: The senior was regarded as one of the best defensive players in the area, earning All-Catholic, All-American and Academic All-America honors. With Ciminera leading an athletic defensive unit, the Lions won 16 games and made the PIAA Class 2A quarterfinals for the second straight year. They also reached the Catholic League final, losing to Archbishop Carroll. O’Hara allowed 6.3 goals per game, outscoring opponents by nearly 200 goals (322-133) on the season. Ciminera was a big part of that. She also scored three goals, including two against Conwell-Egan, and dished three assists. Ciminera will join Stankavage at Temple.

Katie Koroly, Archbishop Carroll: While Mottice, Talago and second-teamer Ava Bleckley got most of the glory in Carroll’s unbeaten season, a 21st consecutive Catholic League title and a second straight state crown wouldn’t have happened without a sturdy defense. Koroly led the way at that thankless position, backstopping a defense that surrendered an average of 4.9 goals per game. They conceded in double figures just once, when they beat District 1 and PIAA Class 3A champion Conestoga. The Patriots allowed 23 goals in four states games. Koroly led that unit, with her low defense and ability to cause turnovers, collect ground balls and motor out of trouble. She added six goals, including two in the Catholic League semifinal vs. Lansdale Catholic. Relatively new to the sport, Koroly will play at Division II Wingate.

Ava Yancey, Strath Haven: Just a sophomore, Yancey is solidifying a reputation as one of the top goalies in the area. She helped Strath Haven, which had to replace its top two players from last year’s run to the PIAA Class 2A final, return to the state semifinal. Despite the gauntlet that is the Central League, the Panthers won 16 games, reaching the District 1 final. Yancey backstopped that effort, melding her natural shot-stopping talent with a more well-rounded and mature game. She made 15 saves in a regular-season loss to eventual state champion Conestoga, 10-6, then made double-digit saves in each of her last four games, from the district final to the state semifinals.