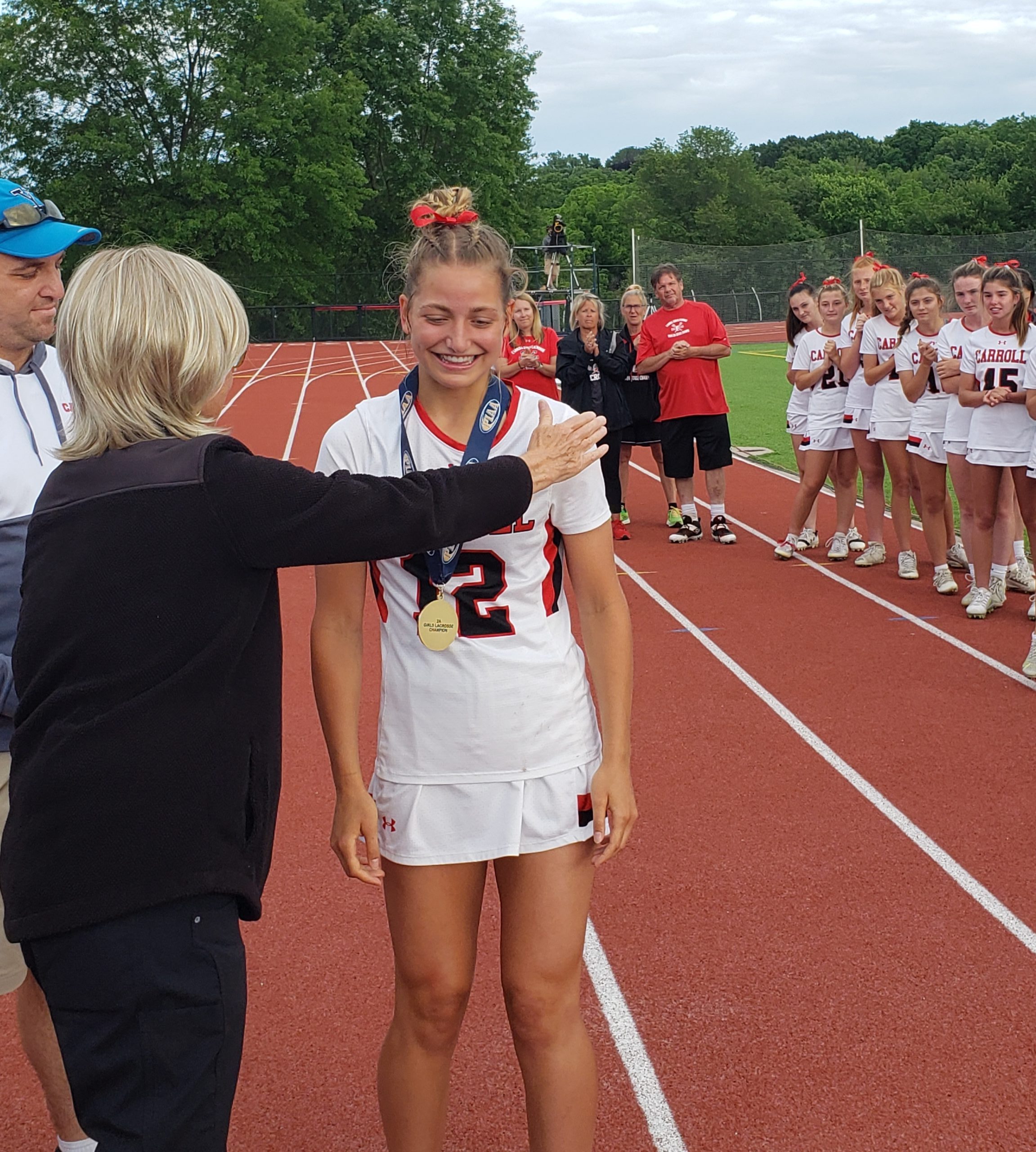 WEST GOSHEN — Brooke Wilson was ready, just in case the plan changed midstream. A three-goal deficit in the first half of the PIAA Class 2A final Saturday … yeah, that qualifies.

Anna Kaplan fueled a fast first half from District 3 champion Twin Valley, the senior middie and coach’s daughter using her speed and sense to create for others. So Archbishop Carroll went to its “aces” package, Wilson denying Kaplan the ball. Hopefully, that would deny the Raiders any offensive edge.

Thirty-plus minutes of defensive frustration later, Wilson and Carroll won the day, a 10-8 decision to cap an unbeaten season and repeat as Class 2A champions.

Wilson channeled her ability on the basketball court, where she was the Patriots’ stopper as a sophomore on the way to the second team All-Delco selection.

“It was literally the same exact thing as playing basketball defense,” Wilson said. “I just had to stay low, keep my feet moving and keep her in front of me.”

Carroll (24-0) had a little inside info on Kaplan: She’s bound for Loyola, where she’ll room with Emma Talago, the Carroll offensive maestro who rampaged to four goals and three assists. The scouting report was clear. If Kaplan gets the ball, that’s bad for Carroll.

So after Twin Valley leapt out to a 6-3 lead with 6:08 left in the first half, Wilson locked off Kaplan, shadowing her and making sure she couldn’t receive passes. Without Kaplan’s guiding hand, the Raiders scored just twice the rest of the way.

“With that, you just have to communicate with the team,” Wilson said. “It’s really not that hard. You have to keep her in front of you, look at her waist.”

Wilson’s assignment may owe to the fact that she’s the only one who would dub it “not that hard.”

Kaplan reinforced the need for the tactic by scoring Twin Valley’s only two second-half goals within 10 seconds. After Carroll went up 7-6, she found a loose ball and buried it. Carroll was whistled for delaying the restart, giving Kaplan the uncontested draw control to bomb to the crease and finish, briefly putting Twin Valley up 8-7, with 17:22 to play.

But Talago answered within a minute, rifling a free-position shot  to knot the game at eight. And Wilson and the Carroll defense quieted Twin Valley from there.

“She did an amazing job,” defensive leader Katie Koroly said of Wilson. “We just linked the two together: The basketball defense is pretty much the same as lacrosse, and she’s an amazing, go-to shut off for Carroll basketball as well. She just went after it, gave it 100 percent and did an awesome job.”

For as tiring as her assignment was, Wilson had no doubt about following Kaplan to the ends of … well, at least Zimmerman Stadium, to finish off a perfect season for Carroll.

“It was definitely one of our hardest comebacks, but it was our last game,” Wilson said. “We knew we had to give it our all in order to win. We’ve been preparing throughout the season for this chance, so we knew we were going to pull through.”