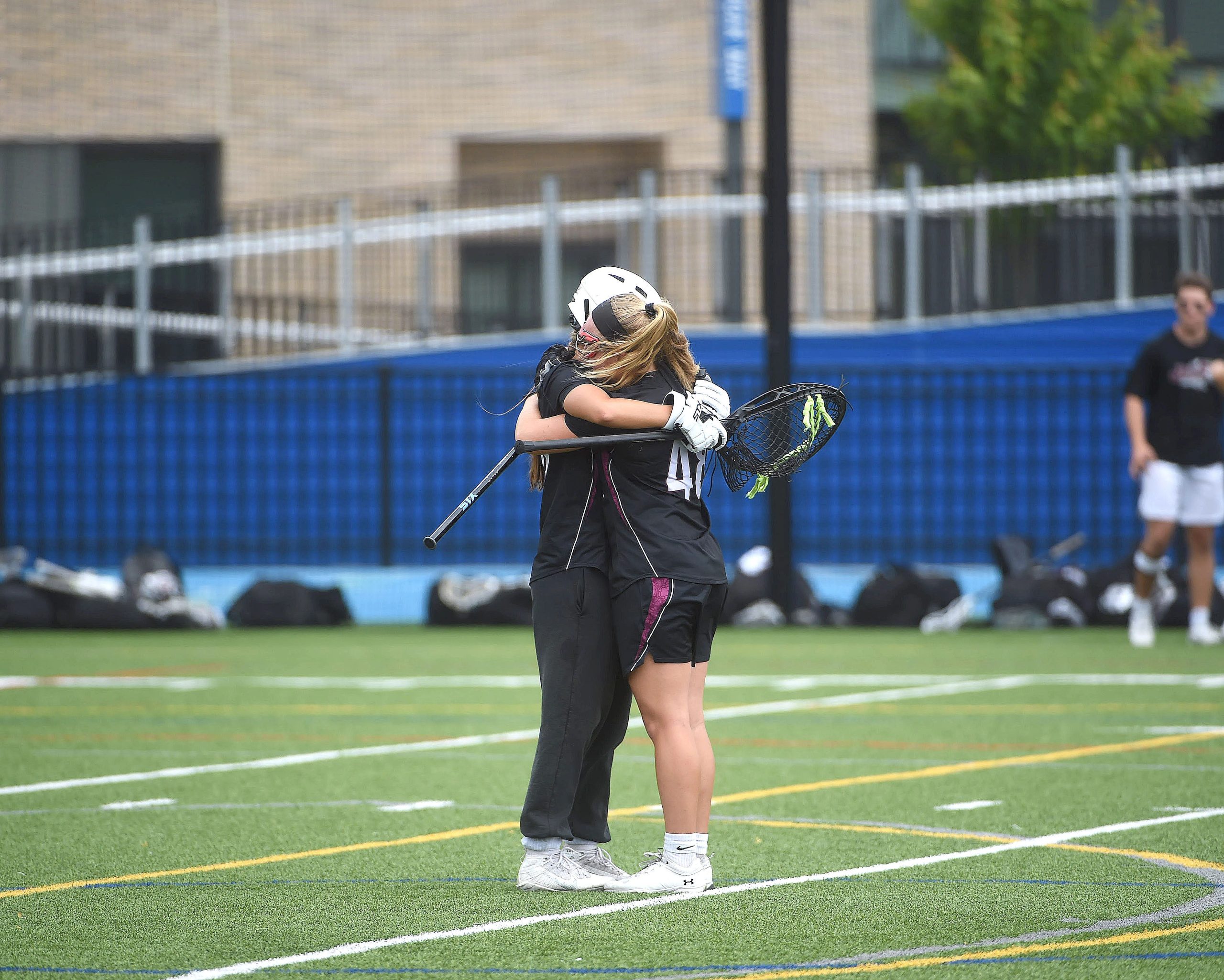 Garnet Valley goalie Mak Butler, left, is embraced by teammate Mia Zelbey Tuesday after the Jaguars fell to Conestoga on a goal in the final seconds of PIAA Class 3A semifinals at Springfield High School. (PETE BANNAN - DAILY TIMES)

It certainly speaks to the growth of girls lacrosse in Pennsylvania. The Philly area teams are great and the rest of the state is catching up.

After Tuesday’s devastating, 8-7 loss to rival Conestoga in the Class 3A semifinals, Garnet Valley coach Jenny Dooley reflected on her team’s success in 2022. The Jaguars finished 12-6 in the regular season — not bad for a GV team, but not great, either. They endured several close defeats, including an 11-9 setback against the Pioneers April 21 and an 8-7 loss to the other PIAA finalist, Manheim Township, two days later.

On the bright side, the Jaguars’ finishing spot in the state tournament was greatly improved, considering they were one-and-done in the last spring with a young team. The 2022 squad showed its mettle, three minutes away from clinching a berth to Saturday’s championship at West Chester East High.

“The second half, or even the last third of our season, was an incredible testament to these kids,” Dooley said. “We had a lot of ups and downs this season. You’d have to double-check my stats, but I think it was something like five or six one-goal games, three overtime games, and a lot of them were heartbreaking losses. We knew the changes we had to make to get ourselves into this position to play in June”

The Jags’ triple-overtime victory over Owen J. Roberts in the quarterfinal round was the highlight of their season. The winning goal was scored by a kid who will be a big part of the program for years to come, sophomore Mia Raucci.

“Saturday was one for the books,” Dooley said. “As much as this wasn’t the finale we were hoping for, I’m so proud to be their coach because they fought that entire game. I told the girls that that was one of the best fights I’ve seen them play because every loose ball, every possible chance that they had to get possession they took and I think that just shows what kind of kids I get to coach and I’m really grateful.”

The Jags and Pioneers exchanged blows like a pair of boxing heavyweights. Neither team led by more than two goals at any point in regulation. While the Jags held a 5-3 advantage in the first half thanks to back-to-back scores from Sophie Kingsborough and Mia Zebley, the Pioneers stormed back to even things up before halftime.

Ava Kane’s goal off a free position put Garnet Valley in front, 7-6, with three minutes to play. The Pioneers won the draw and scored 39 seconds later to tie the game. ‘Stoga’s Chloe Brown won the ensuing draw and eventually scored the winning goal with three seconds to play.

“I was just hoping we could get the draw and hold it on offense,” said Raucci, who netted Garnet’s first goal of the day. “When Ava hit that, I was so excited. I really thought we were going to make it to the next step because usually that’s how it ends. … But Conestoga just took it away.”

Only seven players graduate from this year’s team, including co-captains Kingsborough and Kaitlyn Stankavage.

Garnet Valley will be back. They always are.