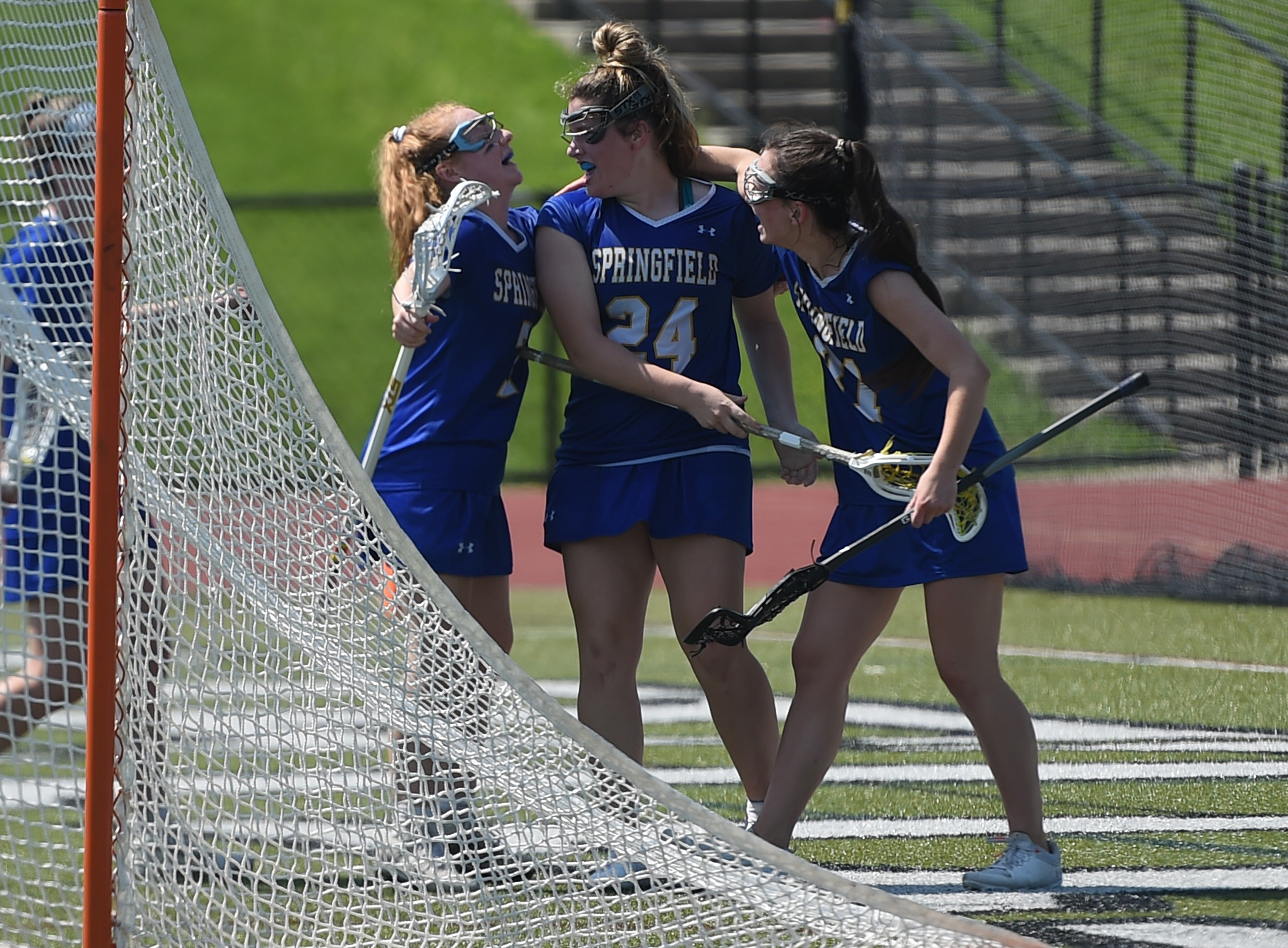 WORCESTER TWP. >> The Springfield-Delco girls lacrosse program is a perennial contender in District 1.

Heading into this postseason, however, the Cougars had very few connections to the team’s last deep postseason run.

Led by four goals from freshman Jaclyn Guille and three goals and an assist from junior Erin DeStefano, the Cougars survived a late Methacton rally for a 13-12 District 1-3A quarterfinal win.

The victory clinched Springfield-Delco a spot in states and the District 1-3A semifinals against league rival Garnet Valley — a 6-5 winner over Owen J. Roberts — on Tuesday. The Warriors head to the playback bracket to face OJR.

“I think we’ve been using these past years as motivation for us,” Springfield junior Mia Valerio said. “We came up short last year in districts. We didn’t make states last year. We really used that this year in practice and in games because we know that we can get there and today showed it. We’re here.”

Senior Gabby Rizzio and Valerio scored two goals and an assist apiece and freshman Maddie Kane added a pair of goals for Springfield, which built a 10-4 lead with 22:14 to play.

Methacton senior Jayme Weber scored five of her game-high six goals to help pull Methacton within one four times in the second half, but a score by Guille with 6:04 proved too much to overcome.

“She had a great second half,” Methacton coach Laurie Markle said of Weber. “We adjusted some stuff. We told the girls, ‘Settle down. Play and run the plays.’ They were nervous. These guys are experienced. They’re in this kind of district playoff all the time we’re not.” The Cougars do have quite a program tradition, winning the Class 2A state championship in 2019 along with seven District 1 titles in coach Keith Broome’s tenure. However, after a COVID-19 year in 2020 and a second-round exit in 2021, there isn’t a whole lot of playoff experience to build off.

“They needed to learn how to win,” Broome said. “Last year, we were in uncharted we were getting blown out by teams, and that’s not happened to us before. These kids had to learn how to beat a good team at the end of the game.”

Guille said the Cougars’ energy level and confidence was high on the bus ride over for the 10 a.m. game. It carried over to the contest as Rizzio and Valerio got Springfield off to a 2-0 lead with 22:21 left in the first half.

The two teams exchanged goals in a back-and-forth first before Rizzio scored with 17.3 seconds left in the half to spot the Cougars an 8-4 lead. DeStefano and Guille added early second-half goals to make it 10-4 less than three minutes into the second half.

“That’s kind of the key with our team, staying together and getting the energy before it even starts and that carries into the game,” Valerio said. “It helped us get a quick lead.”

Weber spearheaded the Methacton comeback charge, scoring 17 seconds after Guille’s goal then reeling off two more in a row to make it 10-7 with 13:52 to play.

Senior Rylie Derrickson scored one of her two second-half goals off a feed from Zhai and Weber added her fourth of the half to cap a five-goal run that pulled the Warriors within one, 10-9, with 12:51 left.

Methacton junior Megan Sanelli, the focus of the Cougars’ defense throughout the game, scored with 9:48 left, but Guille found another answer, giving Springfield a 13-11 lead with 6:04 to play.

“I just knew that we needed the win,” Guille said. “I just saw it and went.” Springfield-Delco’s Jaclyn Guille (12) smiles after scoring what ended up being the game-winner during Saturday’s District 1-3A quarterfinal against Methacton. (Owen McCue – MediaNews Group) The Warriors had to play a man down for the final 5:54 when Sanelli fouled out of the game.

Derrickson’s shorthanded goal with two minutes left gave the Warriors a chance, but DeStefano won the ensuing draw and the Cougars held onto possession until the clock ran down.

“It was going to be whoever had the ball last … with a full team,” Markle said. “Obviously, the yellow cards hurt us. … We were able to turn it over one time, but I didn’t think we were gonna get a second time.”

Sophomore Madison McBride made five saves for Springfield — two of them coming on eight-meter attempts for the Warriors. Senior Mackenzie Clark made six stops for Methacton, which also got goals from senior Delaney Smith and senior Ruby Murray.

Both squads will have familiar opponents in their next matchups.

The Warriors head to the state playback bracket needing a win over league rival Owen J. Roberts, who the Warriors upset in the PAC championship game two weeks ago, to clinch a spot in states.

Springfield-Delco lost to Garnet Valley 13-9 in an early-season Central League showdown on March 31.

“We lost to them in the beginning of the season,” DeStefano said. “We played a good first half, but we kind of struggled in the second half and the next time will be different.”

The Springfield-Garnet Valley showdown is half of an all-Central League District 1-3A semifinals. No. 1 Conestoga and No. 4 Radnor match up on the other side of the bracket.

“The Central League is the best league,” Broome said. “It shows every year.”