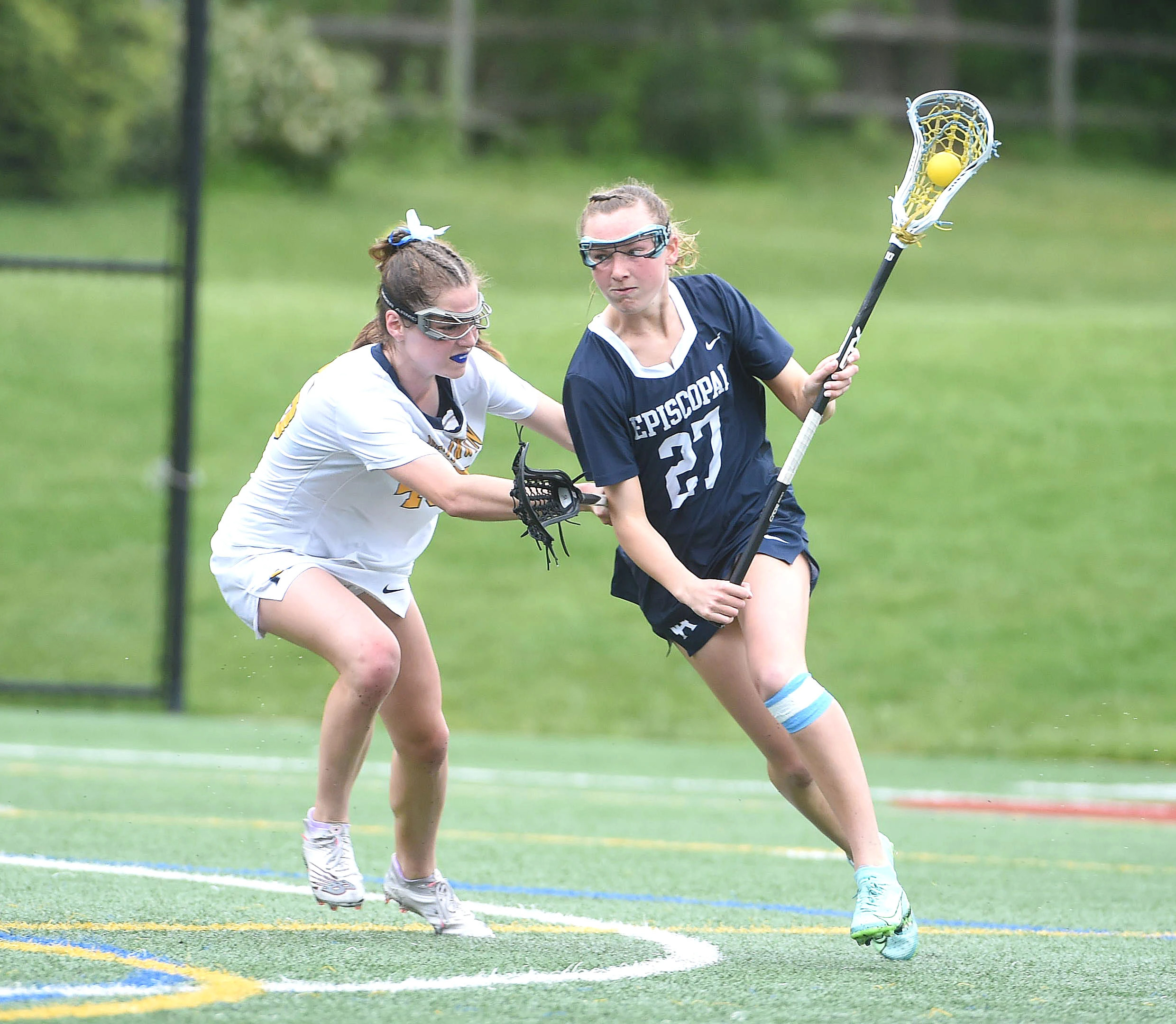 RADNOR — Grace Holland doesn’t look like a freshman on the lacrosse field. She doesn’t sound like one in dissecting a game, either. And after most of a season backstopping Episcopal Academy’s lacrosse team, with its slate of copious top-ranked challenges, she isn’t really a freshman anymore.

Holland is, however, a game-changer, as Agnes Irwin found out Friday in an early installment of what could be many frustrating afternoons against her.

Holland stopped seven shots, including four eight-meter attempts, to preserve Episcopal’s first-half lead on the way to a 9-7 win over its Inter-Ac rivals. With two games left in the regular season, EA (15-2, 9-1) clinches at least a share of the league title. Agnes Irwin (9-7, 7-3) drops into a pack of three teams with three losses each. That includes Springside Chestnut Hill, which had knocked off EA; the Churchwomen duly paid that back with a 19-7 thumping Tuesday.

Friday, with a first title since 2019 on the line, EA leapt out to a 7-3 lead at half and went up 9-4 six minutes into the second. That was enough for Holland, even if things got a little hairy late.

“It’s definitely nerve-wracking, but we’ve been here before vs. a lot of teams,” Holland said. “We’ve seen them come back when we’ve had a lead, but we had to keep playing our game the whole entire time, and I think we did that. Even though we were nervous, we had faith in ourselves that we could win and we were able to hold (them) off. Even though it definitely got a little close for comfort.”

Holland was excellent from her first stop, which was telling in two ways. First, because it was a great low denial of a Caroline Chisolm from eight meters. Second, because that first save came with EA already up 5-1 and more than 12 minutes off the clock.

Holland would gobble up low shots again and again, and the specter of her covering low corners led to Agnes Irwin shooters missing high or wide, including a pair of free-position shots off the iron.

“She’s incredible: A freshman able to make big saves against great players,” midfielder Quinn Whitaker said. “She stayed calm at all times and just played as she knew how to. We had faith in her.”

Holland worked hand in glove with the defense. Agnes Irwin had only nine shots in the first half, all three goals coming from Marissa White. The North Carolina signee scored five times, but she had to work for everything she got in the teeth of an EA zone that effectively clogged the middle.

With active sticks in the arc to bat away passes and the athleticism of defenders like Whitaker, Avery Le, Grace McHugh, Jenna Morley, Franny Gallagher and Lainey McGonagle, the shots that got to Holland were generally those she wanted to see.

“We knew we had to clog the middle and know where Marissa was at all times,” Whitaker said. “She’s a very good player, and there are other threats too, and we had to communicate, help each other out, know we had each other’s backs so we could take risks and get those turnovers.”

“We thought our ball movement was really important, to get them to move and shift and then attack the back side,” White said. “I think we did have a lot of good opportunities and shooting spaces, but they’re really good at their zone, they slide well and we had a hard time breaking it today. And the times we did, we got a lot of good shots off.”

Holland denied a Katie Repp eight-meter shot early in the second half, then shouldered away a free-position effort from Mariyn Dwyer with eight minutes to go, part of 12-plus minutes without a goal for either team. She also denied an effort by Cate Parsells, who had gotten the game to 9-7 with less than three minutes to play, in the final minute to preserve some cushion. Whitaker followed with a caused turnover, groundball and drew a yellow card, Agnes Irwin’s fifth, to burn out the clock.

Whitaker and EA had the edge in timely offense, too. White’s third goal got Agnes Irwin to 5-3 with 6:21 left in the first half. Bella Piselli scooped the ensuing draw and bee-lined to score eight seconds later. She finished with three goals.

Whitaker also scored three times, one off an eight-meter shot with two seconds left in the half. The midfielder took two quick steps and rifled a high shot that goalie Maggie Mullen stood no chance on.

“I usually don’t shoot like that,” Whitaker said. “But two seconds left, I knew I needed to get the goal. So I shot it.”

Whitaker also scored the first goal of the second half, a sweep across the arc to bury a shot. Lex Ventresca paired two goals with an assist for EA.

Those clutch contributions solidified a fact that EA had known all season – the Churchwomen are championship caliber. Any season without a title (save for a pandemic-wiped 2020) has become an anomaly. Friday’s triumph restored normalcy to the Inter-Ac power balance, in EA’s collective eyes.

“I know we’re a great team,” Whitaker said. “We can pull it out. They’re a great team, so we know it’s going to be tough. But if we play together and show grit, we can win.”

Springside Chestnut Hill 12, Notre Dame 6 >> Katie Onderdonk, Kylee O’Donnell and Anya Dunn scored twice each, O’Donnell adding an assist, but it was all uphill for the Irish after an 8-2 deficit in the first half.