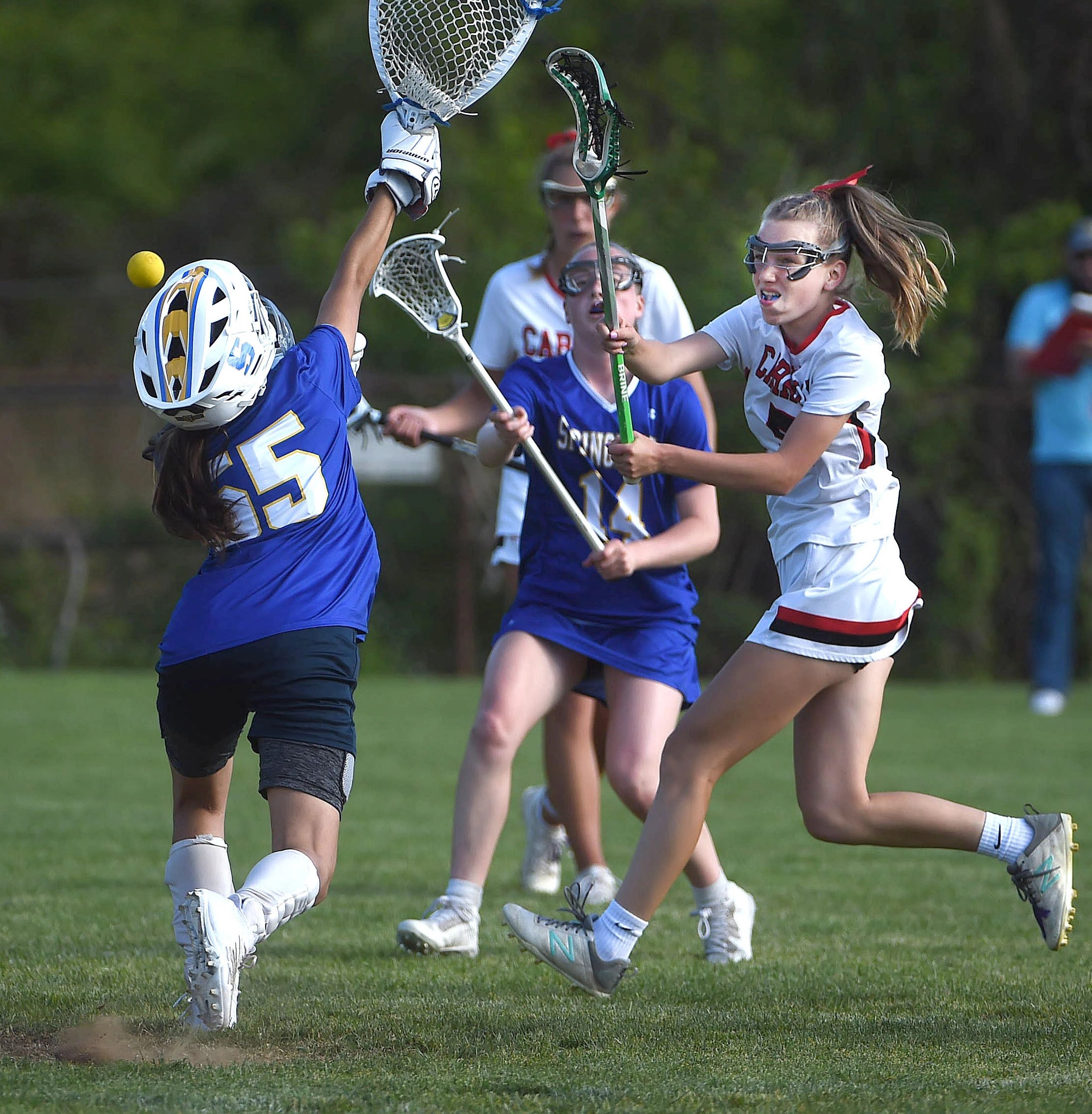 RADNOR — In the long and storied history of Lorraine Beers’ leadership of Archbishop Carroll’s girls lacrosse programs, there are still firsts out there to be achieved.

Thursday, a special one got checked off.

Carroll handled Springfield, 13-9, in the nonleague season finale for both teams, allowing Carroll to finish with an 18-0 record, the first unbeaten regular season for Beers at the Southeastern PA powerhouse.

The distinction comes without caveats. For however head-and-shoulders Carroll is above the rest of a Catholic League over which it is the 20-time reigning champion (262 consecutive wins and counting), the Patriots have courted all manner of nonleague challenges.

Carroll has eked out one-goal wins at Garnet Valley and Conestoga. It bested a trio of Inter-Ac teams. It throttled Radnor by 12 goals, coupled with beating Notre Dame and Agnes Irwin to claim the unofficial greater Radnor championship. And it’s fitting that it culminated with a rematch of the 2019 PIAA Class 2A championship game, since last year’s state final win over Strath Haven scratched off the biggest omission on the program’s resume.

The last miles were among the hardest: Carroll found itself tied at 8 late in Tuesday’s game with Penn Charter, holding on for a 10-9 win. Followed by a quick turnaround to take on the Cougars, it was a trying week.

“I think we were honestly pretty drained after Penn Charter,” senior attacker Emma Talago said. “It took everything out of us. It was so much excitement. But we wanted this win more than anything, to finish out the season undefeated, which has never been done for us. We wanted that, mostly for Beers.”

The Patriots took control early Thursday to make it a relatively comfortable capper. They struggled early, Springfield swarming defensively to keep explosive scorers out of dangerous areas. That left Carroll with just a 5-3 lead after the first of four Claire Lynch goals at 10:47 of the first.

But Carroll adjusted, and by monopolizing possession, it pulled away. When Talago, the Loyola commit who dished three assists, set up Brooke Hippert for a goal at 17:14 of the second, the edge stretched to 12-3. It was built by keeping Springfield off the board for 21 minutes and 16 seconds.

“I think we’ve been working on a couple of different offenses, just from facing different teams and now that we’re at the end of our season,” Talago said. “I think it’s easy for us to adjust, and we work really well as a team, so it’s easy just to work the ball and work into different things.”

“We came in knowing that it’s obviously a really good team, they’re ranked in the nation and everything like that,” the midfielder Lynch said. “We came in and we knew what we had to do. … I think we did really good defensively crashing in on them and forcing a bad pass or a bad shot that then our goalies could make the save.”

Carroll had an 16-8 edge in draw controls, Machaela Henry leading with five and Ava Bleckley and Kiley Mottice four each. Bleckley scored four goals, Henry had a hat trick and Mottice and Catie McConaghy scored twice each.

Defensively, the combination of Brooke Wilson and Chloe Bleckley effectively shut off Mia Valerio, who scored a goal but barely touched the ball in the first half. That, plus five saves from Bridget Robinson, helped open space for the Patriots to pull away.

“When they shut her off, it’s hard for the first few plays,” Lynch said. “Then you just have to adjust and figure out how other people are going to score or do something for our attack.”

Lynch got going eventually, using her speed and short stature so snap off shots low to get past Robinson. Erin DeStefano scored twice, and Maddie McBride made five saves in manning the second half.

But that wasn’t enough for Springfield to climb out of a hole. They got within 13-9 with 2:13 left then won the draw, but Carroll forced a turnover to run out the clock.

There wasn’t much in the way of celebration for the Patriots, short of a unique recognition of what the game meant. Talago said that something about this group has been special all year, so while an undefeated regular season wasn’t the explicit goal from the start, it was one they turned their attention to once the wins started ticking into the double digits.

But it’s only one stop. And with a vastly improved Cardinal O’Hara in the Catholic League and the PIAA Class 2A field awaiting, there’s more to be done before they celebrate.

“It’s definitely up there,” Talago said. “It’s not something that’s always on our mind, but once we started off so strong this season, it kind of just fell together. I think state ‘chip is obviously the end goal, and PCL is coming up soon, so those are our next goals.”