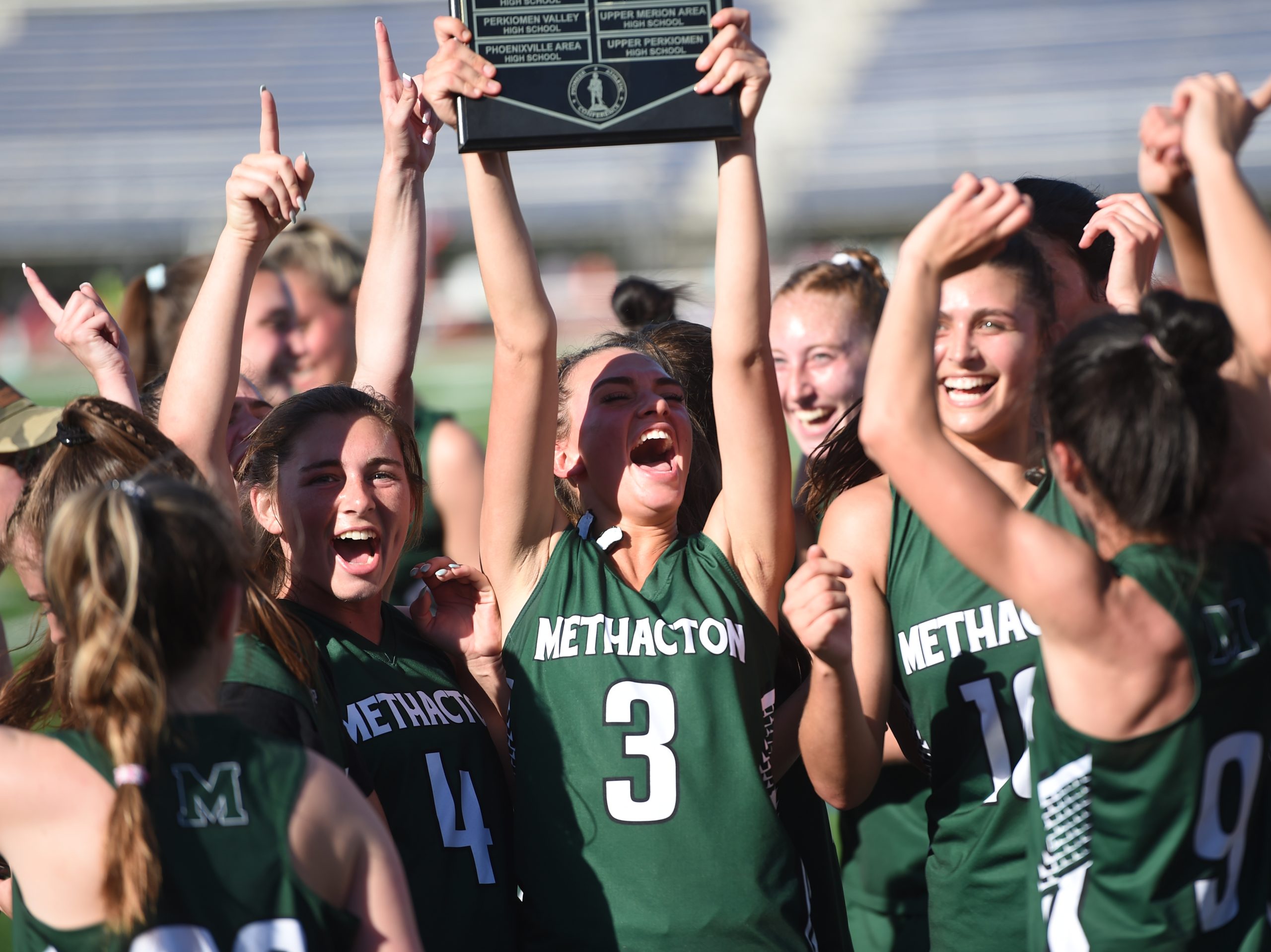 KING OF PRUSSIA >> There weren’t too many true believers in the Methacton girls lacrosse team.

Heading into Thursday’s championship against undefeated Owen J. Roberts, even some of their classmates verbalized their doubts.

“People at school said we were going to lose,” Methacton junior Michelle Zhai said. “No one came to support us, which really sucked … but we really wanted to prove people wrong.”

There was reason for doubt.

But Methacton had a plan. Then executed it perfectly.

The Warriors jumped ahead early. They played smart and patient. Sprinkle in some terrific individual performances and a few lucky breaks and the result was an 8-5 win over the Wildcats for an all-time upset and the program’s first PAC championship.

“We walked into school today and we’d see each other in the hallway and we were like, ‘This is our game. This is our game. We’re winning,’” Methacton senior Delaney Smith said. “There were no ifs, ands or buts about it. We walked on the field with our heads held high. We were going to come out and we were going to play strong and give it our all. We knew we could do it.”

Methacton scored twice in the first seven and a half minutes. The Wildcats responded within 30 seconds both times to tie the score 2-2 with 16:59 left in the first half.

Megan Sanelli scored her second goal to put Methacton up 3-2 then 17 seconds later Jayme Weber netted her second for a 4-2 Methacton lead with 11:56 left in the first half.

Zhai added a goal as the Warriors held a 5-2 advantage at the break.

“We played really smart in this game,” Smith said. “Our strategy was we knew Owen J. plays really fast, so we came out and wanted to hold the ball as long as we can and wait for that smart shot, which is what we did.”

“If we have the ball then they don’t,” Zhai said.

The Wildcats appeared ready to make a push early in the second half when Alexa Vogelman pulled the Wildcats within two twice.

Both times, however, the Warriors found an answer. The deficit never got to one.

The Wildcats outscored opponents 304-41 during the regular season and were in unfamiliar territory playing from behind for most of the game.

Methacton’s lengthy possessions limited OJR’s opportunities, and Methacton senior goalie Mackenzie Clark — who coach Laurie Markle said “played the game of her life” — stopped 12 shots when they did get their looks.

“They (Methacton) played incredibly well,” Owen J. Roberts coach David Schlesinger said. “Their approach to the game was much different than what we had seen before, so give credit to Coach Markle for coming up with a strategy that worked. They were patient.”

The Wildcats’ comeback bid became even tougher when Koury got her second yellow card with 18:12 left in the game, forcing OJR to play without its top scorer for the rest of the game.

“When one of our top players gets knocked out of the game for two questionable yellow cards, it happens,” Schlesinger said. “She does so much for us it’s hard to replace that.”

Markle said things broke right for the Warriors and there were a number of individual efforts that propelled the win. Along with Weber, Sanelli and Zhai on offense, senior Marissa Tommarello, sophomore Lily DeWan and junior Elise DeWan were among the standouts on defense in front of Clark, who recorded her 500th career save in the game.

“They really did (believe),” Markle said. “We had a game plan, and I’m going to say they executed it beautifully. … We had some lucky breaks. The ball bounced our way a number of times, and Mackenzie Clark played out of her mind.

“A lot of people had really good games and they just were determined. I don’t know how else we won because they’re (OJR) a great team.”

Methacton won just 2-of-23 draw controls in the April 27 matchup, but Elise DeWan was an X-factor in the faceoff circle Thursday to even the possession battle.

“That was one of our big things going into this game because Gabbi (Koury) is really, really good at it,” DeWan said. “I kind of got thrown into it in the middle of the season. Trying to outsmart them is easier for me because I’m not as good up in the air. Trying to place it where my teammates are was super beneficial.”

The Wildcats will have to regroup, but there is still plenty ahead. OJR is the No. 2 team in the District  1-3A power rankings and will be one of the favorites in the tournament — even with a blemish on their record.

“It’s just one game,” Schlesinger said. “It’s a game we wanted. One of our goals for the year is to be PAC champions and it didn’t happen, but the season’s not over. We’ll be the second seed in districts. We learn from this, we move forward, and we play better. And we go after a district title and hopefully a state title.”

Methacton had four previous title game experiences prior to Thursday night. The last two in 2015 and 2016 ended in one-goal losses to the Wildcats. The victories started a stretch of six straight PAC championships for OJR before Thursday’s loss.

The Warriors were happy exact some long-waited revenge in an underdog role .

NOTES >> The PAC title was the first for Markle in her 16 seasons as the Warriors head coach. Smith noted this year’s senior group had a special bond with Markle. They said, ‘Do it for Markle,’ in player huddles throughout the game.“She loves and she puts in everything for us, and we needed to win for her,” Weber said.