Senior Day one for the memory banks for Agnes Irwin lacrosse 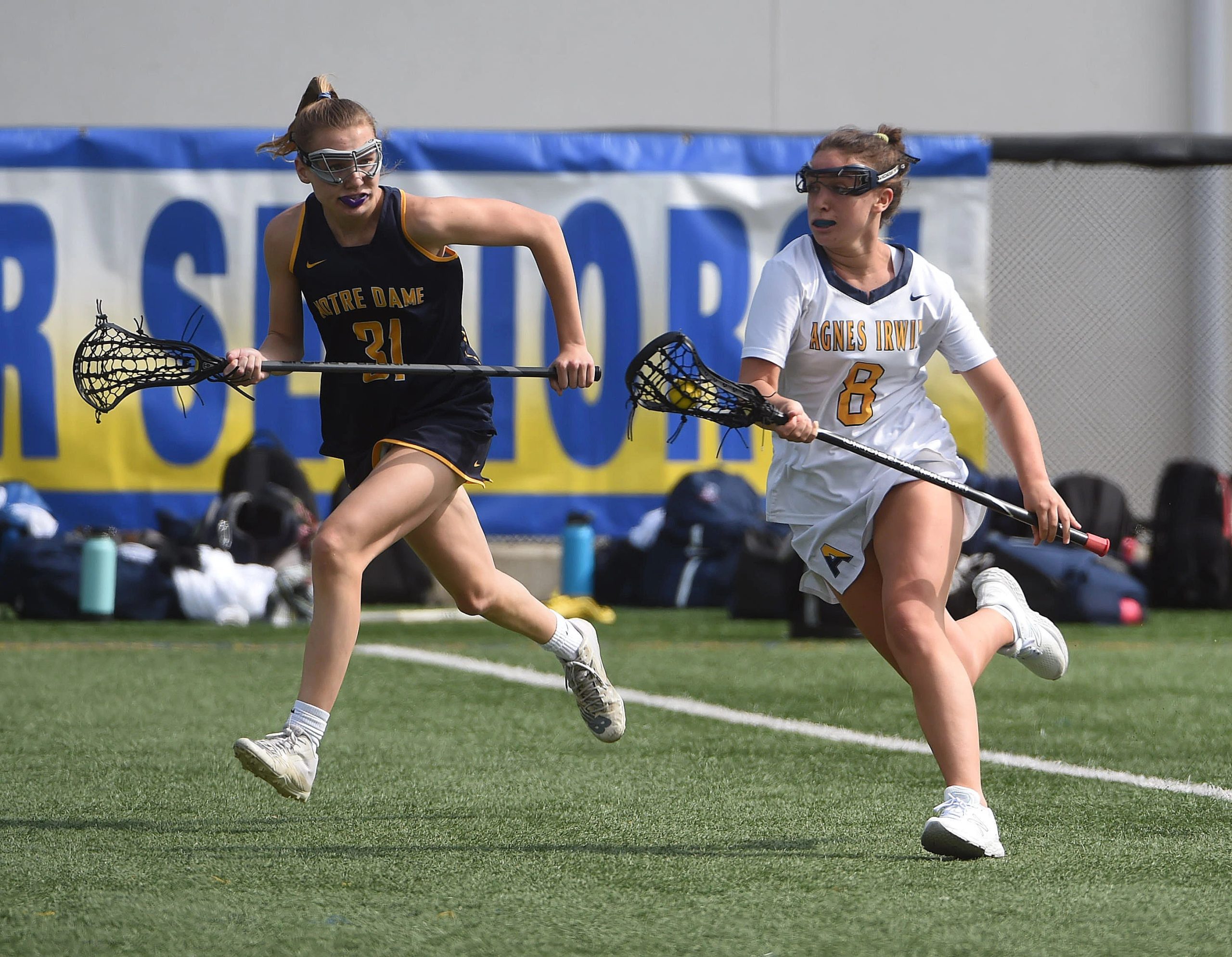 The Inter-Ac lacrosse championship celebration last spring and the indescribable camaraderie of playing together for more than a decade in some cases caught up to the seniors at Phelps Field.

The Owls upperclasswomen barely had finished making the pre-game ceremony walk with family members when they jumped ahead of underclass-heavy Academy of Notre Dame by 10 goals on the way to a 15-8 league victory.

Carly and Sydney Wilson were happy to lineup on the field for Senior Day Tuesday at Agnes Irwin. (Staff photo)

The spark came from a compassionate gesture to begin the game. Star middie Carly Wilson, out of action due to a torn ACL, received permission to suit up and participate in the opening draw. With the blessing of the Irish, she collected the ball off the ground, passed it to twin sister Sydney and exited to cheers.

“Oh my gosh, it meant everything just to be out there with my teammates again,” Carly Wilson said. “It was just super special and I’m really happy I got to do it. It’s definitely been tough watching my teammates play and I’m super proud of them. It was fun just to get out there again, even if it was just for a few seconds.”

The Wilsons are headed to the University of Florida on lacrosse scholarships, both having earned All-American status last year. They’ll take a part of the Agnes Irwin program with them as will the other 10 seniors on the team.

“It’s bittersweet,” coach Lauren Wray said. “They’re a great group. There’s so many of them and they’re going separate places next year. I just really appreciate each and every one of them.”

White led the Owls (7-6, 5-2) with six goals on dazzling spin-moves and accurate shots. Ernst, Hark and Alex Lesko help shore up the back end for goalies Maggie Mullen (sophomore) and Rowan Pauzano (freshman).

“We love being together,” Ernst said. “We love understanding how to make each other the best players we can be.”

Hark helped recruit players like Ernst dating back to elementary school. It’s been a great ride, and now the Owls would like nothing better than to win back-to-back league titles.

“Last year winning the championship was a big moment I’ll never forget,” Hark said. “Hugging Cate, Katherine, Alex, Colby (Macaione) and all the seniors is a great memory. Playing with them this year keeps the memory in my head.”

The Wilsons always will be grateful for one last chance to suit up together for the Owls. Carly says the knee feels great, that she’s been jogging for a couple of weeks. Sydney says that even though they’ll compete together at Florida, they didn’t want to let this Senior Day pass.

“Her thing last year was getting all of our controls,” Sydney Wilson said of her sister. “So, I think it was like get one final draw control for Agnes Irwin. It was really special. And for me to be able to get the pass from her right after it was even more special.”

Episcopal Academy 12, Penn Charter 11 >> Alexa Capozzoli’s second goal of the game was the difference for the Churchwomen. She also had five assists, two draw controls and two ground balls.