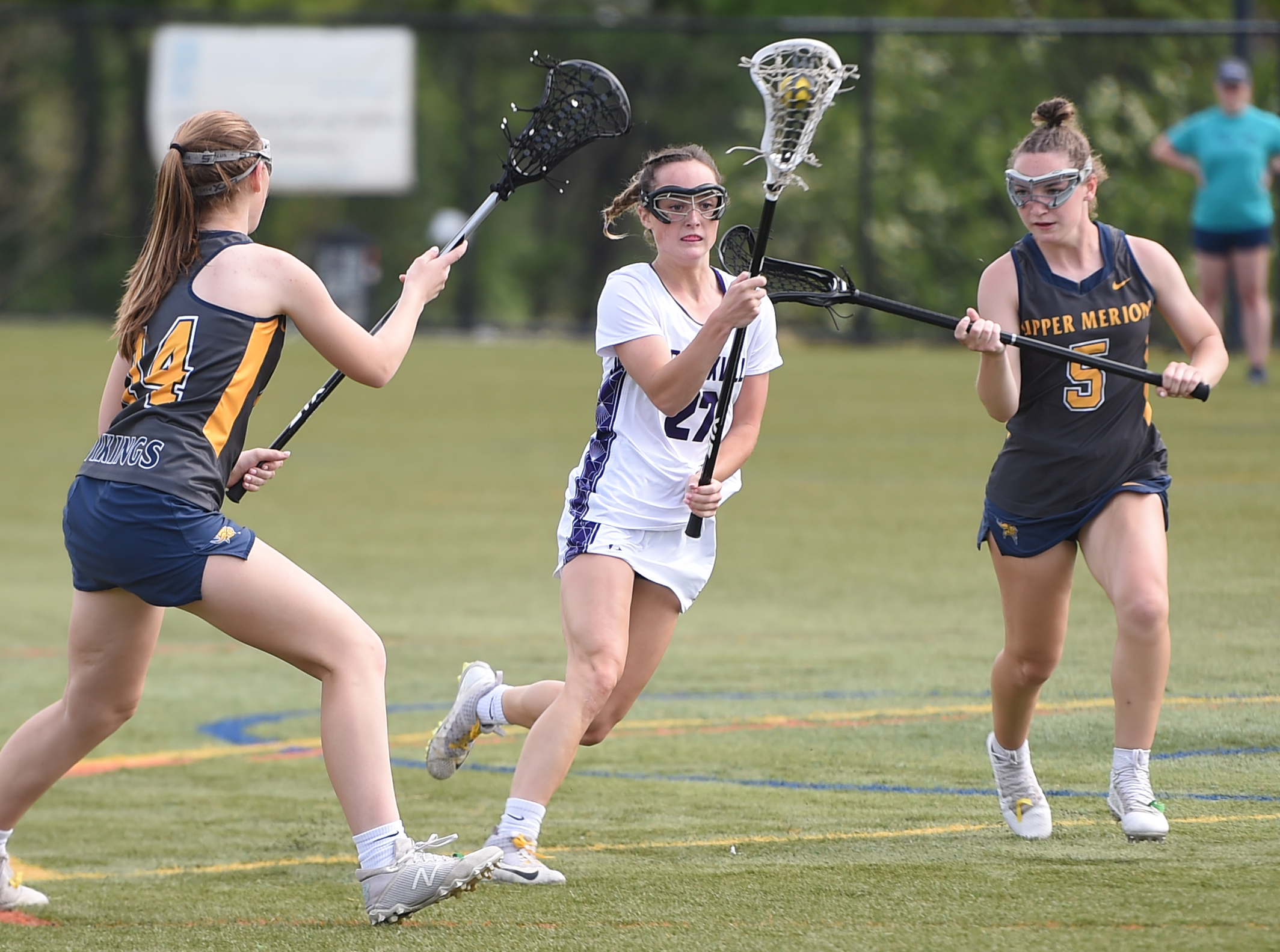 The first was to clinch a Frontier Division title with a win over Upper Merion. The second was to get junior Jaime Michaud to the 100-goal milestone.

The Phantoms rode Michaud’s five goals, including No. 100,  to a 7-5 victory over the Vikings, clinching the program’s first Frontier Division title since 2015.

“That was very special and it was getting nerve wracking there towards the end, but I’m really excited and thankful for my teammates who let me have that opportunity,” Michaud said.

.@PASDPhantoms junior Jaime Michaud and senior Gianna Thaxton after Michaud scored her 100the career goal and Phoenixville clinched its first Frontier title since 2015 with Tuesday’s win over Upper Merion. pic.twitter.com/gGwpEKCtbF

Junior Kira O’Donnell and senior Gianna Thaxton opened Phoenixville’s (13-5 overall, 8-1 Frontier) scoring Tuesday but it was all Michaud after that.

The junior scored four first-half goals to put the Phantoms up 6-1 with 4:49 left in the first half. Upper Merion (7-7, 7-2)  junior Audrey Schuebel made it 6-2 before halftime, and classmate Julianna Callison tallied one of her team-high three goals early in the second half to make it 6-3 with less than 21 minutes to play.

Michaud found the answer a few minutes later at the 15:27 mark to reach the 100-goal milestone and give her team a four-goal cushion to protect the rest of the game.

Phoenixville knocked off Upper Merion 9-8 in overtime in the teams’ first meeting April 11, so both squads expected another battle Tuesday with the division crown up in the air.

After a slow offensive start, the Vikings put the pressure on late. Junior Ashley Evitts scored with 7:38 left off a feed from Brooke Olsen. Callison scored her third with 2:41 to play to make it 7-5.

Callison nearly pulled UM within one with 40 seconds to go, but Phoenixville senior goalie Maddy Schramm made a save and freshman Dani Eliasson scooped the ground ball before the Phantoms wound down the final seconds of the clock on the other end of the field.

“We have the tendency to panic a little bit and lose our composure, and I was just telling the team that we had maybe a five-minute span with just too many turnovers, but really other than that we played a pretty solid game,” Upper Merion coach Angie Yanocha said. “We caused a lot of their turnovers, came up with some really good ground balls, had some nice goals, and held them to one goal in the second half. We just ran out of time unfortunately.”

Phoenixville and Upper Merion both came into 2022 needing to replace key pieces from the previous season.

Yanocha wasn’t sure what to expect out of her group heading into this season after losing about half of last year’s Frontier champion roster. The inexperienced Vikings still came within one win of repeating as division champions.

Upper Merion will miss out on the PAC postseason and appears to be on the outside looking in on the District 1 postseason, sitting at No. 31 with four games left.

Still, with a strong junior core returning next year, Yanocha has plenty to build on heading into next season.

“I knew it would take time, and we’ve come a long way from where we started,” Yanocha said. “We just knew we had to build that team chemistry and I think we’re starting to figure things out, which is why we’ve been able to be competitive in so many of these games.”

“It’s definitely a disappointing loss but I’m proud of how we played,” she added.

Thaxton and Michaud said the emergence of O’Donnell and Eliasson this season were both important developments in the Phantoms turning into Frontier Division champs.

Phoenixville coach Aamina Thornton noted her squad has had to rely on a lot of young players playing beyond their years, particularly when the Phantoms were short handed over spring break.

The group gelled together and supported one another. Now, they are playing well at the right time of the season.

“It did take some time,” Michaud said. “We started out a little slow I would say, and we started to gel as the season went on.”

“We were able to work together well because we started to figure out how each other played and just supporting each other.”

Thornton said what makes her squad different is that they like ‘a dog with a bone.’ They are a group that is tough, works hard and works together.

The Phantoms will likely be underdogs when they reach the postseason, but that is something Thaxton said she embraces.

“You can’t coach and teach heart,” Thaxton said. “That’s something that Phoenixville has. We have a lot of heart here. We always have. Win or lose we got to the next game 1,000 times better.