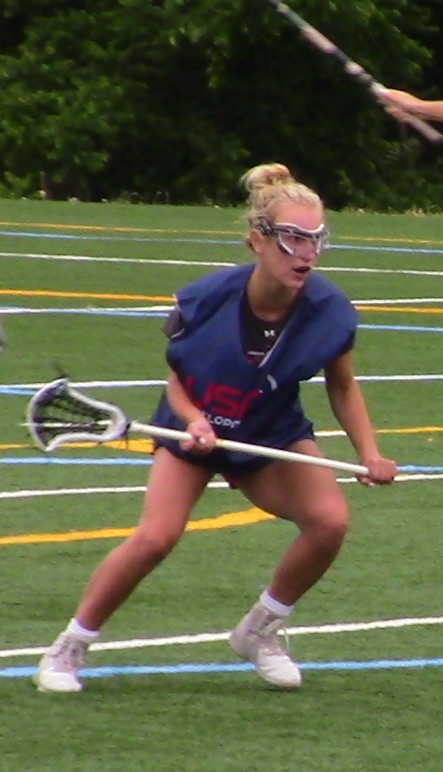 The senior midfielder played for the NIKE American Select Pennsylvania 2022 team in Delaware at the end of July. After that, she competed at the U-18 USA National Team Combine in Maryland in the middle of August.

“Indeed I was facing some very talented girls from all over the country,” she said, “but it’s also nice because most of them are my friends. The Nike American select event was super fun! I ended up meeting up with some of the girls I played against at the Nike tournament again at the U-18 USA National Team Combine. It was enjoyable to play with some of them in drills/scrimmages instead of against them. From both of these events I met amazing, talented players from all over the US and created memorable moments!”

Hobson and her team reached the semifinals at the NIKE American Select event.

“Once again, the Nike American Select event was amazing,” she said. “I got to play with my lacrosse friends that are not on my club or school teams. It’s crazy how much chemistry we had while playing even though we never all played together as a team before. Individually, I put 110% into my play. We made it to the semifinals, but, unfortunately, lost to Massachusetts.”

More than 1,600 girls tried out for the U-18 National Team and Hobson was one of 76 invited to participate in the combine.

“The National Team Combine was an unforgettable experience,” Hobson said. “I had the best time and made so many new, talented friends!

“I’m extremely honored. It’s nice knowing that the last five or so years I’ve been playing the sport has paid off and led me to have amazing and unforgettable opportunities!”

Hobson started playing lacrosse in seventh grade and quickly made an impact. As a freshman, she was a starting defender for the Trojans. After her sophomore year was lost to the pandemic, she started in the midfield as a junior.

“I’m definitely always learning new skills, foot work, shots and more,” she said. “There’s always room to learn and improve. Also, the game is constantly changing with its growing popularity and rule changes. Most of the girls I’ve played against this summer and during my whole lacrosse career have been playing since they can remember. My passion for the sport allowed me to improve and grow in a short span of time to be able to get to the next level.”

She was a first-team All-Suburban One League American Conference selection for the Trojans as a junior last spring. She led the undefeated league champs with 22 assists and finished third with 50 points. She also led the team in shooting percentage, caused turnovers, groundballs and fewest turnovers.

Hobson was named to the 2021 PASLA All-Academic Team. She has a 4.71 weighted GPA and is keeping her options open for after high school.

“For now I’m applying to colleges and playing it by ear,” she said. “If the opportunity presents itself at a university that I believe is my best fit then definitely will consider. However, at the moment I’m hyper focused on my academics.”

This fall, Hobson was invited to guest play with a team in Long Island, N.Y.