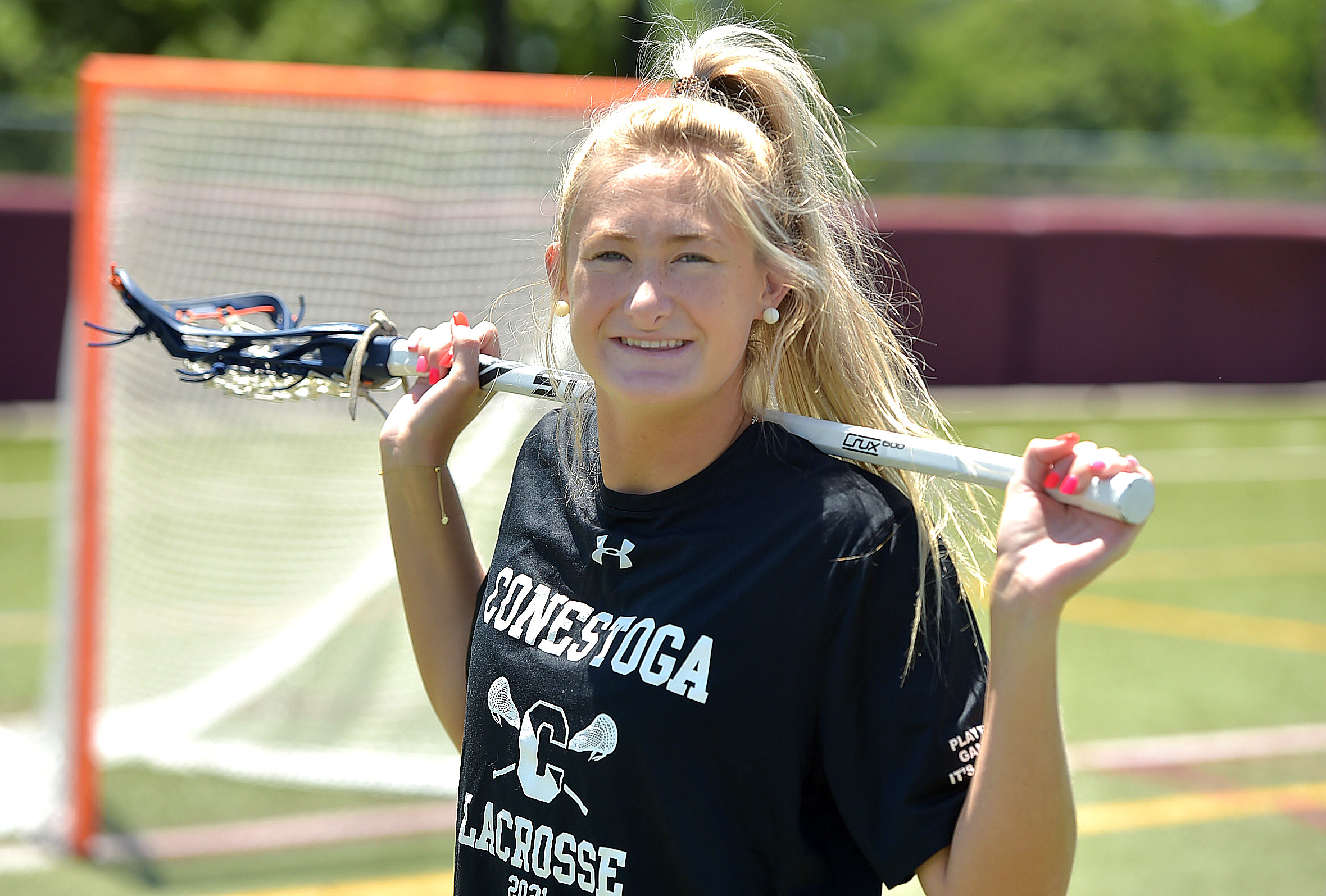 The Conestoga girls’ lacrosse team advanced to the PIAA 3A state semifinals this spring, and leading the charge was All-American senior attack Rachel Clark, the 2021 Daily Local News Girls Lacrosse Player of the Year.

“Rachel is one of the most dedicated and hard-working players I have ever coached,” said Conestoga girls’ lacrosse head coach Amy Orcutt. “She has an incredibly quick first step and her ability to change direction on point makes her difficult to defend. Rachel’s quick hands, quick release and insanely accurate shot make it hard for any goalie to see the ball coming out of her stick.”

As a sophomore, Clark was a first team All-American as Conestoga won the District 1 3A championship. This spring, Clark scored 90 goals and won 107 draw controls, as the Pioneers posted a 15-0-1 record during the regular season.

Conestoga suffered its first loss of the 2021 season in the District 1 3A semifinals, a 13-9 defeat to Unionville despite four goals from Clark. The two teams met again in the state quarterfinals, and this time, the Pioneers came out ahead, 17-6, with Clark earning a hat trick in the first half and controlling the draw.

“My favorite memory of the 2021 season was definitely the state quarterfinal win against Unionville,” said Clark. “That game was just so fun because we were playing so well, and we worked so hard in practice leading up to that game because we wanted revenge.”

As one of the team captains of the young Conestoga girls lacrosse squad this spring – a team that had not played a game since 2019 – Clark tried to focus on developing team chemistry during the preseason. She enjoyed watching the Pioneers’ offense come together during the PIAA 3A state tourney.

“Our team chemistry was a huge factor in getting to the state semifinal,” said Clark. “The main reason we struggled [against Unionville] in Districts was because our attacking chemistry was not there. We were not working together and moving the ball fast enough in the attack. We played our best when we were sharing the ball and running our plays smoothly.”

Clark enjoyed much success with the draw control this spring, which she credits to working in tandem with sophomore sensation Kate Galica, a three-sport athlete for the Pioneers.

“I would normally take the draw, Kate would line up on the attacking side of the circle, and my goal usually would be to push it to the outside of her or in her direction,” said Clark. “Because of her height and great reach, if I get the ball in her direction high in the air, she can usually grab it.”

Clark’s exemplary work ethic, as noted by Orcutt, certainly came in handy during the COVID-19 pandemic, which cancelled her junior lacrosse season at Conestoga. Last summer, Clark got together with friends and fellow teammates and did small group sessions outside.

“The work I did last summer with friends and small group sessions was really helpful in developing my game,” said Clark. “I wanted to take my shooting to another level, and that was the main focus this past summer and fall. I just got as many reps as possible and worked on improving the power and accuracy of my shot.”

Clark was a midfielder when she began her lacrosse career in middle school, and was helped greatly by coach Jen Duckenfield, who recently led Cardinal O’Hara to its first-ever PIAA girls’ state semifinal.

“Coach Duck taught me the fundamentals of the game at her Wednesday night clinics, and challenged me to improve by playing with older girls,” said Clark.

As a 7th-grader, Clark began to follow the Conestoga lacrosse career of Scotty Rose Growney, who recently completed her senior season for the University of North Carolina.

“Scotty has always been a legend at Stoga,” said Clark. “Every game I see her play, she amazes me. Her ability to finish from anywhere and the versatility of her shot is very impressive. I also admire her field vision and dodging ability.”

When Clark became a freshman, she wore uniform jersey No. 15 (the same number that Growney wore at Conestoga) and made the varsity squad.

“It was very intimidating, and Amy Orcutt helped me find my role on such a competitive team and continue to develop into a leader,” said Clark. “My freshman year we had a big game against Harriton, we were trailing and Coach Orcutt put me in at attack because we needed goals. In giving me a chance in such a tight game, Coach Orcutt showed me how much she trusted and believed in me.”

In that pivotal contest, Clark scored a goal with only a few minutes remaining to tie the score.

“Coach Orcutt then called a timeout and wrote up a play which ended with me scoring a goal,” said Clark. “These opportunities she gave me to step up as a young player built my confidence.”

Clark soon realized that the attack position was her favorite spot, and with the added coaching of Bob “Mongo” Mongeluzzi, her career really took off.

“Coach Mongo first saw me play as a [Conestoga] freshman, he saw potential in me and asked me to come to one of his sessions,” said Clark. “I have now been working with him for three years and I would not be the player I am today without his coaching. Before working with Mongo I would beat my defenders by just running by them with a quick speed dodge. Mongo has taught me so many more dodges and different combinations in order to beat much faster and stronger defenders.”

A fine all-around athlete, Clark played soccer for Conestoga as a freshman and sophomore before focusing on lacrosse year-round. She also belonged to the Ski/Snowboard Club at Conestoga, and particularly enjoyed a trip to Killington (Vt.) in January of 2020.

“Snowboarding is my favorite thing to do in the winter – other than playing lacrosse,” said Clark.

This fall, Clark will head south to attend the University of Virginia, where she will play lacrosse. She is considering majoring in elementary education.

“I’ve always wanted to be a teacher,” said Clark. “I found my Child Development class at Conestoga this year very interesting and I have always enjoyed babysitting and working with kids. But I am looking forward to exploring many pathways at UVA.”

Orcutt said, “It has been such a joy seeing Rachel grow as a player, person and leader on and off the field over the last four years.”