All-Delco Girls Lacrosse: Ammerman, Wilson something to hoot about for Agnes Irwin 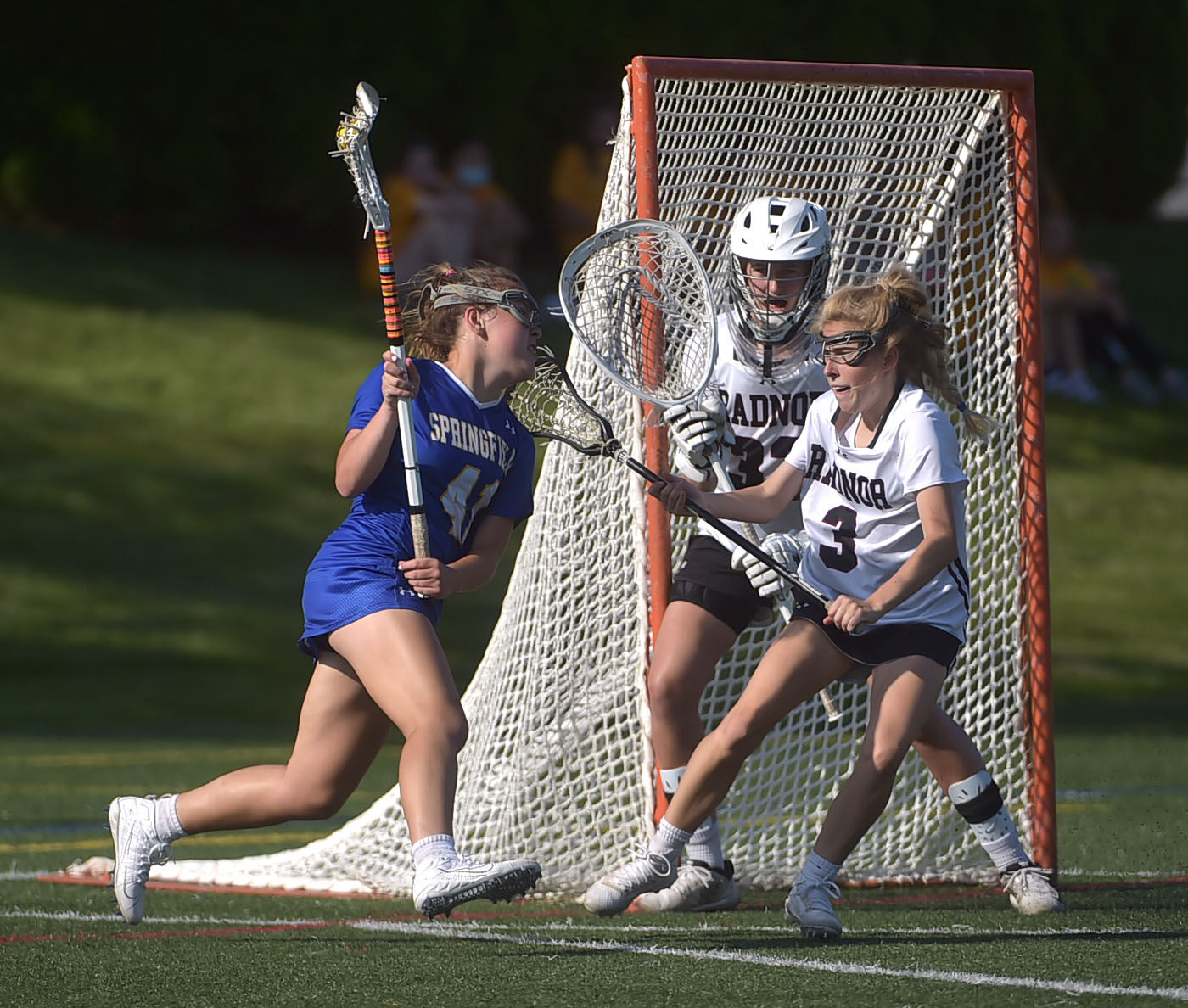 In addition to player of the year Keri Barnett of Archbishop Carroll, the All-Delco team includes:

Bryn Ammerman, Agnes Irwin: The senior attacker helped lead Agnes Irwin to 16 wins and the Inter-Ac tournament title, turning around a 1-3 start with wins in 15 of the Owls’ final 16 outings. Ammerman drove the Owls’ offense, leading them with 40 goals and 45 assists for 85 points. Her assist total is fourth in Delco this season, her points tally seventh. Ammerman went off for three goals and three assists in the first two Inter-Ac tournament games, including a 10-7 win over rival Episcopal Academy, a third win over the Churchwomen. Ammerman also had three and three in the first regular season win over EA. She added a pair of assists in the Inter-Ac final against Penn Charter. She topped out at seven points (three goals, four assists) in besting Germantown Academy. An All-Inter-Ac selection and U.S. Lacrosse All-American, Ammerman will continue her career at Ohio State.

Garnet Valley’s Kaitlyn Stankavage fires what proved to be the winning goal in a 7-6 win over Radnor during the season. (Pete Bannan/MediaNews Group)

Sydney Wilson, Agnes Irwin: The Owls’ engine this year were the Wilson twins, their dynamic midfield presence yielding an identical 54 goals each. Carly Wilson had a team-high 84 controls. Sydney was the facilitator on the offensive end, with 29 assists for 83 points. Both were U.S. Lacrosse All-Americans and have committed to play at the University of Florida. Sydney had a knack for big goals. She scored five times in the second regular season win over Episcopal Academy, then twice in beating the Churchwomen in the Inter-Ac playoffs. She scored in all 20 of the Owls games on the way to the Inter-Ac title.

Ellie Miller, Cardinal O’Hara: The junior attacker was the driving force on the Lions’ historic run through states. With Miller as the leading scorer, O’Hara picked up its first PIAA tournament win in school history, advancing to the Class 2A semifinals and coming within a goal of a berth in the final. Miller was the prime reason why. She finished with 63 goals, 60 assists and 113 points, all team-highs. The point total is fourht-most in Delco this year. She scored five goals and five assists to beat Marple Newtown in the regular season and Lansdale Catholic in the PCL playoffs. She scored four goals and three assists in the first round of states, five and two in a tight game against York Catholic in the quarterfinals and three and two in the loss to Strath Haven.

Margaret Mooney, Radnor: On any given day, Radnor had a plethora of athletic, skilled midfielders who could make you pay. Often, it was the lanky Mooney. The senior was one of the foremost artisans on the draw, controlling 97 on the season. Her virtuoso performance came in the 11-5 win over Manheim Township in the PIAA Class 3A final when she collected nine DCs. Mooney was fifth in Radnor’s balanced attack with 38 goals and fourth in points with 59. She scored four goals and two assists in Radnor’s win over Cardinal O’Hara in the regular season. She added two and four in the states opening win over South Western and two goals and one assist in beating Conestoga for a second straight time in the PIAA semifinal. The All-Central pick and U.S. Lacrosse All-American will play at William & Mary.

Radnor’s Margaret Mooney scored a goal and was dominant in draw controls to lead Radnor to an 11-5 victory over Manheim Township in the PIAA Class 3A girls lacrosse championship game Saturday. (Pete Bannan/MediaNews Group)

Kiley Mottice, Archbishop Carroll: The junior may be Delco’s most purely talented player, as her commitment to the University of North Carolina indicates. Mottice was third in Delco this year in points with 122 points (59 goals and a county-best 63 assists). It’s a well-nigh impossible tally given that in most of Carroll’s 10 Catholic League games, she was limited to just one goal with the Patriots trying not to run up the score. Mottice was the team’s top facilitator; when in trouble, the ball found her stick. She dished 10 assists against Bonner-Prendergast in April. She added seven helpers to dispatch Archbishop Ryan. When let loose, she could also call her own number. She scored six goals and dished three assists in handling PIAA Class 2A rival Bishop Shanahan and six goals in besting neighborhood foe Notre Dame. Mottice went off for five goals and two assists in the Catholic League final, then 12 goals and 10 assists in the first three states game. The peak was a four-goal, five-assist outing to eliminate Villa Maria in the quarters. Mottice was voted an All-Catholic selection and U.S. Lacrosse All-American.

Danielle McNeely, Strath Haven: The Panthers’ historic run to the Class 2A finals in both District 1 and the PIAA tournament was powered by its D&D combo of McNeely and Devon Maillet. While Maillet had the goal-scoring edge with 109, McNeely wasn’t far behind, and she added all the intangibles you could want. McNeely was second in Delco to Maillet in goals scored with 90. She was third in assists with 52. That adds up to a Delco-leading 142 points, for a team that averaged 14.7 goals per game and cracked 20 goals on seven occasions. She added 124 draw controls. The Monmouth signee produced seven-goal games in wins over Haverford and Marple Newtown (the latter with three assists). She had 11 points in the first-round win over Marple in districts. She added four goals and five assists, then five and two in the first two states games. But McNeely’s capstone performance was in the PIAA semifinal against Cardinal O’Hara: Four goals, six assists and five draw controls in willing the Panthers to a one-goal win in a game that rain stretched over two days. She added a goal and three helpers in the state final loss to Carroll. McNeely is a U.S. Lacrosse All-American and first-team All-Central pick.

Kate Stankavage, Garnet Valley: The junior midfielder was the leader in the Jaguars’ balanced attack. She was third on the team in goals with 46, but where the Temple commit shined was on draws, leading the way with 111. With her long strides, once Stankavage controlled the draw, you generally weren’t going to catch her. She had four four-goals games, including in a one-goal loss to Conestoga, and she scored five times to go with an assist and six draw controls in a win over Strath Haven on April 29. She added three goals and three massive DCs as the Jaguars tipped Radnor in the District 1 Class 3A semifinal. Stankavage was voted a U.S. Lacrosse All-American and an Academic All-American.

Tori DiCarlo, Radnor: With plenty of options, Radnor could afford to spread the wealth, with five girls over 35 goals, five with 65 or more points and seven with at least 40 points. DiCarlo was second in goals (48), assists (30) and points (78, tied with Cierra Hopson). But the midfielder had a knack for stepping up at big moments. She saved her best for the PIAA Class 3A semifinal, blistering Conestoga for two goals, four assists and five draw controls to get Radnor to the state final. She had scored four goals against ‘Stoga in District 1 playbacks. DiCarlo scored six goals and three assists to dominate Owen J. Roberts in the state quarterfinals and added two goals in dispatching Manheim Township to help Radnor to the title. Both an Academic All-American and U.S. Lacrosse All-American, DiCarlo will continue her career at the United States Naval Academy.

Dani Falcone, Notre Dame: The senior midfielder was the Irish’s MVP, leading the way with 64 goals, 16 assists and 80 points in 18 games. The Irish went 6-6 in the daunting Inter-Ac and 7-11 with a nonleague schedule that included both PIAA champions Radnor and Archbishop Carroll plus PIAA Class 3A runner-up Manheim Township and District 1 3A champ Unionville. Four of their losses were by one goal. Falcone led the team to a few notable triumphs in among that, scoring six times and adding two assists to upend Agnes Irwin in overtime in March. They also beat Episcopal Academy behind four and two from Falcone. The All-Inter-Ac pick scored five or more goals five times, including in the Inter-Ac playoff win over Springside Chestnut Hill. She’ll continue her career at Columbia.

Garnet Valley’s Kaitlyn Stankavage fires what proved to be the winning goal in the second half Thursday in a 7-6 win over Radnor. (Pete Bannan/Medianews Group)

Ellie Rinehart, Radnor: Radnor’s run to a state title was based on not just its varied attack but defense, where Rinehart was the quarterback. The senior helped Radnor allow a microscopic 4.38 goals per game. Only one team (Conestoga in the regular season) crossed into double-digits, and Radnor responded by holding Conestoga to 17 goals in its next two meetings, both wins. Rinehart led that defense. Avery Ciatto was generally tasked with matching up against the opponent’s top attacker for speed, leaving Rinehart to orchestrate the rest of the defense from near the crease, using her savvy to step into passing lanes and disrupt possessions. Rinehart will attend Loyola University.

MaryRose Berry, Garnet Valley: Berry had a similar role as Rinehart. In Garnet Valley’s case, it was usually Lauren Bendo making flashy plays in defense or drawing a high-profile assignment. But the team’s defensive success was built on the foundation created by Berry on the crease. The Jaguars conceded an average of 5.09 goals per game, not allowing a single team into double digits. The defensive masterclasses that Berry led came against Radnor, a pair of tactical, 7-6 games. The regular-season meeting went Radnor’s way, but Berry was a star on the defensive end in stymying Radnor in the return matchup in the District 1 Class 3A semifinal. Berry, who also starred for Garnet Valley’s basketball and field hockey squads, will continue her career at Saint Joseph’s University.

Elise Palmer, Radnor: The top two teams in the final Super 7 both rotated goalies all season, with both Radnor and Agnes Irwin possessing the luxury of choosing between Division I-caliber netminders. For Radnor, the second halves generally went to Palmer, with Abby Jansen working the opening 25. The 5-10 Palmer is an excellent natural shot-stopper, with a big frame that deters high shots and the athleticism and foot skills to get low. The senior stopped 56 percent of shots to come her way this year for a defense that allowed just 4.38 goals per game and won the PIAA Class 3A title. Palmer made five saves in the second half of the win over Conestoga in the District 1 Class 3A playbacks and two in shutting down Manheim Township in the state final. Palmer will continue her career at William & Mary.