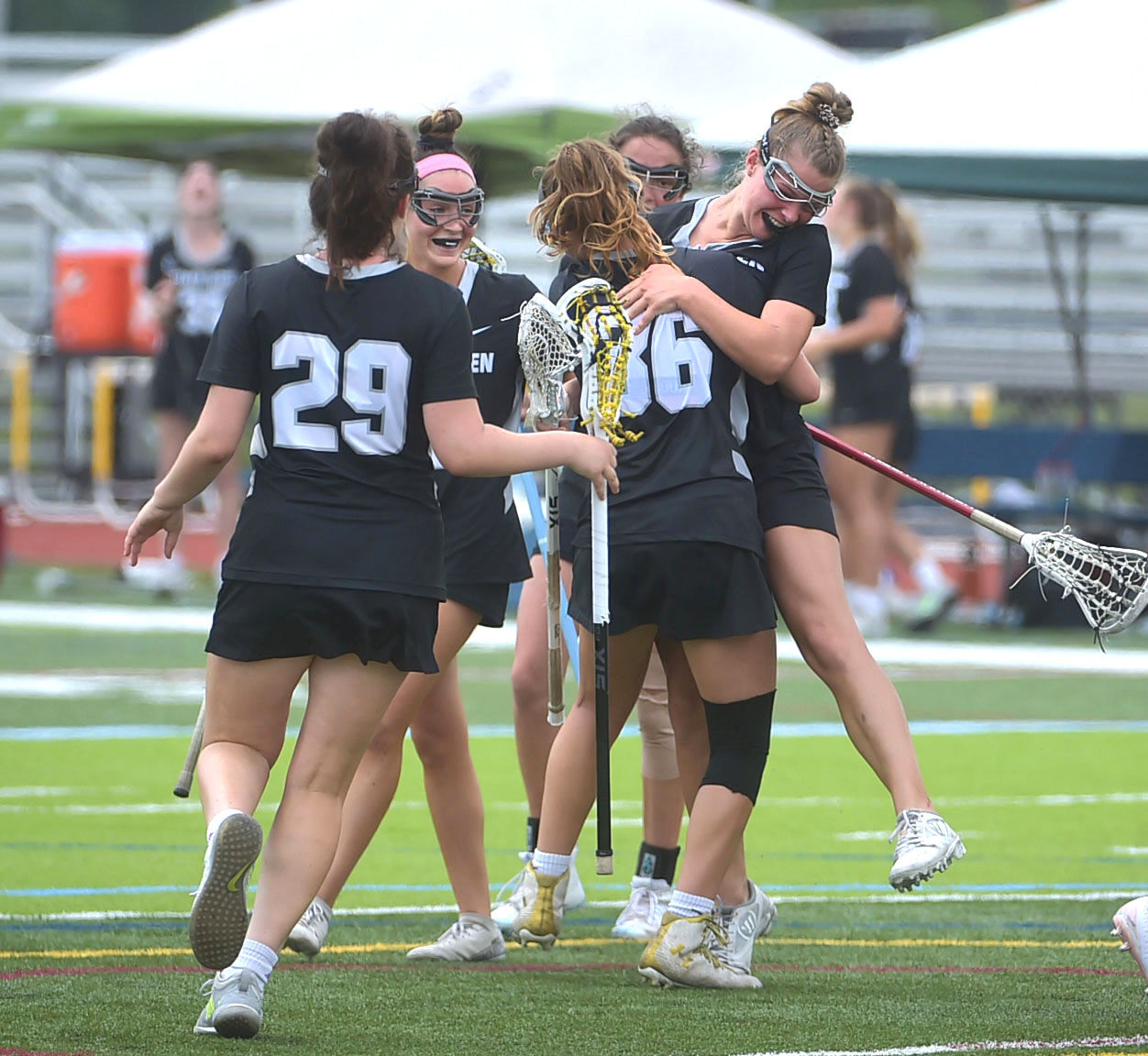 Strath Haven's Laura Conner, right, gets a hug from teammate Danielle McNeely after Conner scored in the second half of the PIAA Class 2A girls lacrosse semifinal against Cardinal O'Hara Tuesday. Strath Haven completed a 12-11 win in the resumption of the game Wednesday. (Pete Bannan/MediaNews Group)

NEWTOWN SQUARE — Danielle McNeely apologizes, warning that she might be a little out of breath.

For most of the last 12½ minutes of concentrated essence of lacrosse insanity, the Strath Haven senior midfielder had been in perpetual motion, the only stillness in the instant when the ball balanced between her stick and that of a Cardinal O’Hara player on the draw.

It took a pile of Panthers to get her to finally stop … or merely pause on the run to Saturday’s PIAA final.

McNeely capped an outstanding individual performance by setting up the game-winning goal from Kaitlin Nieczpiel with 92 seconds left, finally resolving a 12-11 decision for Strath Haven in a Class 2A state semifinal girls lacrosse classic after a 24-hour suspension and resumption at Marple Newtown.

McNeely scored four goals Tuesday in the first three quarters of the game, suspended due to inclement weather with Strath Haven up 9-7 and 12:28 remaining. She tallied six assists, setting up freshman Grace Kelly to restore Haven to the lead with 6:12 left, then feeding Nieczpiel for the game-winner.

“Before the game, we had a real big talk about the game and about trust,” McNeely said. “We knew what to do and how to win the game. We just went out and did it.”

Most importantly, McNeely, Nieczpiel and Devon Maillet had five draw controls each, including three for McNeely Wednesday. Haven (19-5-1) controlled all seven draws in the resumption, a crucial factor in withstanding O’Hara’s surge. It’s also what turned the tide Tuesday, when O’Hara led 7-3 and Haven rallied. In all, the Panthers held a 16-8 edge in draw controls, including 13 straight to end the game.

The timing of Tuesday’s suspension favored O’Hara, which had surrendered six straight goals. They made good on the chance to regroup, and no one benefited more than Rachel Familetti.

Rachel Familetti from 8 meters.
We are tied. 9-all. 6:39 left pic.twitter.com/gjOle2PXKh

Haven held possession and a two-goal lead at the restart, but a Mackenzie Hand save got the ball back for Mia Scarduzio to pot her fourth goal. Hand’s ninth denial of the game, on a McNeely free-position shot, led to Familetti tying the score with 6:39 left.

For the senior Pitt signee, Tuesday was a struggle. She was held scoreless, a rarity this season, with a yellow card and a ringing of the crossbar. But that was out of mind when she lined up from eight meters.

“My teammates are always there to cheer me up,” Familetti said. “They’re always like, Rachel, just get out of your head, you’ve got it. And today was exactly that day. They told me right before I had that eight-meter shot, ‘Rachel this is you.’ Because yesterday I missed two of them and I thought about it and I had to focus on it and they’re like, ‘Rachel you’ve got it, this is your shot, you can do it.’ And that’s exactly what I did.”

Back and forth they went. Kelly took a McNeely feed to put Haven up 10-9. McNeely won the ensuing draw, but Haven’s attempt to bleed the clock became a turnover, allowing Claire Natoli to bounce home her third goal in transition. Maillet won the draw, but Kristen Kutufaris made a sensational trailing stick check to cause the turnover.

“You have to match it,” Kutufaris said. “We were with it at the end of the day, we have to come back, right away, right fast. We were there, we just came up a little short.”

Familetti’s goal would end up being the last time O’Hara touched the ball. Maillet controlled the draw, setting up Conner to tie the score at 11 from eight meters with 1:53 left, beating her Dynasty Elite club teammate Hand, where both are coached by O’Hara’s Jen Duckenfield.

McNeely claimed the next draw. When the double converged, she did precisely what Haven had failed to do so often in the first half – she found the open player, Nieczpiel flashing through the eight, to collect, take three steps around the corner and bury a shot.

McNeely, who’d been tasked with protecting the ball for long stretches earlier as Haven stalled, took it in her iron grasp again, speeding past coverage and absorbing contact until the clock hit zeroes.

Tears were in short supply on O’Hara’s sideline, even for a senior like Familetti, who graduated in the morning. For a program without a states win before this year, falling one goal shy of the state final is a promise of things to come.

Winning with 10: didn’t work.
Illegal screen then a goal by Claire Natalie. Tied at 10. 3:29 left pic.twitter.com/EmNQrgdeuv

“With COVID, everything was very sad,” Familetti said. “But we were very grateful to have a season. O’Hara lacrosse definitely made history, making it in the first round of states. And losing after making it this far is very upsetting, but I’m glad we got to make it this far, especially with such a great team and great teammates and a great coach and everyone that has supported us the whole way.”

Haven was last in a state final in 2012. It’s long enough ago to feel like a first for this contingent.