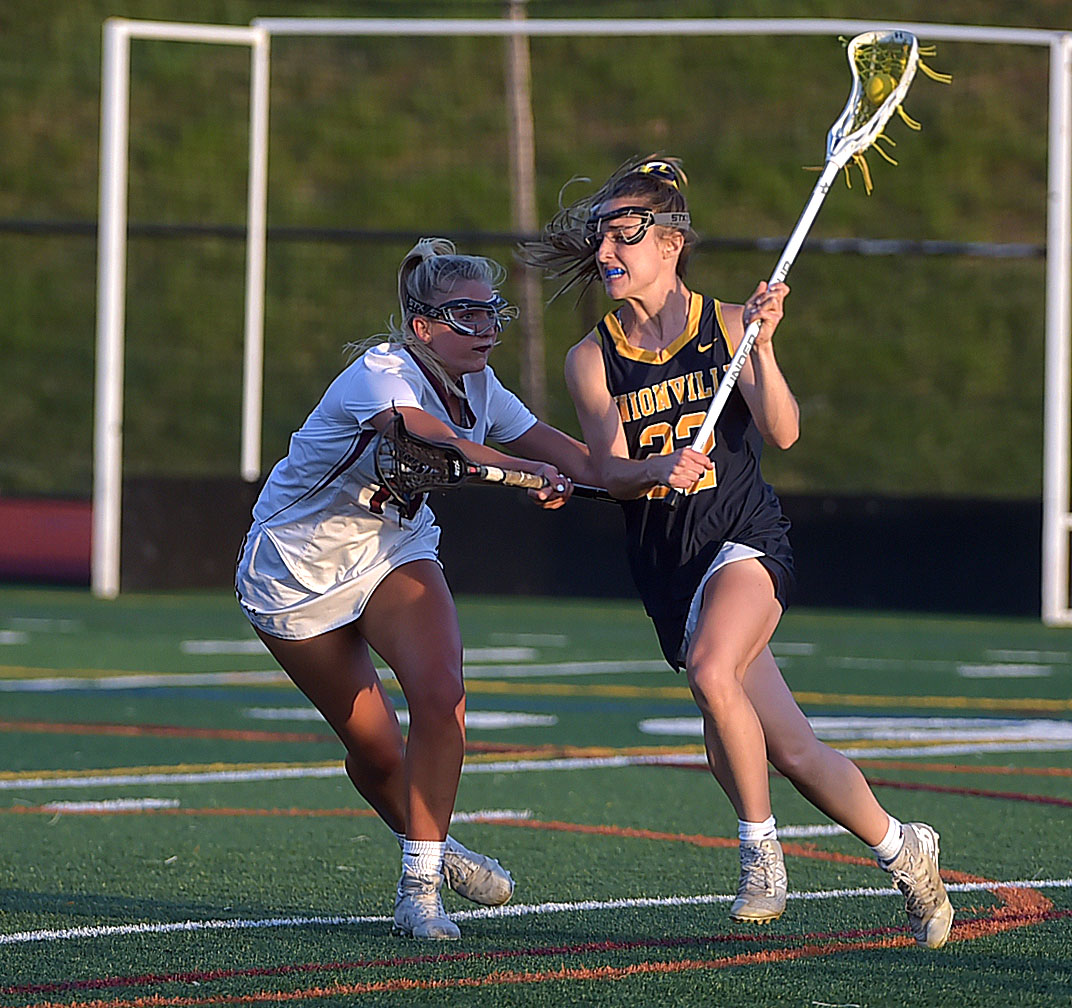 Downingtown >> District 1 3A girls’ lacrosse champion Unionville opened the PIAA 3A state tourney Tuesday against a Great Valley squad with a tough defense, and the Longhorns handled it adeptly for a 13-6 win at DiSerafino Stadium.

“Great Valley has a very aggressive defense that came out, and was sliding and was communicating well, so we had to execute,” said Unionville head coach Tara Brown.

One of the keys to solving Great Valley’s defense was senior tri-captain Riley Glackin, who will be playing lacrosse for Coastal Carolina next spring.

“Riley is our complete composure player on attack,” said Brown. “She’s able to control the pace of the game and settle us down when we need to. She can handle the pressure that Great Valley was throwing at us, with her speed and with her stick skills. That was a key part of our success today.”

Glackin, one of three Longhorns who scored a hat trick Tuesday, said, “I want to give props to Great Valley’s defense, they played us tough the entire game. It was so important for us to keep our composure and keep communicating with each other, because once we keep the energy on our side, it doesn’t go any other way, and we can keep it rolling.

“This was such a team effort, everyone contributed on both sides of the field. It’s really exciting.”

With the victory, the Longhorns (21-2) advance to the PIAA 3A state quarterfinals, where they will face Conestoga Saturday. Unionville handed Conestoga its first defeat of the season in the District 1 3A semifinals, then the Longhorns went on to win the district title with a 9-3 victory against Garnet Valley in the championship finals.

On Tuesday, Unionville got off to a 4-0 lead in the first 14 minutes of play. The first goal came after a Great Valley turnover, with junior Maddie Passarello scoring just 1:45 into the game. Unionville sophomore Delaney Harlan scored the second goal, Passarello tallied the third (assisted by Glackin) and Glackin fired one home from 8 meters to give the Longhorns a 4-0 lead with 11:08 left in the first half.

At halftime, Passarello had a hat trick, and the Longhorns held a 7-2 lead.

“Maddie really took her time today, did the right cuts, and we were able to find her and she put the ball into the back of the net,” said Tara Brown.

Early in the second half, Great Valley’s offense began to heat up, and sophomore midfielder/attack Kaitlyn Giandonato scored twice to cut Unionville’s lead to 8-4 (Giandonato had three of the Patriots’ goals at that point).

Great Valley junior midfielder/defender Sydney Lavin scored to cut the Longhorns’ lead to 8-5 with 14:49 left in the game, then Unionville turned it around with a 5-1 run for the remainder of the contest.

With 12:17 to play, Unionville junior Alexis Brown made a key interception, and less than a minute later Dietrich scored to make it 9-5. Longhorn sophomore Anna Brown tallied from 8 meters to give her team a 10-5 lead with 10:28 left in the game.

Great Valley sophomore midfielder Sophia Geibel scored to cut Unionville’s lead to 10-6 with 6:26 left, but 33 seconds later Glackin whipped in a goal after a long run to make it 11-6.

Garvey scored her third goal of the game with 4:21 to play, and Longhorn junior Kenzie Malloy closed out the scoring with 2:35 left.

“It was a complete team effort,” said Tara Brown. “We got across-the-board scoring, and defensively we were able to hold down Great Valley’s threats. Great Valley is a very good team, very tenacious, but I think that, overall, our intensity and our composure were key to winning this game.”

The season ends for Great Valley (16-7), who finished sixth in the District 1 3A tourney.

Great Valley head coach Kim Wenger said, “I think our growth over this season was remarkable; I don’t think, coming into this season, anyone expected us to be as bonded and as jelled as we are now. With this being a young team that had no season last year, I think this was a great year for our team.

“I told the seniors [after the game] that they provided great leadership, which was a core reason for the success we saw this year. They are responsible for the culture and success that we were able to build over one year.

“I reminded everyone returning [next year] to not forget about this feeling of losing in the first round, of ending the season after a game where they could have played a little bit better as a team. It was an unfortunate ending, but they had a great year and I think [the players] are all proud, as am I.”