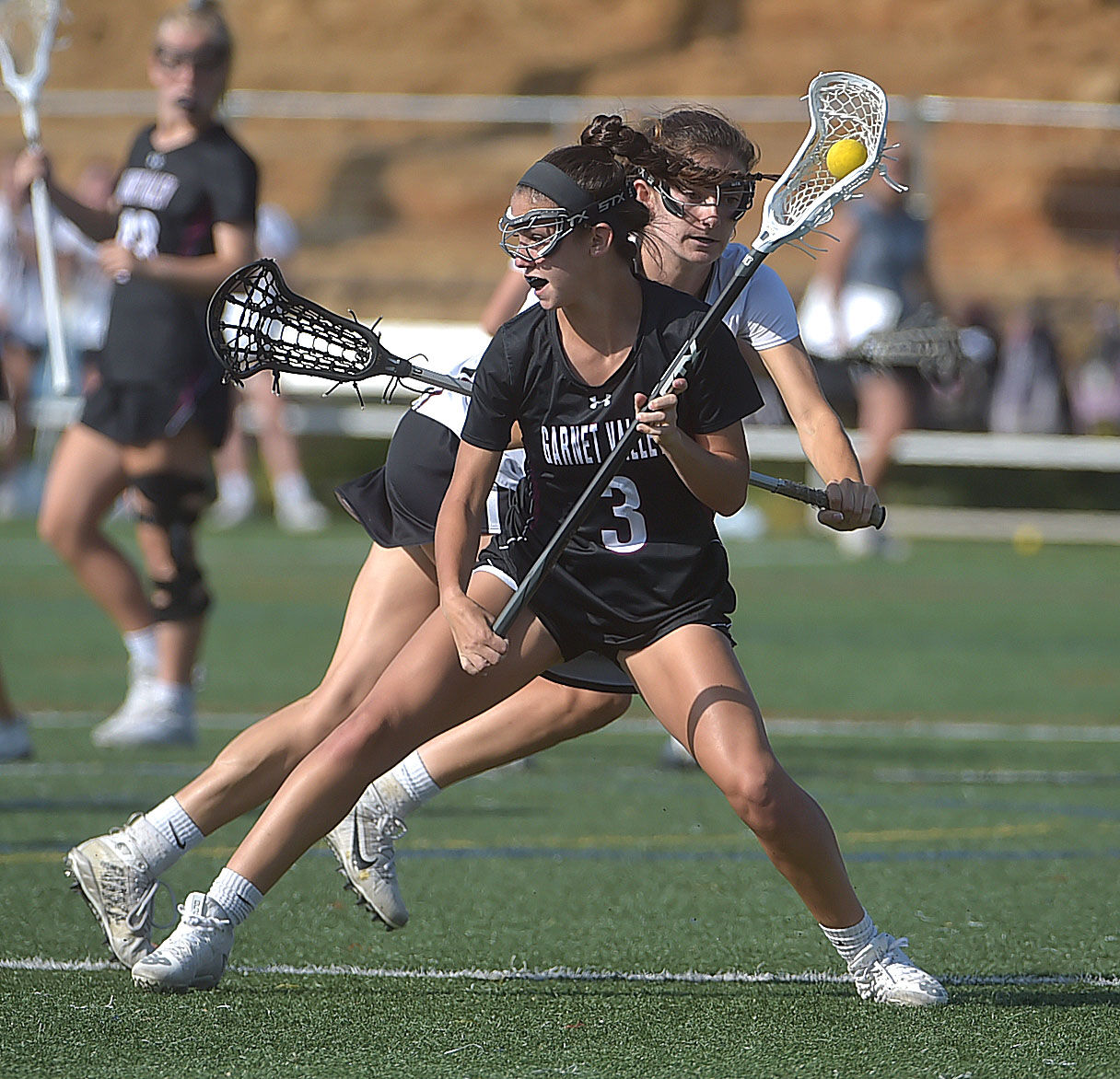 RADNOR — Whatever Jenny Purvis had planned to say to her Garnet Valley girls lacrosse team at halftime, Maddie Kalish ruined.

As the GV coach mulled over the intermission talking points in the final minute of Tuesday’s District 1 Class 3A semifinal, the Jaguars faced a three-goal deficit. Thanks to Kalish, when the final horn sounded, the spread was trimmed to one.

The final huddle convo proved successful, since the next time the Jaguars convened was when a spent Kait Henning careened into Purvis’ arms on the sidelines at the final whistle, the third-seeded Jaguars pulling off a 7-6 victory.

The momentum shifted in the final 20 ticks of the first half, when Kalish scored from eight meters, won the ensuing draw and started a tic-tac-toe goal through Sydney Pyon to Kate Stankavage with a solitary second left.

Maddie Kalish plants one from 8 meters. We are tied at 5. 4:12 into the 2nd half pic.twitter.com/Zc1GicwmcG

“That kind of shows how much we work together and how much we hype each other up every single time anybody does something, no matter how big or how small, we all have each other’s backs,” Kalish said.

That spurt sparked a five-goal run, all authored by Kalish and Stankavage. The teams traded lengthy possessions early in the second half before Kalish tied the game from eight meters at 20:24, completing her hat trick. Stankavage put GV up for good with the most beautiful goal of the day, Kalish finding the cutting mid on the crease to catch and fire home in one devastatingly fluid motion at 19:22. Then Stankavage, who had a team-high three draw controls, added the seventh at 17:22.

In a game this tight, a 5-0 run felt closer to 10. The architect was Kalish, who lingered after each timeout in conversation with Purvis to fine tune the team’s attacking strategy. The changes proved decisive.

“I think it was just working together, use the clock, that was a big one for us,” Kalish said. “Sometimes we find ourselves wanting to just go to goal right away but we know we have to be patient, work the ball around and work together. It’s seven people out there, not just one.”

Also crucial was another halftime change: Sierra McLaughlin struggled in the first half, allowing five goals on six shots, a rarity for the veteran goalie who last week celebrated her 200th career save. So Purvis turned to Mak Butler.

Butler was only required to make two saves. But both were massive. She stepped out of her crease to confront a cutting Sheila Esgro and deny her shot high early in the half. Then with GV up 6-5, she stood tall to body away an Esgro effort. Seconds later, Stankavage made it 7-5.

“I just was thinking of more of, if she (Purvis) didn’t trust me, she wouldn’t put me in,” Butler said. “But I knew that the rest of the team had my back and if I was going in, there was a reason and they would be there to help me along the way.”

Garnet Valley’s long run kept No. 2 Radnor (17-2) from re-establishing its rhythm. It led 3-1 when Cierra Hopson found Esgro cutting in the area, a reversal for the first goal. Then when Kalish narrowed the margin back to one, Karis Mameniskis deposited two goals from eight meters 54 seconds apart to make it 5-2.

Garnet Valley’s Kaitlyn Stankavage fires what proved to be the winning goal in the second half Thursday in a 7-6 win over Radnor. (Pete Bannan/Medianews Group)

Particularly against a disciplined Garnet Valley defense, free-position looks are hard to come by. But the decisiveness with which Radnor cut made a difference, as did when they lost that touch late.

“In the first half, it was going as hard as we can to the goal and getting those eight-meter calls,” Mameniskis said. “One-v-ones really worked because they didn’t send the second slide, so it was against one person. In the second half, it kind of fell apart but we got a lot of eight meters.”

Radnor got back within a goal with 5:01 to play, finally cashing in on a second GV yellow card with Margaret Mooney lasering a high shot past Butler. But Stankavage won the next draw, setting off nearly five minutes of her, Pyon, Henning and Kalish running for dear life.

In what was functionally the second of three potential meetings between the Central League rivals, the Jaguars exacted revenge for a May 4 loss by the exact same score. For Mameniskis, the shoe is now on the other foot as states loom.

“I feel like now we want to beat them even more,” she said. “Last game, when we beat them, they had it out for us and wanted to beat us so badly. So I feel like it’s kind of switched roles now and we have that.”

As for the Jaguars, Thursday’s district final becomes the task of prime importance. But after feeling that they could’ve played much better against Radnor in their first meeting, the bigger takeaway is a sense of just what that better performance looks like for 50 minutes.

“We all knew we wanted to play to our full potential, no matter what that was,” Kalish said. “If we all just put it out on the field, we wanted to figure out what could happen. And that’s what happened, I guess.”