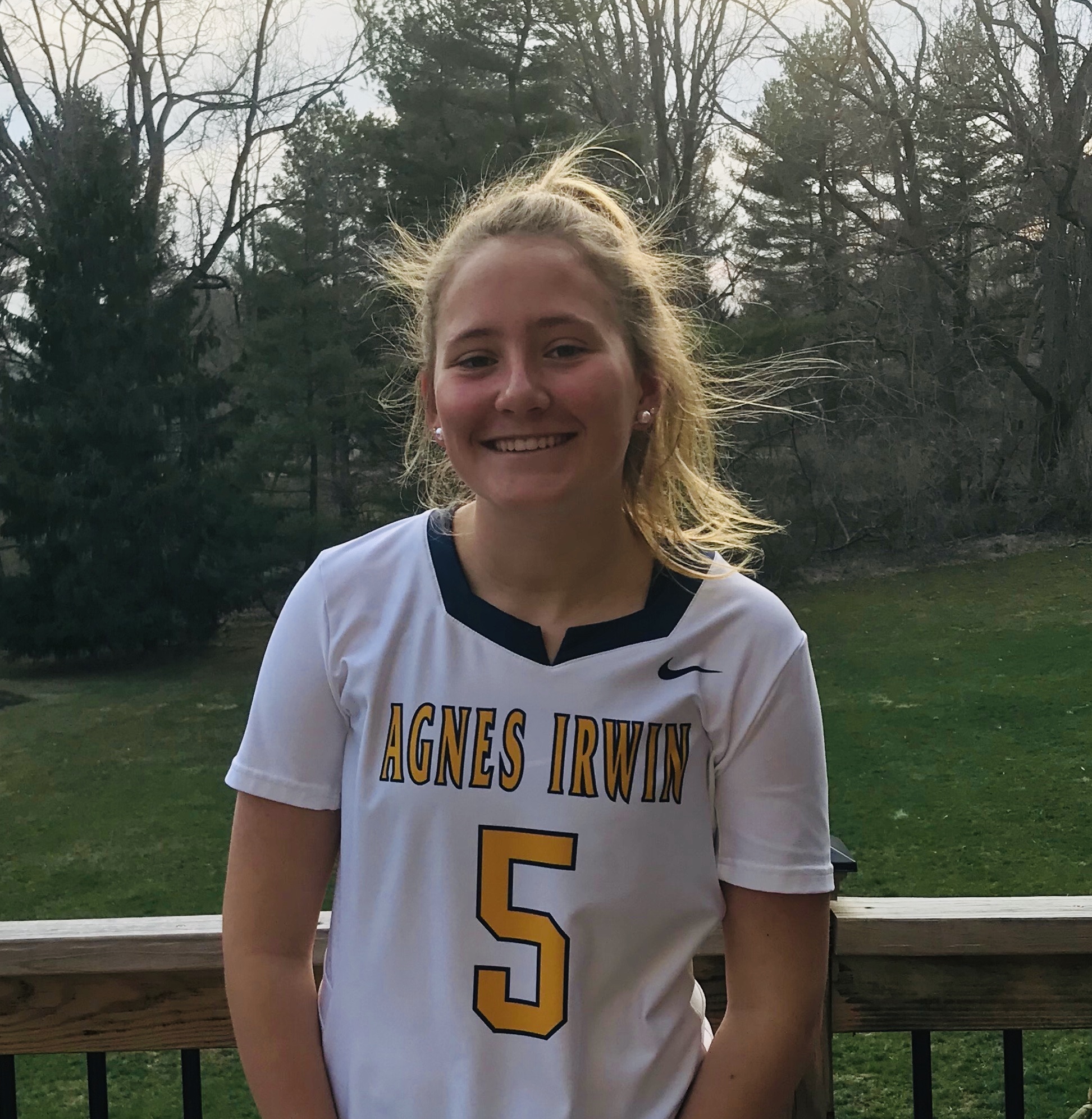 NEWTOWN SQUARE – You could forgive Episcopal Academy for thinking there were two Carly Wilsons on the field Friday afternoon, for the way the Agnes Irwin junior covered the entire field.

It’s an even more dispiriting thought given that there is another Wilson: Twin sister Sydney. And between the two of them, it was enough to make EA dizzy.

The Wilsons had a hand in 11 goals between them as Agnes Irwin scored 10 times in the second half to register an 18-13 Inter-Ac League win.

The method from the Wilsons was less divide-and-conquer than playing off each other’s strengths. Friday, that meant Carly Wilson working the draws for a game-high eight draw controls. Sydney Wilson did most of her damage in the area, with five goals and an assist. Carly Wilson added four and one.

“We really enjoy working together, so us being able to work together and throw off defenses that way is really nice,” Sydney Wilson said. “All of our girls are wide open if we dodge from up top, so we can hit them and get them involved.”

The draw control adjustment was huge. EA led 3-1 less than four minutes into the game thanks to four consecutive draw controls by Sarah Groark. The Owls would win 18 of the game’s last 28 draws, via Carly’s eight and three from Sydney. Katharine Ernst, who was often in the middle, added five DCs.

Ernst’s chemistry with Carly Wilson in particular proved vital, with a couple of draws in which Ernst popped the draw up to hit Wilson in stride going toward goal.

Both twins exploited an edge for Agnes Irwin Friday: It had the speed advantage, particularly when dodging downhill at an EA defense trying its best not to be flat-footed. Too often, it didn’t matter, with a Wilson getting a step, shrugging a defender and running or around would-be checks. When their progress was stopped, they were able to get others involved.

“It’s so fun. We love playing fast,” Sydney Wilson said. “That’s our goal, to be able to push it up, push fastbreak and if we don’t have fastbreak, slow it down.”

The proof was in the states: 10 goals on 11 total shots in the second half, a lethal level of finishing.

Sydney Wilson scored 23 seconds into the second half to restore a two-goal lead at 9-7. When EA got closest at 9-8, Carly Wilson drew a yellow card and scored on a free-position shot to make it 10-8, and Agnes Irwin roared away from there. Carly Wilson later picked up a yellow and, in a testament to the kind of speed the Owls play with, nearly took a feed and scored without breaking stride on the way out of the penalty box.

The turning point of the game arrived in the second half. Groark scored three times in the first half, including the 100th of her career, to keep EA in touch. They tied the game at 4, then trailed 7-4 but rallied via a Bella Piselli goal to make it 8-7 at the half.

Sydney Richter pegged back Sydney Wilson’s tally to make it 9-8, but then two things went against EA. First was Agnes Irwin goalie Paige Crowther who made four saves on the same possession, twice denying Alexa Capozzoli, including a bid low on a free-position shot, and twice stoning Alexis Ventresca

“Paige really killed it in there,” Sydney Wilson said of Crowther, who made five saves. “She had a bunch of really nice saves and kept us in it. I think that really helps our momentum, us being able to have such strong goalies, it helps us get out of the back and get the ball up.”

Seconds later, Carly Wilson headmanned a rush and drew a yellow card on Lainey McGonagle. With EA down a player, The Owls scored five times, turning a 9-8 game into a 14-8 margin.

“I think that’s what really killed us,” Groark said. “I think we were really strong until then and they capitalized on a lot of their fastbreaks which, kudos to them, I thought they played that really well. But that definitely threw a wrench into the comeback.”

EA battled back within four and got a chance on the man-advantage with Carly Wilson shown a yellow, allowing Capozzoli (team-high five goals) to grab one back. But a huge ground ball by Alex Lesko got Agnes Irwin the ball back and set the stage for long stretches of possession late.