Owen J. Roberts runs out of time against Manheim Township in PIAA opener 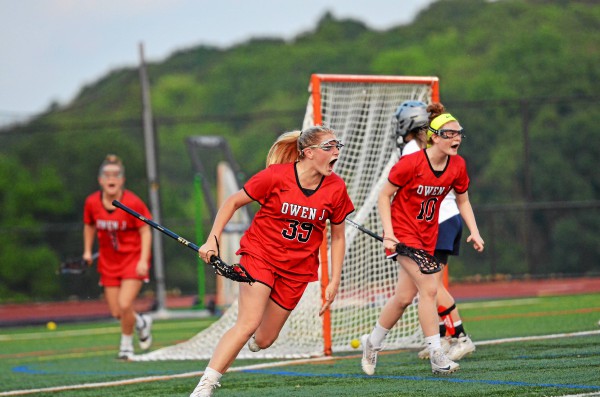 EXETER >> All season, Owen J. Roberts’ team phrase ‘We All We Got, We All We Need’ had taken them to this point.

Yet on Tuesday night, what the Wildcats really needed was a bit more time.

Owen J. Roberts staged a late rally and held the possession in the final moments before coming up just short in an 8-7 loss against Manheim Township during the opening round of the PIAA Class AAA playoffs at Exeter Township High School. After a two-goal swing in the final seven minutes made it a one-goal game, the Wildcats secured the ball with less than a minute to go in regulation. Late in their possession, sophomore attack Hannah Delahaye took the ball at the top of the crease and drove in before she was swallowed up by a pair of Manheim Township defenders. After pulling it out, she hit a cutting Danika Swech who sent a laser at the net, only to be stopped by goalkeeper Haley McCullough with seven seconds remaining.

“I knew we needed a big stop in that moment,” said McCullough, a senior with the Blue Streaks. “We played them earlier this season and knew that they’re a good team with a lot of good players.”

With the result, District 3 champ Manheim Township (23-1) advances to the second round where they will take on the winner of State College/Sewickley Academy on Saturday at a site and time to be determined. The No. 6 seed from District 1, Owen J. Roberts’ season comes to a finish at 18-7. The Wildcats had won their state playoff openers in each of the previous two seasons only to fall in the second round both times.

“I’m bummed for our team, that they have to go out this way,” said OJR coach Casey Kellogg. “I think we had some lulls in that game, a couple stretches where we didn’t win the draws. Those little things hurt us coupled with too many turnovers.”

Making her return from an illness that had sidelined her the previous two district playoff games, Delahaye proved to be a key contributor for OJR. The sophomore, a transfer from Hill School, scored four times — including the game’s final tally off a feed from Kelsey Kilgallon with 2:59 to go to make it a one-goal game. “She was huge for us,” said Kellogg. “She practiced yesterday and was a bit out of it, not having played a lot. So her impact today could have gone either way, really.

“I think she was excited to be back out here and it really showed. She brings a charisma — when Hannah’s out there, you know it. The way she celebrates and plays, it really amps the team up.”

Manheim opened up the game with a long, drawn out possession capped by a free position score from Taylor Kopan three minutes in. Less than a minute later, Maddi Koury found a cutting Kilgallon from behind the cage to even it up at 1-1.

A couple minutes later, Delahaye showed the Wildcats what they had been missing when she finished a free position then scored off a feed from Maddi Koury less than a minute later to make it 3-1.

From there, though, Manheim rattled off three straight goals — two off the stick of Maris Large — over the next 11 minutes before Delahaye scored her third goal with a minute left to make it 4-4 headed for the half. After a score from Danika Swech five minutes into the second half, it was all Manheim. The Blue Streaks dominated the possession over the next 10 minutes of the second, mixing in two goals from Large along with finishes from Lucy Svetec and Lizzie McBride on the way to an 8-5 lead that easily could have been more if not for a couple big stands from Cayden Jarvis in net.

Trailing by three, OJR didn’t go quietly into the night.

With just under seven minutes to go, Koury scored off a give from Eloise Gebert. Then four minutes later, Delahaye scored her and the game’s final goal before McCullough stepped up and made the much needed stop in net for Manheim. Members of Manheim Township gather around goalie Haley McCullough at the conclusion of Tuesday’s 8-7 win over Owen J. Roberts during the opening round of the PIAA Class AAA playoffs. (Thomas Nash – Digital First Media)

“She’s a special goalie,” said Manheim head coach Mark Pinkerton. “She’s different from most goalies because she was a field player who converted to goalie two years ago. So she understands where she needs to be and where her teammates need to be.

“That goes a long way for her and for our defense in front of her.”

Now it remains to be seen just how far McCullough and the Blue Streaks can take Manheim.